How sweet the future of aviation 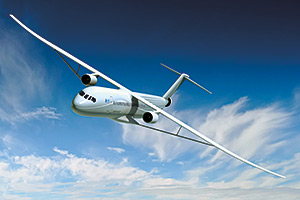 Normally, your average sugar rush doesn’t last a decade. But the last nine years for Boeing’s partnership with NASA on Subsonic Ultra Green Aircraft Research (SUGAR) has brought about promising developments for the future of aviation.

The original SUGAR project began with a brainstorming session in December 2006.

I pondered what Boeing could do to make our aircraft more environmentally friendly. So, I assembled some colleagues, and we generated a list of ideas that included alternative fuels, electric aircraft, and improved aerodynamics, propulsion and sustainable materials. We also came up with the name SUGAR. In this original form SUGAR stood for Sustainable Ultra Green Aircraft Research. After narrowing the list of ideas, the team worked on quick tools to assess the ideas and quantify the possible benefits.

Then along came a NASA request for proposals on subsonic aviation concepts and technologies that could help meet these goals in the 2030-2040 timeframe:

At the beginning, none of us thought we could reach those levels. Because of the work we had just done in the brainstorming activity, we were able to respond quickly with lots of green ideas and add quantitative results. Combining many ideas, and adding a healthy dose of improved air traffic management as well, we were able to show it was possible to get close to these goals.

After winning the contract, deemed Phase I, three additional phases were awarded. The original goals were adjusted between each phase, but NASA always tried to keep the goals just ahead of what the team thought could be achieved.

From SUGAR has come ideas for multiple concepts and technologies:

SUGAR Volt—the first concept for a hybrid electric commercial airliner. This played a major role in electrifying the current interest in small and large electric aircraft at companies, government labs and universities around the world. Much like a hybrid car, the SUGAR Volt is able to decrease fuel use and substitute electrical energy, which if from a renewable grid source (wind, solar, etc.), can significantly reduce the life cycle greenhouse gas emission of a conventional airliner.

Recently, Boeing was awarded a new contract to continue studying the SUGAR Volt and a NASA hybrid electric concept called the STARC-ABL (single-aisle turbo-electric aircraft with an aft boundary layer propulsor). Boeing is interested in developing environmentally progressive vehicles, but it’s too soon to say whether any of the concepts that have been studied under this contract will be incorporated into Boeing aircraft. Except for Boeing proprietary technology, the knowledge NASA gained in collaboration with Boeing from this research is publicly available.

In 2016, the Subsonic Ultra Green Aircraft Research (SUGAR) program reduced drag by six percent without affecting weight relative to previous analysis of the Transonic Truss-Braced Wing. The total benefit of this technology has the potential to provide 8 to 10 percent fuel consumption reduction relative to an equivalently configured conventional baseline at Mach 0.75.

Phase IV of the program, which kicked off in January, focuses on the next hurdles: increasing the high-speed design to a more conventional Mach 0.8 cruise speed and investigating the low speed characterizes of the high aspect ratio wing with truss-bracing. With every phase of the program, strides are made to mature the concept with a long term goal of a flight test under the NASA UEST demonstrator program.

In the previous SUGAR phases, engineers worked with NASA to focus on the structural aspects of the Transonic Truss-Braced Wing. After a year of design work on the concept, NASA and Boeing engineers tested a 7.5-foot wing span model at the NASA Ames Transonic Wind Tunnel in Mountain View, California, producing successful results and valuable data.