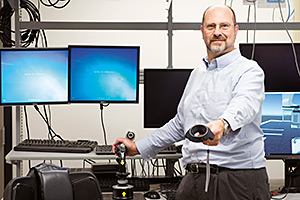 Are you promoting fun and games at work?

I research how to make training better and I’m saying that we learn better—more productively and with higher quality retention and later application—when we learn through having fun.

Games have been used for teaching for thousands of years. For example, the games Chess and Go were actually created to teach battle strategies. The term “serious game” was coined to represent games that are designed for a purpose other than entertainment.

The customers for my team’s research include instructors, instructional designers, training developers and simulator developers. They see how much more motivated and engaged their students are in games than in class.  So my customers asked me to find out how to incorporate elements of games into their training or training devices. I began by examining the vast research into serious games and merging instructional design principles with game design.

How would you describe advanced learning?

The history of human learning is as old as the history of humans. Written theories on how people learn and how to make the learning experience better go back at least to Socrates. The ability to monitor the brain in real-time through electroencephalogram (EEG) and functional magnetic resonance imaging (fMRI) have allowed us to see that most learning theories were correct, but a little too narrow.

An epiphany came to me from studying more about goals, optimal performance, and the theory of the psychology of flow:

The reason why games are fun is that the players actually learn while playing. Scientific research of games shows players are motivated to play because the game provides an environment in which the players learn and improve. In other words, games are fun because players learn. Humans (and possibly other animals) are genetically programed to get pleasure from learning. Once you have stopped learning from Tic-Tac-Toe, it is no longer fun. When someone learns all they want from Chess and stop improving, the game is no longer fun. Those who feel they can still get better and learn from playing find the game fun for many years.

Instead of a mindset that students (of all ages) do not learn because classes are boring, we should realize that classes and training are boring when there is little opportunity for students to learn.

What makes training most effective?

Research suggests that people are happiest when performing at their peak. They describe a state of ultimate performance as being “in the flow.” Mihaly Csíkszentmihályi discovered that there are three conditions of flow: the person is actively involved in a task with clear goals; progress toward goal can be measured and the person receives immediate feedback on the progress; and the perceived skills required for the task are aligned with perceived abilities. (“I’m trying to achieve something difficult, I think I know how to get there, and I believe with more work, I can.”)

In Steven Kotler’s 2014 book, The Rise of Superman: Decoding the Science of Ultimate Human Performance, he states that frequent flow experiences can “shorten the learning curve.” This is evidenced by studies, such as one in 2011 by the United States' Defense Advanced Research Projects Agency (DARPA), in which flow reduced the amount of time to teach novices to become experts by 50 percent.

Enabling these flow conditions has been the goal of our advanced learning research.

What remains hardest when it comes to learning and teaching?

Despite extensive research, training to overcome cognitive biases has proven largely ineffective. Critical decision-making in the face of uncertainty is difficult because participants employ heuristics that are unconscious and subtle, but which can produce very serious impacts. It has often been demonstrated that even cognitive bias experts make judgment errors by falling prey to the very biases they study.

But we are making headway. My team at Boeing designed and developed a video game (“The Enemy of Reason”) to teach cognitive bias recognition and mitigation as an alternative to current multi-semester classroom methods. U.S. government assessments indicated that our game was effective for learning to recognize and mitigate the effects of bias. In particular, eight weeks after learning, the students that learned using the game were able to recall and apply the knowledge better than those who had not.