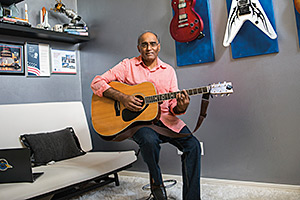 Kauser Imtiaz is a Boeing structural engineer who works on manned space flight programs. Outside of work, he has varied interests including Pakistani and Indian music.

Kauser Imtiaz was an impressionable teenager in 1969. Seated in front of a grainy, black-and-white, neighborhood television set in his native Pakistan, he watched with awe as humans set foot on the Moon for the first time.

He could barely make out the images on the screen—yet he sensed the moment had united the world. He was so inspired by this achievement of aerospace, Imtiaz decided then and there he would be a part of it.

“I still remember many elders were in disbelief, saying, ‘This is hoax; it is impossible,’ ” Imtiaz said. “But hearing that man had landed on the moon, the young ones were excited. We were dancing. Earth seemed to be a very small and happy place.”

Imtiaz had even greater incentive to realize this dream once those same American astronauts came through Pakistan on a triumphant world tour. He got to see a piece of lunar rock that went on display at a museum in Karachi.

Immediately following his high school graduation, Imtiaz left for the United States to pursue an education in aerospace. Naturally curious, he was determined to immerse himself in life-changing events, as well.

“You never know what you’ll find when you look into the unknown,” he said.

Today, Imtiaz is an American citizen and a Houston-based Boeing Technical Fellow, a structural engineer tasked with unraveling complex issues that surround the International Space Station and manned space flight.

He advises Boeing teams working on the Crew Space Transportation-100 Starliner, expected to provide continuous manned flights to the International Space Station, and the Space Launch System, which could ferry people to Mars.

“He’s pretty much our go-to guy when we have a really challenging issue,” said Deneen Taylor, NASA manager for International Space Station structural engineering. “He’s not just an all-around nice guy, he’s brilliant and he’s always willing to step in and help out. He’s never denied us when we’ve asked for his help. He’s always been willing to do what it takes.”

During an assembly analysis, for example, Imtiaz found structural weakness near berthing ports that connected all of the Space Station modules together. Working challenging hours, he and his team provided a solution that prevented a costly redesign and a lengthy program delay, according to Dave McCann, Boeing senior manager of space structures and flight-control mechanisms, and a former NASA structural engineer.

“It was very much a showstopper kind of failure of basic structural design,” McCann said. “Kauser led a team that did all of the analysis, modeling and testing to determine the best way to fix the problem—which turned out to be kind of elegant and amazing, and saved a lot of work not to redesign the whole interface.”

From then on, Imtiaz and the Space Station have been invariably linked. He claims to intimately know every inch of the massive spacecraft, which is similar in size to a regulation football field. He welcomes the pressure of keeping it structurally sound at all times.

“The more challenge I get, the better I get,” Imtiaz said. “My productivity shoots up when I’m under stress. My thinking gets faster. I don’t get panicked or get concerned; I just focus and I get things done. I enjoy that.”

On another occasion, a solar panel came unhinged on an orbiting Space Station, creating a precarious situation. Imtiaz produced a fix that he tested on a duplicate solar panel on the ground. A step-by-step solution was sketched out and sent to the astronauts on board—cut a pair of holes in the sheet metal and braid electrical wire through them to create what resembled large cufflinks. U.S. astronaut Scott Parazynski performed the delicate repair during a spacewalk, using an insulated stick to tie the torn panel and prevent electrical shock.

Out of gratitude, Parazynski gave Imtiaz a keepsake—a piece of red ribbon he wore around his leg that distinguished him from other spacewalkers.

“We saved the solar panel,” Imtiaz said. “We didn’t have to jettison it and launch a new one. We have done a lot of things like that.”

Imtiaz also created a unique software tool that analyzes the Space Station’s 10,000 structural joints. It reduces 10-12 hours of work to 10 minutes or less. It has saved millions of dollars, according to program managers.

This software goes a long way in predicting fatigue and failure. People throughout NASA and Boeing have grown to depend on it, McCann said.

Users became so trusting of Imtiaz’s software tool, “we floated it out to other areas and use it on other space vehicles,” McCann explained. “It’s really had a big impact on the space industry for manned space flight. He keeps improving it.”

As he planned, Imtiaz was educated in the United States, earning an Aeronautical Engineering degree from Parks College of St. Louis University, and his Masters in Aerospace from Wichita State University. He obtained a private pilot’s license and an FAA airframe and power plant mechanics license.

Imtiaz came to Boeing in 1987, joining the C-17 Globemaster III program in Long Beach, California. He previously worked as an aircraft engineer for the Saudi Royal Fleet in Jeddah, Saudi Arabia, and for Beech Aircraft in Wichita, Kansas. He later worked on Boeing helicopters in Arizona and Pennsylvania.

This journey brought him to the International Space Station program and Huntsville, Ala., in 1991. It was what he envisioned more than two decades before—when that neighborhood TV set took him to the moon and back.

“The pride of my work is working on the manned space program,” Imtiaz said.

He has plenty to keep him busy. The Space Station was designed to be in use for 15 years, but the robust spacecraft is re-certified structurally through 2028—which would make it operational for 30 years. Imtiaz shares in the different phases of life-extension analysis for the Space Station, and in testing in which they “excite” the structure in space to see how it responds.

While space keeps a firm hold on him, Imtiaz is similarly well defined by his wide range of personal interests and hobbies. He is deeply involved in Pakistani and Indian music, which he describes as “East-West fusion.” He plays keyboards, guitars and several other instruments. He has a studio in his home. He has played in different public venues, among them a Houston hotel in front 1,000-plus people and a half-dozen universities.

He’s also a dedicated photographer, shooting natural light, nighttime and airshow images. He writes poetry and reads and collects books. And he acts as an engineer at all times.

“I get into everything, from appliances to my cars to my electronics,” Imtiaz said. “I just feel I have to figure things out and to learn and to fix things, or at least try.”

Imtiaz has traveled the world exclusively to discuss the latest space developments, most frequently to Russia, Italy, Germany and Japan. He has met and worked with several American astronauts, among them John Young, who walked and drove a lunar buggy on the Moon, and presented Imtiaz with a NASA commendation. He’s encountered foreign leaders and ambassadors, too, but it’s not quite the same—they didn’t leave their footprints in moondust.

He feels compelled to share what he’s learned with the coming generations. He has created numerous courses and video classes. He’s a lecturer and mentor to Boeing colleagues, a teacher to grade- and middle-school students.

And yet, Imtiaz is still learning. He remains fascinated by the Big Bang Theory, ever curious of how the universe was created. He reads everything he can about the subject. He studies the work done by others. He is encouraged that bigger and better telescopes coming on line may someday lead to an answer.

He is not done with watching people walk on the Moon, either. He wants to see it happen again. This particular achievement lured him into the aerospace world and eventually to Boeing and human space travel. He can’t think of a better way to finish his career than to revisit the Moon, which would help promote travel to Mars.

“The final chapter in my life would be to continue with NASA’s vision of building a Space Station in a lunar neighborhood,” Imtiaz said. “We could use an Earth and Moon Lagrangian point (neutral gravity) and go down and build a basecamp on the Moon. That would be full circle. That would wrap things up. What a journey this has been.”