Under and across the oceans 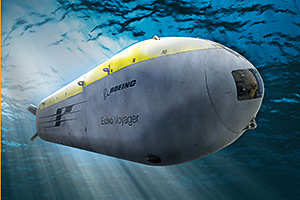 The next generation of unmanned undersea vehicles is autonomous, extra-large and long-range

Yet Boeing’s extra-large unmanned undersea vehicle (XLUUV) has a mast instead of a spout, a propeller for a tail. It doesn’t breathe.

That, in itself, is the advantage of introducing Echo Voyager to a world becoming more and more autonomous, said Lance Towers, director of Sea & Land for Boeing’s Phantom Works division.

The mini-submarine was designed to “offload the dull, dangerous and dirty missions where you don’t want humans involved,” Towers explained.

Echo Voyager, which rolled out early last year and is headed for ocean testing off the California coast, is expected to be able to spend up to six months at sea. It was designed to travel 7,500 nautical miles (13,800 kilometers) on lithium- ion batteries and a full tank of diesel fuel.

In other words, Voyager could go unimpeded from San Francisco to as far as Hong Kong—all without a surface support ship, relying instead on a lone operator stationed several time zones away.

Echo Voyager is the newest and most versatile member of Boeing’s UUV trilogy. It is the extra-large version and builds on the experience and capability offered previously by smaller Echo platforms. Echo Ranger, which is 18 feet (5.4 meters) long, was first unveiled in 2001 and now performs ocean surveys and payload experimentation. Echo Seeker, which is 32 feet (9.7 meters) long, has been in service since 2015.

Boeing has designed and operated manned and unmanned deep sea systems since the 1960s.

It is expected that some day unmanned vessels will provide an undersea security force that patrols the largest American harbors and waterways, plus demonstrate the ability to perform surveillance missions in potentially hostile waters, according to Boeing leaders.

Echo Voyager could be used to inspect infrastructure below the surface, create ocean-floor mapping and detect environmental hazards in open waters, program engineers say. It can launch and be recovered from virtually any port, again negating the need for a support ship. Navies, salvage crews, researchers and fossil fuel companies are logical entities that would use the XLUUV at a fraction of what a full-scale manned submarine would cost.

“We were interested in trying to help our customers break the cost curve,” Towers said at a demonstration in Arlington, Virginia.

The vehicle uses encrypted Inmarsat IV, Iridium, Wi-Fi, and/or freewave-enabled communications on the surface, and acoustic communications for command, control and status messages during submerged operations.

To insure its seafaring independence, the vehicle comes equipped with redundancy and backup systems, necessary to withstand the rigors of the highly pressurized underwater world.

What separates Echo Voyager from other unmanned vessels is a hybrid rechargeable power system. Once its batteries run low, the submarine will surface, raise its mast and turn on diesel-powered generators to charge the batteries. Once recharged, it will submerge, lower its mast and be on its way.

There is much to be done under the ocean’s surface.

“Oceans offer a look into our past and our future,” said Steve Deinstadt, who works for Boeing in Huntington Beach, California, and was a senior field engineer for Boeing’s Echo Seeker. “Let’s seek it out.”

Boeing has taken another step toward growing its position in the autonomous systems marketplace by acquiring Liquid Robotics.

Liquid Robotics is a market leader in autonomous maritime systems and is the developer of the Wave Glider autonomous ocean surface robot.

In September 2014, Boeing and Liquid Robotics entered into a teaming agreement that resulted in extensive integration on the Sensor Hosting Autonomous Remote Craft (SHARC), a version of the Wave Glider. The SHARC, integrated with Boeing’s advanced sensors, connects intelligence, surveillance and reconnaissance capabilities ranging from satellites to manned and unmanned aircraft to subsurface vehicles.

Liquid Robotics has designed and manufactured the Wave Glider, the first wave- and solar-powered autonomous ocean robot, since its founding in 2007. With more than 1 million nautical miles (1,852,000 kilometers) traveled, the craft’s capabilities address the challenges facing defense, commercial and science customers by making ocean data collection and communication easier, safer and immediate.