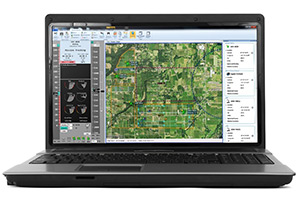 The U.S. Federal Aviation Administration last August released its Part 107 rules governing small unmanned aircraft operations. The rules, which went into effect Aug. 29, will allow an estimated 600,000 UAVs to take to the sky in 2017.

Because pilots of commercial off-the-shelf UAVs spend the majority of their time physically controlling the aircraft and payload instead of focusing on the mission, we saw the opportunity to translate Insitu’s expertise in command and control into a commercial product that can provide a professional, safe and effective way to control unmanned systems being used for a variety of missions—from aiding first responders to monitoring utility poles.

Operators can control UAV platforms and payloads with a simple drag-and-drop interface combined with a familiar set of aviation gauges and air tapes. The system can integrate and visualize data such as weather information and airspace data—as well as terrain data and satellite imagery for better situational awareness while flying. It also includes a mission planning function with a built-in simulator to create payload and platform actions around waypoints, set operational limits and identify no-fly zones for safe flights.

“Commercial UAV technologies are skyrocketing and will continue to do so—not just because they’re cool, but because of the data and information they provide,” said Kory Mathews, vice president of Boeing’s autonomous systems organization.

The use of augmented and mixed reality technologies with INEXA Control provides new ways to visualize and interact with data to make better decisions.

“Success in the commercial marketplace will depend on safe and secure integration of unmanned systems into airspace, as well as the ability to capture real-time, high-quality, actionable data for customers,” Mathews said.

In addition to targeting commercial users, Insitu is also working with colleges and universities to bring this technology to aviation and aerospace students. Last May, the University of Nevada, Reno, College of Engineering chose the software as a tool for teaching command and control in its newly established UAS Flight Coordinator course. Embry-Riddle Aeronautical University and San Diego Christian College have both since added INEXA Control to their classrooms.