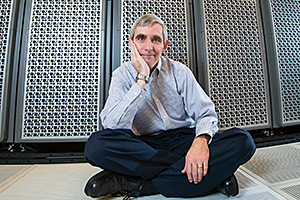 One might have easily been lost within a labyrinth of server racks, but Technical Fellow Ian Willson relishes building data infrastructure for Boeing. Photograph by Marian Lockhart

Immersed in a world of math and computation, the intrigue of artificial intelligence sparked an ongoing pursuit of better data analysis.

Ian Willson was a weary business traveler—well before leaving his house.

More than two decades ago, the then-data analytics software consultant typically couldn’t find time to book his flights until Sunday night, after-hours for the airline reservationists and travel agents who might have helped him.

He scrambled to find the cheapest rates and best routes, printing out multiple computer screens of information from complex reservation systems to compare options. He spent far more time on this than he should have.

So, Willson created a solution.

He introduced Air Travel Manager in 1993, a consumer-friendly interface on top of an intelligent agent that removed all of the complicated command sequences of the airline reservation system. It made sense of all of the cryptic information. It turned into a thriving business.

Today, he makes things happen for Boeing in a similar fashion. Willson tackles complex data situations and not only provides solutions that have companywide implications, he delivers methods that influence industry standards.

“I’m the person to go to when normal stuff doesn’t work,” he said.

Mehdi Ghods, Boeing Technical Fellow and senior mathematician, was at a data analytics conference in San Diego, speaking with an executive from another company about industry developments, when their conversation took a surprising turn.

“He says, ‘There is a person at Boeing called Ian Willson who is incredibly unique,’” Ghods said. “That is so important to us.”

In 1999, Willson was hired by Boeing to help design a Teradata system that would serve as an active data warehouse and an operational data store. Teradata remains a long-term provider of data software and platforms, and Willson was highly skilled in its use. Boeing needed someone to customize, or manipulate, software to deal with the rapidly increasing amounts of information generated by its products. Willson was that person.

After installing Boeing’s first active data warehouse, Willson was tasked with integrating 50 internal and external systems into a single data platform. This involves all aspects of Boeing’s data from new and existing airplane programs, from conception through delivery and support. This data analytics clearinghouse is centered on a Massively Parallel Processing database, or MPP.

“He has deep expertise in a very complex area of computer science, analytics and mathematics, all critical skills,” Ghods said.

This active data warehouse—for the 787—evolved far beyond the original request. The Dreamliner program simply needed a way to run reports. But Willson took it several steps further, providing airplane web-based engineering and manufacturing information to thousands of customers worldwide. He also enabled time-based analytics to be run on the 787 factory floor. It was such a breakthrough in cost and efficiency that Willson received one of Boeing’s 2013 Special Invention Awards. His work was also awarded two patents and helped set the industry standard in 2011 for time-based analytics in a relational database.

Willson further extended his time-based invention to the Internet of Things and has a patent pending for making interactive time-based analytics available for airline sensor data at a fleet level. Among a myriad uses is to use predictive analytics to prevent breakdowns. Willson came up with a time-based analytics system used to measure trillions of rows of fleet-level sensor data that is 3,453 times faster than Boeing’s previous version.

“The broader question—to use your data in intelligent, thoughtful ways—is what I specialize in,” Willson said.

Willson initially was pulled to the field by what is now an antiquated way of generating, storing and processing numbers and words. He was an air-traffic controller in training in Toronto when he became more interested in the computer resources surrounding him. The data retrieval process was primitive, involving cassette tapes and readout strips of paper punched full of holes.

I was really captivated by all of the technology they had,” Willson said.

He would leave the tower to study computer science and earn a doctorate in the relatively new field of artificial intelligence and predictive analytics at the University of Toronto. And then he taught what he learned. He wrote his dissertation on a form of approximate math logic, known as fuzzy sets, which can provide answers based on incomplete information in situations (such as focusing a camera lens) where conventional methods fail.

Willson left the classroom to branch out and become an entrepreneur. He settled on the Seattle area to be near an influential technology community that might assist in his creative development or share in a possible business venture.

He operated Air Travel Manager from his home, using seven phone lines. He enlisted virtual employees to answer calls and mail out brochures. He used an algorithm to determine airline seat pricing and create the first self-booking practice for non-computer-savvy consumers—charging them a onetime $59 fee to operate the software, yet rebating them half of the airline booking commission. Best of all, he no longer had to fuss over his own travel.

AirTM was hailed as a pioneering development by USA Today. In a 1994 story bannered across the top of its front page, the newspaper declared that “booking airline tickets on your computer just got easier and cheaper.” A year later, Forbes magazine weighed in on the emergence and relative simplicity of the online service, stating: “High commissions give way to a software-smartened appliance as ubiquitous as a toaster.”

Willson’s consumer business thrived until airlines responded by eliminating all commissions for online bookings. In its wake, he was sought out to create software for the National Business Aviation Association. Travel$ense founder David Almy pursued Willson after personally using AirTM and reading glowing reviews about it. He urged Willson to develop software for his company.

Travel$ense provided business travel analytics (including real-time creation of a comparable airline trip) over the next decade, reaching more than 1,000 companies in 19 countries, until that technology changed. Users were informed whether private or commercial air travel was cheaper in different instances, taking many customizable factors into consideration.

Almy was so impressed that years later he recommended Willson for the Boeing Technical Fellowship.

“Willson’s accomplishments creating two pioneering software programs have been widely recognized in the software industry,” Almy wrote on his behalf. “Rarely is the first of a new breed of software successful … but Ian has achieved this distinction twice.”

Logic dictates that Willson now should be president and chief executive officer for some well-heeled, travel-minded company. Yet in spite of his personal business successes, the entrepreneurial Canadian American determined he needed to be more of an in-house problem-solver at a broader scale than online travel booking.

“The further intellectual challenges of air travel booking weren’t there at the time,” Willson said of his business ventures. “Computing capabilities had since solved many of the hard problems.”

At Boeing, Willson intends to create something that can answer all types of complex questions as easily as it does basic inquiries. This requires the inclusion of Hadoop, computer software that specializes in the storage management and processing of varied data and the integration of advanced algorithms such as machine learning.

He envisioned and is deploying for Boeing a special-purpose hybrid data analytics platform fully parallelized across multiple types of massively parallel systems. For instance, ask a question, and up to 600 tasks will respond at once within the database cluster. This is done while interacting in parallel with Hadoop using hundreds of processes to execute advanced algorithms. All of it working transparently to the end user and at interactive speeds on near-real-time data.

In the case of airplane sensor data, data comes off an airplane and is sent to Boeing, which initially stores it in Hadoop. Willson has invented a format for both Hadoop and Teradata that requires a lot less space to house these overarching quantities of information. The format maintains the accuracy of the data in an unfailing manner and drives analytics to respond faster.

He has invented a range of time-based analytics methods that helps determine how broad-based data analytics should best be applied. He recognizes that analytics innovation needs to be shared and used as an industry standard to be properly accepted. He is determined to get rid of the old, pre-conceived limitations of how data should be leveraged and analyzed.

“I want people’s mobile device or web browser view to be everything they need,” Willson said.

Willson moves in select analytics company. He meets privately with 14 other deep-thinkers who represent major companies in similar capacities. They brainstorm for two weeks each year at an information summit, sharing ideas in how to move their industry forward.

Willson’s ability to compress data in an efficient manner has changed the way the company does business in this arena, said Michel Claessens, an analytics specialist in Boeing Commercial Airplanes. Willson, having once been an entrepreneur, also is suited to sell his methods to business people.

When he first joined the company, Willson said there was no call to create a company-wide data analytics engine. He handles that responsibility now, with data evolving to the point that it’s now a foregone conclusion.

Willson, in a sense, has become Boeing’s air traffic controller regarding data. He directs it to the proper runway and makes sure it lands on time.

“Being a plane guy, there are so many great problems you can solve here and so many more to come,” he said.