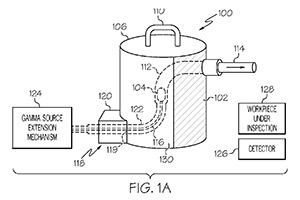 A schematic diagram of an example of a gamma source inspection system, including a visual indicator showing that the gamma source is stored and not exposed in accordance with an embodiment of the present disclosure. A patent granted to Boeing makes X-rays and gamma rays plainly visible through the use of quantum dots. This technology could provide an instantaneous visual indication that an X-ray source or gamma source is exposed or unshielded.

X-rays or gamma rays from a radioactive source or gamma radiation source have valuable uses in industry and medicine. However, exposure to X-rays or gamma rays, or prolonged or repeated exposure at even low intensity, may be harmful. X-rays are invisible to the human eye, so users of this equipment wear sensors or monitors to indicate that X-rays are on, or they wear film badges to show radiation exposure.

There might be circumstances, however, that warning devices may be inoperable for whatever reason. And film badges only identify exposure after the fact. So, there is a need for a mechanism that provides an instantaneous visual indication that an X-ray source or gamma source is exposed or unshielded—a method that is not subject to the disadvantages of electrical devices or the need for other mechanisms (like a switch).

This patent granted to Boeing in November 2016 makes X-rays and gamma rays plainly visible through the use of quantum dots. The quantum dots would be exposed onto a surface of the material used to operate or activate the X-ray or gamma ray exposure, or shield the radiation. The quantum dots fluoresce in response to being exposed to X-rays or gamma rays, providing an immediate color change on the exposed structure that will be a visible warning to anyone in the area.

Automating data-processing tasks can be an effective way to achieve efficient and accurate data analysis results. But when you’re using multiple computing devices that have incompatible operating systems or applications, you might have to manually transfer files, run analysis programs or format data, which is less efficient and may introduce errors into the data analysis process. This issue has not been fully solved by currently available systems.

Various aircraft, including both civilian aircraft and military aircraft, share the navigable airspace. To avoid mid-air collisions, a portion of the navigable airspace, typically referred to as “controlled airspace,” is controlled by ground-based air traffic control. Air traffic control communicates with aircraft pilots to effect an orderly flow of air traffic and to avoid both mid-air and on-the-ground collisions. Outside of controlled airspace, aircraft pilots avoid collisions by relying on their sight and sophisticated sense-and-avoid equipment, such as a traffic collision avoidance system and an automatic dependent surveillance-broadcast.

This patent granted to Boeing in November 2016 describes systems and methods for providing safe flight of aircraft in navigable airspace. One part of the deconfliction system may include a registration system having an airspace database and an aircraft assigned to a registered airspace where the aircraft would have a guidance computer and an override unit. When the aircraft breaches the registered airspace, the override unit would take over.

Modern aircraft typically include a networked system to allow the systems of the aircraft to communicate, provide services to the passengers, and communicate with off-board systems. The network, however, provides a conduit by which malicious entities (e.g., hackers) can attempt to gain unauthorized access to the aircraft. To prevent this, modern aircraft employ various security controls to prevent access to critical and sensitive systems.

The security controls, however, are not the complete answer. The disclosed systems and methods provide an effective and real-time means for detecting, analyzing and tracking attempted breaches. Conventional ground-based systems often include dedicated systems to detect and track breaches. The conventional ground-based systems that do this are designed to work on large scale networks and are not suitable for aircraft because of size and computational requirements.

System and method for developing a cyber-attack scenario

Because the amount of digital information in operating and maintaining aircraft is increasing, the importance of protecting aircraft systems from cyber attacks is also increasing.