Seeing beyond the horizon 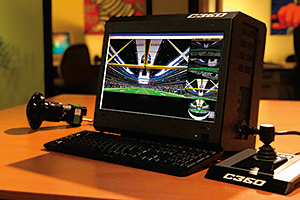 By investigating and investing in promising technologies, Boeing looks to disrupt the industry, and itself.

Men outfitted in jetpacks soar above the desert in the United Arab Emirates. In this popular YouTube video, they circle Dubai’s tallest buildings and even fly in formation alongside the wings of a low-altitude jetliner approaching the city, providing matching contrails.

Daring examples like this demonstrate the next wave of aerospace technology advancing across the global landscape. It includes autonomous air vehicles, augmented reality and electric propulsion&msash;a wave of bold ideas pointing to remarkable change.

Peter Kunz, chief technologist for Boeing HorizonX, likens this moment to one 50 years ago, where advancements in software and computer science brought a new world order to technology, spurring business development, investment and ultimately an industrial revolution.

“You’re seeing a penetration and acceptance of technology from a much broader segment of society than you saw in the past,” Kunz said. “There’s an excitement that new things are coming.”

“This team strengthens our ability to innovate, compete and win, and change the world,” said Greg Hyslop, Boeing chief technology officer. “Our Boeing HorizonX colleagues augment our own ability to innovate by looking for emerging business models or strategies that can disrupt aerospace, as well as for partners or markets that can open new opportunities for Boeing.”

HorizonX operates under the guise of creating technological disruption rather than being disrupted by it. This requires a new way of thinking about innovation, which this new organization has fully embraced, explained Logan Jones, senior director within the group.

“People often miss the disruption because they define things in ways that experience has taught them,” Jones said. “It might be a perfect way to look at the past, but it is not a predictor of the future. We’ve been very broad. We’ve been purposefully nebulous in how we define focus areas. We want to open the aperture.”

“Part of this group’s purview and vision is to look at all of the supporting elements&msash;aerospace in general,” Kunz said. “We’re one of the few tech industries tied to an end product as opposed to specific technology.”

Digital advances seem to be driving this latest era of innovation, which could transform air travel and space exploration, if not transform the overall quality of life and human interaction. This potential is attracting funders. Since 2000, new investors have put $13 billion into space startups, according to The Tauri Group, an industrial consulting firm. By all signs, other areas of aviation stand to benefit next from forward-thinking financial support.

“We see the big explosion from the investment in space startups,” said Ben Iannotta, editor-in-chief for Aerospace America, the magazine of the American Institute of Aeronautics and Astronautics. But “when we look at aviation and see all the great challenges&msash;of getting people into less-developed countries, traveling on aircraft, tracking aircraft, improving safety by beaming cockpit audio and video to the ground&msash;are we on the cusp of seeing a similar trend?” 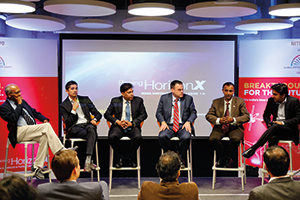 Here are some examples of how Boeing HorizonX is helping to upend traditional aerospace models:

As autonomy continues to evolve and becomes mainstream, Boeing is identifying, funding and developing unmanned technologies with the potential to provide aerospace innovation. Examples of Boeing HorizonX Ventures investments include:

Boeing has invested in Gamma Alloys, a company in Valencia, California, that pursues breakthroughs in nano-reinforced aluminum alloys for greater strength and improved wear resistance across a wider range of temperatures. Boeing spotted an opportunity in Gamma Alloys to further reduce the weight of its products. Upskill, another startup receiving investment, makes software for augmented reality eyewear. The products by the Washington, D.C., company can enhance productivity, quality and safety in manufacturing, field service and logistics.

Moving forward, HorizonX will continue to host openpitch competitions that encourage smaller companies to present innovative ideas and pursue venture capital investment from Boeing. These events enable Boeing to forge commercial agreements with startups and offer them visibility with a wide variety of business lines and customers, as well as establish connections with Boeing’s vast network.

The Boeing HorizonX India Innovation Challenge 1.0, launched in November 2017, is aimed at energizing aerospace innovation in India’s startup ecosystem. Finalists will receive funding to participate in a three-month accelerator program at T-Hub, one of the largest startup ecosystem builders in India.

Zunum Aero, another Boeing HorizonX Ventures portfolio company, is developing alternative propulsion systems with the potential for performance and efficiency improvements in a range of aerospace applications. Based in Kirkland, Washington, Zunum Aero is studying where hybrid and fully electric propulsion technologies can influence the market, primarily in smaller regional aircraft segments below Boeing’s current product line.