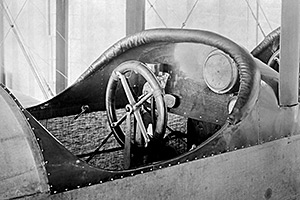 That the pilot’s vision is critical for efficient and safe operation of an airplane appears to be obvious. However, one might not understand how exceptionally challenging it is to provide optimal visibility because of the tradeoffs between pilot vision capability; visual human factors; lighting technology; weight, power and cost constraints; the extreme ambient lighting environments ranging from the darkness of night to bright sunlight; and the dynamic nature of flying (moving in and out of clouds, for example).

Traditional flight deck equipment used media that can be viewed by ambient light with internal lighting provided to enhance visibility, particularly when the ambient light level is low. Electromechanical-type instruments have been on Boeing flight decks since 1916 and are still in aircraft in 2018. New solid-state electronic controls and displays have replaced the older mechanical-type instruments and offer many advantages by reducing crew workload, improving flight operations and safety, reducing cost, and providing greater flexibility. This innovation has been made possible by innovation in lighting and display technology.

The past 30 years have been exciting, challenging, productive, and enjoyable for lighting and display engineers. They have worked the transition from over 70 years of incandescent-based lighting and gauges to solid-state LED (light emitting diode) lighting and liquid crystal-based, graphical, electronic, flat-panel displays.

Avionics technologies, requirements, design and analyses methods, test equipment, and methods have never been better. All of this yields a winwin situation for both Boeing and the customer by enhancing work effectiveness, aesthetics and crew comfort, making an efficient and truly integrated design possible.

The full version of this paper (available online) provides an overview of the significant past, present and future lighting and display technologies and design approaches along with their impact to business and crew operations. The primary flight instrument progress takes center stage, telling the flight deck design story. Boeing commercial flight deck design is the paper’s focus, with some mentions of military, exterior, interior lighting and display optical designs. The evolution of flight deck design, from the B&W to the 787, is full of accomplishments and challenges as evidenced by the following historical milestones.

Even the earliest Boeing airplanes had pilot controls and indications. The first Boeing airplane, the B&W 1916 cockpit is shown in Figure 1 with round dials. These mechanical instruments had painted white lettering on black background, which were readable in the daytime when the sun was shining due to the reflectivity difference.

As night flying became more prevalent and available, man-made lighting was increasingly needed for the cockpit instruments. In 1925, the first landing lights were installed on a mail plane and powered by a charged car battery. At the same time, greater and greater demand for airfield lighting was driven by the pilots having to perform these difficult tasks. The early years of airplane lighting were based on the incandescent lamp as a light source shining on painted white-on-black, electromechanical instruments. A cover glass was placed over the dial gauge to protect the pointer movements. The cover glass needed anti-reflection coating to minimize reflections from the air-toglass interface. Early lighting needs were covered by floodlights, post lights and flashlights.

In the late 1930s, Boeing began selecting more effective, but awkward, indicator lights for system status that were being used by the telephone company. The move into the turbo jet era was significant for many reasons, but displays and instruments remained relatively unchanged.

After the 707 and DC-8, the turbo jet transport continued to evolve with larger numbers and varieties of lighting leading to designs such as the 1969 747 flight deck that consisted of a “thousand” lights, gauges and switches.

Quest for Electronic and Flat-Panel Displays

The reflective needle-and-dial mechanical gauges of most early aircraft needed repeated maintenance to keep their intricate clockwork mechanisms operating properly. Yet for all their mechanical complexity, they were still reliant on ambient, aimed or integral back light in order for the pilot to see them. These devices ultimately made use of incandescent lamps shining on or integrally backlighting them for readability at night and in dark ambient lighting conditions. This was a huge step forward for flying in all ambient lighting environments; however, incandescent lamps do not last long because the heated metal filament will degrade over time and usage. These lamps can also generate a surprising amount of heat. For these reasons, both Boeing and customers were always interested in some way to improve performance.

To address these design issues, lighting and display engineers continuously investigated and drove the state-of-the-art technology of the day, always looking for more reliable light sources and instruments. A major step forward for the industry came about in the form of new display types that could provide all the information previously presented via gauges and number readouts. According to industry display expert Larry Tannas, “Boeing was a driving force as a customer for electronic and flat-panel display technology.”

“Electronic” means there are no moving mechanical parts to the device. Panel displays were gaining in prominence in consumer goods at the time, but this was not a case where a new technology could be directly applied as is. Tannas pointed out, “The most taxing application for an electronic display is the aircraft cockpit.” The vibration, thermal, space and weight demands placed on these devices even in a flight deck environment are extreme. The benefits to their deployment, however, meant that Boeing had to pursue them.

Boeing display and human factors experts Lou Silverstein and Robin Merrifield were instrumental in defining the display optical characteristics needed for the 757 and 767 flight deck during this time. This was a bold step for Boeing, as these would be the first color CRTs ever used for flight instruments in any type of aircraft, military or commercial.

Although the general trend was for avionics and flight deck technology to trickle down from military programs to commercial flight decks, Boeing decided to jump ahead of the military programs and associated governmentfunded research and development to develop the Boeing Electronic Flight Instrument System using color CRTs.

All of this effort led to the introduction of the Boeing 757 and 767 in the 1980s with two-crew glass cockpits for airline service. The term “glass cockpit” came about from this development due to this increasing use of cathode ray tube displays for most of the primary instruments in lieu of the old-fashioned steam gauge electromechanical instruments used on other airliners. The concept caught on beyond Boeing circles, with McDonnell Douglas later introducing similar approaches with the use of CRTs on the MD-90.

Boeing continued this evolution in electronic displays on Boeing airplanes like the 747-400. Depicted in Figure 9 are two versions of the 747, the original model with a “thousand” lights, gauges and switches, and the upgraded 747- 400. These electronic displays enabled the integration of data into information that is far more readily understood and interpreted by the flight crew.

Around 1985, with the rapid pace of display technology progress that was occurring in consumer circles, Boeing selected AMLCDs (active-matrix liquid crystal displays) as the technology to replace CRTs for the next airplane, the 777. The 777 was the first airplane to use AMLCDs as primary flight instruments.

Tannas’s thesis is that the AMLCD is the only flight deck display that can do all the things ever wanted in the flight deck because it has two new performance features:

No other display technology to date has this capability without loss of some other performance parameter, such as loss in resolution as exhibited in CRTs. The AMLCD can be made as bright or dim as the backlight can be made to perform. A 4,000-to-1 dimming range is available.

Using LED solid-state lighting for high-intensity landing lights has long been a vision for commercial aircraft and represents a major shift in lighting technology since the first incandescent lights were implemented approximately 90 years ago. Airlines currently replace halogen landing lights approximately every 100 hours or roughly every two weeks.

In 2015, for the first time, LED landing, taxi, and runway turnoff lights were certified and delivered on large transport aircraft, bringing tremendous benefit to customers due to long life and high reliability compared to current incandescent lamps. The introduction of these lights paves the way for other models to replicate the application, bringing benefits across the entire Boeing fleet. Because of the high intensity required, and the time it took for LED efficiency to improve, landing lights were the last lighting design area on the airplane to go LED. The new LED landing lights are a tremendous improvement in maintenance frequency and total labor hours for our airline customers.

The current visual human factors and metrics are not perfect representations of the human visual system and performance. Because of this, lighting and display optics designs usually need to be visually evaluated with observers. Scientific progress continues to better understand and model our eye-brain system for colors, color rendering, brightness, glare, gloss, visibility and alertness.

As an example, at the August 2017 IES (Illuminating Engineering Society) annual conference, a 2020 goal was established to improve the photopic response V(λ) because it is based only on the center foveal 2 degrees of our vision and excludes peripheral vision that is known to affect vision and health. V(λ) was first adopted in 1924 and is the basis for intensity, luminance and illuminance metrics. It is expected that it will take three to six more generations to achieve complete understanding and to develop the associated metrics. This will allow innovative products to be created to better match human needs with improved requirements. For example:

The future will see continued and more extensive use of lighting modeling using computers. Modeling is used to visualize and communicate the lighting design. It is used to conduct engineering design and analyses before building mockups, prototypes and hardware. Optical modeling and photometric analyses is the study of electromagnetic radiation, and its interaction (reflection, refraction, diffraction) with objects, and ultimately its perception by the human eye, camera or sensor. Aircraft have numerous design aspects that rely on predicting the behavior of light.

The far future for the flight deck may be that there are no pilots on the plane. Then, there would be no need for flight deck lighting and displays on these unmanned vehicles except to make them visible and for repair and maintenance. 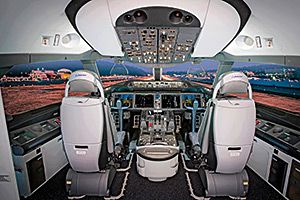 The visual interface is the most important pilot and airplane interface. Execution of flight crew visual performance tasks and procedures are measured in terms of accuracy, speed and comfort. Visual performance factors include:

THE ABC’S OF LIGHTING

The 787 flight deck (see above) lighting design advancement provides significant benefits for the airline customer and pilot’s “office in the sky” because it: