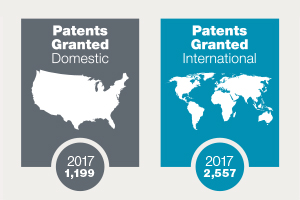 2017 Boeing patents
With a healthy patent portfolio in the United States and internationally, Boeing has continually been acknowledged as an innovation leader by multiple third-party analysts.

Check out a few of Boeing’s latest ideas and technical breakthroughs recently granted by the U.S. Patent and Trademark Office.

The cost of fighting wildfires in the United States topped $2 billion in 2017, according to the U.S. Forest Service. The instances of wildfires, and their subsequent devastation, have increased in many countries around the world over the last decade.

Early fire detection and monitoring has improved recently through the use of a combination of satellite data and unmanned aerial systems. However, the average time to deploy necessary fire suppression assets, often still including human firefighters, is too long, allowing the fire to escape out of control in a significant number of cases.

This patent, granted to Boeing in December 2017, describes a system using a cargo unmanned aerial vehicle, with a controller and monitoring system, to more quickly and easily deploy a fire retardant or a fire suppressant at a location of a detected fire event or risk. One or more UAVs carrying a payload of fire suppressant would be instructed to deploy at the risk location in an attempt to control a fire event or risk in a shorter time period than is required to deploy more conventional, manned assets.

Radar devices transmit signals, such as electromagnetic or sonar signals, that reflect off targets and are received by the radar device to provide the position of the target. Some radar devices typically rotate the antenna through 360 degrees to pulse signals and detect targets within the area swept by the antenna. The technology of multi-beam frequency-modulated continuous wave (FMCW), however, offers some promise of lower cost, and more accuracy.

FMCW radar has multiple advantages compared to pulsed radars, including at least: a much lower peak power than pulsed radars; reduced receive digital bandwidth requirement; higher range resolutions; and design freedom to separate transmit and receive antennas. Likewise multi-beam digital beamforming has advantages compared to pulsed radar, including searching the entire field of regard in each sweep, and greatly improving tracking capability for multi-beam systems.

This patent, granted in November 2017, describes a multi-beam FMCW radar system and method designed for short range (<20 km) operation in a high-density threat environment against highly maneuverable threats. The multi-beam FMCW system is capable of providing continuous updates, both search and track, for an entire hemisphere against short-range targets.

Regardless of material or method, articles formed by additive manufacturing may require surface processing to provide a more desirable product. To improve the surface finish of a part fabricated with additive manufacturing equipment, separate post-processing steps must be undertaken at processing location using conventional surface-finishing equipment and techniques. However, post-processing of surfaces could be cumbersome, expensive and time-consuming. In addition, conventional post-processing methods may be ineffective for reducing the surface roughness of the interior surfaces of some complex parts, resulting in products with less than desirable properties.

Window method and apparatus for protection from bright light sources

High-intensity light sources, such as laser and other photonic weapons, can jeopardize crew members’ vision as they operate vehicles.

This patent, granted in December 2017, describes a system that provides active protection from these threats with a switchable mirror, minimizing disruption of aircrew line-of-sight by enforcing small mirrored spots on the canopy transparency to shade the aircrew’s corneas from direct exposure.

More specifically, the patent describes an electrically switchable mirror, installed in a window or canopy, that protects crew members from a dazzling or blinding light source of arbitrary wavelength by switching successive layers made of cholesteric liquid crystals from a transmissive state to a reflective state. In addition, when a power failure occurs, the window becomes semi-transparent, providing some protection while still permitting the crew members to see through the window.