In for a rough ride 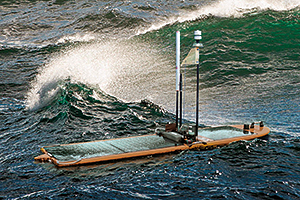 Testing the Wave Glider in the North Atlantic.

Call it an ocean robot.

This ocean robot runs 100 percent on renewable energies— wave and solar power. Without the need for refueling, the Wave Glider is able to stay at sea for many months at a time collecting and transmitting data from across the globe and from the seafloor to space.

The Wave Glider has a unique two-part system with a float on the surface of the ocean connected to a “sub” or wing rack 8 meters (26 feet) below via an umbilical. This two-part system converts the up and down motion of the waves into forward propulsion. No fuel required, no engine noise or emissions produced.

Onboard communications, computing and sensor payloads are powered by solar energy. Through underwater acoustic communications it acts as a communications router for subsea sensors and vehicles relaying data in real time from the seabed to space. Fleets of Wave Gliders can operate autonomously or more directly through remote piloting depending on mission requirements.

With over 1.4 million miles at sea—which roughly equates to 65 times around the Earth—and a Guinness World Record for the “longest journey by an unmanned autonomous surface vehicle on the planet,” Wave Gliders have covered a lot of the world’s ocean. From listening for submarines or illegal fishing vessels, or helping scientists better understand the weather and the environment, the Wave Glider is recognized as the industry’s most proven unmanned surface vehicle.

Wave Gliders have covered a lot of the world’s ocean, but even with this extensive experience, customers are asking for more capabilities. Their missions require persistent operations in the most northern and southern high latitudes in the early winter months. During this time, the conditions, as measured against the WMO (World Meteorological Organization), reach sea states 7, 8, and even 9. These seas have significant wave heights exceeding 14 meters (46 feet) and in some cases, with random or rogue waves being encountered, this wave height can be doubled. For perspective, 14 meters is equal to the average height of a four-story building. These are conditions so severe that no sailor would willingly enter.

With this as backdrop, my mechanical engineering team was empowered to take on the task of designing the next generation Wave Glider that could operate reliably in these high sea states. We had the mantle to go big or go home. We weren’t going home.

Think of the challenge to design an ocean robot that must autonomously collect data from the deep ocean, stay at sea for many months and communicate in real time from the seabed to space. Add operating in corrosive salt water to this, and do all of it safely and sustainably with no harm to the ocean. Raise the bar even further to achieve this in extreme sea states (WMO 6+) for missions in the highest latitudes on the planet (Arctic and Antarctica).

This engineering task was monumental. One of our biggest issues was a void of existing data on the actual mechanical loads. Our goal was to enhance our core Wave Glider platform for extreme conditions and for environmental loads that were unknown. We needed to design for an environment that’s so inhospitable there is no data characterizing the operating conditions. We had to think of the worst corner case and double it. My team had to consider the most remote possibilities and design for it.

As we began the planning for our initial prototype testing, we enlisted the help of Eric Terrill, director of Coastal Observing Research and Development Center Research at the Scripps Institution of Oceanography, an expert in extreme sea states. Together, the Liquid Robotics engineering and mission operations teams joined Terrill to test our prototypes offshore of Iceland. As noted, in the winter, the ocean conditions are incredible—producing continuous sea states of 8 and 9.

In our early testing, we learned what it truly means to be at the mercy of the ocean. The extreme force and continuous pounding waves resulted in bent wing spines and tubes (part of the sub). These problems were easier to fix. It was a straightforward mechanical engineering task to strengthen key structural components of the sub; however, other elements were much more difficult.

One of the most difficult problems to solve was to achieve the proper glide dynamics of the sub. The sub, or “glider,” uses the forces caused by the float rising and falling with the waves to produce a thrust vector forward. With such chaotic and volatile sea states, waves can come in sets causing the sub to pitch to extreme angles due to differentials in wing lift. The sub would actually stall and once in this condition, the vehicle was very unstable and able to entangle with the umbilical. Tank testing, video capture, brainstorming, and lots of hard work to build prototypes quickly led to a design that would consistently glide properly.

Keep in mind, we’re trouble-shooting an entire system that includes mechanical, electrical and communications components, as well as onboard and towed sensor payloads. This combination makes for a sophisticated data and communications platform that needs to perform in significant wave heights reaching in excess of 10 meters (33 feet).

We collected a massive amount of data, including hours of video, which provided us with significant insight into the operational environment and the unique stresses it placed on the vehicles. (A video of the extreme sea state testing, “Wave Glider in High Sea States” can be found at liquid-robotics.com.)

From our prototype testing and with a lot of engineering elbow grease, the result was our next generation Wave Glider. The platform was fortified and strengthened to battle the pounding forces of seas in excess of WMO 6. To achieve this, we made the following engineering enhancements:

The reality is that no vessel is indestructible to the harsh and unpredictable ocean. This is especially true in high latitudes during the winter months. As Terrill told us, this is “ongoing evolution to tackle the planet’s most harsh oceanic environment.”

The next generation Wave Glider is being deployed in the defense and commercial markets. With this additional high-sea-state and high-latitude capability, Wave Gliders will help customers explore and secure regions of the ocean that have been off limits because of the danger, cost and risk of traditional surveillance and exploration. They will serve as a tool for navies to provide persistent maritime surveillance. As Terrill is demonstrating, they will help scientists observe the conditions of Antarctica.

Liquid Robotics is often described as a place where rocket science meets marine science. Whether airplane designers or electrical engineers, oceanographers or cloud computing software experts, the team comes together to design the best long duration ocean robot on the planet.

When you put this diverse group of thinkers together and empower them to create products that make a difference in the world, some interesting and challenging problems can be solved. Core to who we are is this freedom and commitment to thinking big and trying new designs without fear of failing.

Always learning from new deployments, Liquid Robotics continues to help our customers solve big problems. Our company culture gives us the freedom to try new things, learn and adapt quickly. This helps us to improve our product, push limits and deliver an autonomous system that has a chance to change the world