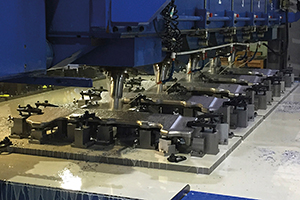 Titanium’s properties in strength versus density make it one of the most desired metals for aerospace applications. But the cost considerations have prevented its widespread use. Improvements to Ti processes and alloys that lower cost and make use of the metal more feasible could allow for game-changing innovation in aircraft design.

At the same time, the buy-to-fly ratio (the difference between the amount of material that is purchased and amount that is thrown away as scrap) for titanium parts is typically so high that around 70 percent of the metal in a semi-product goes to chips during machining. Recycling titanium scrap, therefore, warrants serious attention from titanium suppliers.

However, with the conventional method of ingot fabrication—vacuum arc remelting (VAR)—scrap reuse accounts for only around 30 percent of total ingot production because the cost to clean and sort the scrap would not be compensated by the savings on sponge beyond that level.

The Boeing–VSMPO Innovation Center— a Boeing partnership with VSMPO-AVISMA, the world’s largest titanium producer—was established in 2000. VSMPO supplies its products to the markets of 50 different countries and is deeply integrated into the world’s aerospace industry.

About 10 years ago, Vladislav Tetyukhin, then general director of VSMPO-AVISMA, and his research team, created a concept of a new lower cost alloy, VST2, aimed at replacement of Ti 6Al-4V, which could be produced with the use of scrap of various titanium alloys serially produced by VSMPO at the level of about 75 percent.

The key enablers for this concept were the technology of scull melting of ingots (available at VSMPO and characterized by much higher than VAR scrap refining ability) and development of the VST2 chemistry range, which is wide enough to accommodate the increased oxygen and the alloying elements getting into charge with scrap of various alloys and yet capable of providing for mechanical properties comparable with these of Ti 6Al-4V.

Also, an important factor to the advantage of using this concept at VSMPO was the opening of the joint venture Ural Boeing Manufacturing in 2009, a machining facility at the VSMPO site, supplying tons of chips of Ti 6Al-4V and Ti 5553. In 2010, Tetyukhin presented the concept of VST2 to Boeing. Soon, the research teams from Boeing and VSMPO started development of compositions that could be produced with high scrap utilization and hence reduced ingot cost.

Ti 6Al-4V Modified is production ready and approved for use in selected 787 parts made from plate as a lower-cost option along with Ti 6Al-4V.

While initially the goal of the development was to stay as close as possible to the Ti 6Al-4V chemistry and benefit only from saving on the sponge use in ingot, it soon became clear that it made more sense to take advantage of the wider chemistry range associated with using scrap of several alloys and turn it to the benefit of properties for specific applications. Thus, VST2L-B alloy (for superplastic formable sheet) and VST2F alloy (for fasteners) were developed by selecting the chemistries that provide for improved superplastic formability and manufacturability of fasteners compared to Ti 6Al-4V.

Superplastic forming (SPF) of Ti 6Al-4V sheet is a critical technology at Boeing and is used extensively. The cost of superplastic forming (SPF) dies is the major impediment to expanded applications, so the main solution is to lower the forming temperature. Reduction of the forming temperature was previously accomplished by reducing the grain size of Ti 6Al-4V. VST2L-B displaying superplastic formability at a lower temperature without being processed to fine grain represents an alternative solution with the cost reduction obtained due to both a cheaper sheet fabrication process and the saving on sponge in ingot fabrication.

Titanium fasteners are an important commodity to all of Boeing’s commercial programs. Ti 6Al-4V fasteners represent the vast majority of structural fasteners used on airframes, with annual usages in the millions.

The expansion of Ural Boeing Manufacturing—announced in 2016— will include a new facility based in the Titanium Valley special economic zone in the Sverdlovsk region. The facility, expected to open in 2018, will carry out a complete machining cycle (previously it was rough machining only), and represent an optimal logistics arrangement to take advantage of the VST2 alloy breakthrough for commercial product applications.