Ubiquitous Broadband Communications and the Development of Boeing Phased Arrays

By Julio A. Navarro

The start of Boeing’s second century puts us at the beginning of the next big leap in connectivity and presents us with the challenge to continue pushing active electronically scanning antenna (AESA) technology further.

As the commercial sector begins to drive this technology for 5G and IoT applications, many critical custom pieces will become commodities for use in integration. This is an opportunity for Boeing to leverage its broad packaging experience and use the resulting technologies for further development of affordable phased-array antennas (PAA).

In the near-future, reducing the size, weight and power may will reduce cost and make the dream of ubiquitous communication anywhere, everywhere, all of the time, finally a reality. Compared to a mechanical dish or flat-plate antenna, which must physically adjust to acquire a moving target, phased arrays are entirely electronic and have no moving parts. They allow simultaneous tracking of multiple targets, with higher reliability and a lower physical profile.

Phased-array antennas combine radiating media, transmission media plus analog and digital electronics all into a flat package. For the designer, the heterogeneous integration of an antenna, electronics and packaging makes the technology exciting and challenging. For the user, this high-level of integration has, in the past, increased the cost and complexity of the system.

For the most part, phased-arrays have served as the technology of the future—delivering high-end performance for those willing to pay for it. This trait has kept it in mostly niche applications where performance matters more than cost (such as military uses). Typical commercial applications, which are primarily driven by cost, struggle to justify the benefits that PAAs deliver to the end user. Boeing has made significant improvements to PAAs over the last four decades and has established a good base of intellectual property. Boeing’s innovations address cost and affordability and have brought the technology a step closer to the commercial sector.

Before the onset of microwave monolithic integrated circuits (MMIC), wide-scanning phased arrays were very large, bulky and relegated to lower frequencies or high-value radar systems. As MMIC technology advanced, the advantages of PAAs could be achieved for a broader set of applications. PAAs provide unmatched beam-scanning speed enabling mobile access, directional networking, multi-platform synchronization and advanced radar sensing. PAAs also mitigate critical platform challenges because they can be made thin with a low physical-profile, operated over wide bandwidths and include multiple simultaneous beams scanned in independent directions over a large field-of-view.

With some reasonable integration complexity, PAAs can also include low sidelobe levels and signal nulls in arbitrary directions. These qualities ensure low probabilities of signal interception and detection and minimize the effects from co-site interference or intentional external jamming. In general, any platform consisting of hundreds of antennas at various frequencies and with a broad range of coverage volumes and power levels can benefit from the use of PAAs with functions and capabilities beyond just ubiquitous communications.

Co-locating many transmitters can create a harsh, noisy and dangerous electro-magnetic environment that will not function effectively without significant levels of coordination in spectrum, time allocation and location assignments. For example, the prime real estate in most naval platforms is the center mast which enjoys an unobstructed view in all azimuth directions. Every system lobbies for this prime location that is typically reserved for a high-power multi-function radar sensor.

All of these functions are meticulously controlled and optimized to maintain platform protection and survivability in adverse environments. A modern multi-function, multi-octave high-power PAA enables the platform to quickly and better coordinate each of these functions, while delivering directional communications and avoiding co-site interference. However, such high-levels of integration adds cost and complexity the AESA system.

Most systems do not require the complexity nor the high-power levels of military-grade communications. In many instances, to reduce costs and complexity, communication PAAs trade high-element power levels for larger surface area to spread out active devices and reduce thermal management concerns. This simplification has helped Boeing make inroads into affordable phased-array technology.

As communications and wireless applications advance and mature, more opportunities to leverage AESA technology will arise. This trend will continue as society’s hunger for improved connectivity and streaming live content increases along with the military’s need for tracking larger numbers of targets at longer distances. The cost pressures placed on PAAs help drive solutions to lower power densities over larger apertures and push the needle away from the conventional high-power radars.

As phased arrays transition to the commercial sector, commercial practices will replace the typical military specifications, and the vast commercial manufacturing base will drive down the cost of the typical PAA. The standardization of key components and the use of open system architectures with interchangeable pieces will reduce costs. The opening of new markets, such as the automobile market, driverless cars, flying drones and the expansion of cellular services, will also help to make PAAs a commodity.

The continuous advancement of silicon in application specific integrated circuits (ASICs) and the advent of silicon-germanium (SiGe) for radio frequency integrated circuits (RFICs) has leveled the playing field in millimeter-wave packaging and AESA integration. The result is a much larger pool of contributors, including large and small companies working with academia.

Boeing has developed a wide range of PAAs to address both sensors and communications. Boeing has simplified and reduced the cost of phased-arrays and was the first to field them in the commercial aviation sector.

Boeing has specifically focused on the design of wide-angle, beam-scanning PAAs for mobile airborne SATCOM. The concept of heterogeneously integrated phased arrays was introduced in the 1990s to address the complexity and affordability of phased arrays.

The first innovations in the late 1980s were inline, single-beam, circularly polarized K-band receive and Q-band transmit phased-arrays for the U.S. Air Force. The designers realized early on the need for thinner and lower-profile tile architectures with dual polarization. There was a need to develop processes to address the short-comings of the electronics industry and packaging technology of the day. The result was a clever design referred to as the “Can & Sleeve.” It addressed performance and manufacturing issues which provided a baseline for future designs.

With the receive side of the equation completed, the next key development in the commercial SATCOM system allowed it to offload data from the platform—thereby “closing the loop” and providing the platform with true networking capability. Finally, the capability to provide consumers with an office in the sky.

The need for in-flight connectivity for Boeing’s commercial airlines business unit was a monumental task in the early 1990s due to difficulties in platform integration, extensive federal regulations, FAA certification issues, tight cost constraints, and a slowly developing market. Several immature technology areas contributed to the difficulties and complexity. Without any external options, Boeing tackled and successfully developed the first production phased arrays for commercial aviation. In 1999, The Boeing Company filed with the International Telecommunications Union (ITU) its intent to provide such service to the public through the newly created business: Connexion by Boeing.

This was done in the era before the invention of the iPod, iPhone, iPad, smartphone, or the success of startups such as Google, Facebook and Twitter. Late in 2001, the Federal Communications Commission granted Boeing a two-way license for mobile broadband satellite services to commercial airlines and executive jets.

The license enabled real-time, high-speed internet and intranet access, television and email above U.S. territory and waters. After the tragic events of Sept. 11, 2001, from a military stand-point, Connexion-By-Boeing became an indispensable system to have in our country’s arsenal—a system for full-mobile connectivity to critical government platforms with unmatched system availability and performance.

However, the impact of high-fuel prices and the business disruption was too much for many airlines to digest. Over time, commercial interest in Connexion faded away and what remained is now part of the Boeing Broadband SATCOM Network (BBSN), serving the United State’s VIP/SAM fleet.

The final application and its use to society matters, and successfully providing the product to deliver broadband mobile connectivity is an achievable goal for us to reach in the near future.

Perhaps the most important trend is in consumer demand for more connectivity. Commercial giants in 5G and LTE are moving up to higher and higher operating bands. Satellite services for mobile platforms are also providing links at K- and Ka-band.

These pressures are already driving industry to design and develop dedicated chipsets with complete System-on-Chip (SOC) solutions— RF to bits near or at every element.

Such advancements break through the packaging limitations of analog PAAs and may help us drive costs down enough to make them a commodity.

Ahead of the Game

In the last three decades, Boeing has achieved many industry-firsts in wide beam-scanning phased arrays including the following applications:

These industry-firsts came at a time when the cost to participate in the design of PAAs was high and dominated by the major aerospace companies. The cost of the design, fabrication and development of custom electronic components set the bar high for entry into this field. These technologies include Gallium-Arsenide (GaAs), Gallium-Nitride (GaN) and Indium-Phosphide (InP) monolithic integrated circuits, as well as the high cost of packaging the various levels of electronics from the antenna frontend to the back-end power supplies, RF, logic control, power and cooling distribution infrastructure.

As phased arrays experience a synergy with the commercial sector similar to that previously seen in personal computers, smartphones and digital tablets, and electronic components, certain parts of the PAA will be commodities for general use. As cost of these commodities decrease, more applications will spring up increasing the volume further.

Figure 7 - Circuit level test set up for an AUT. 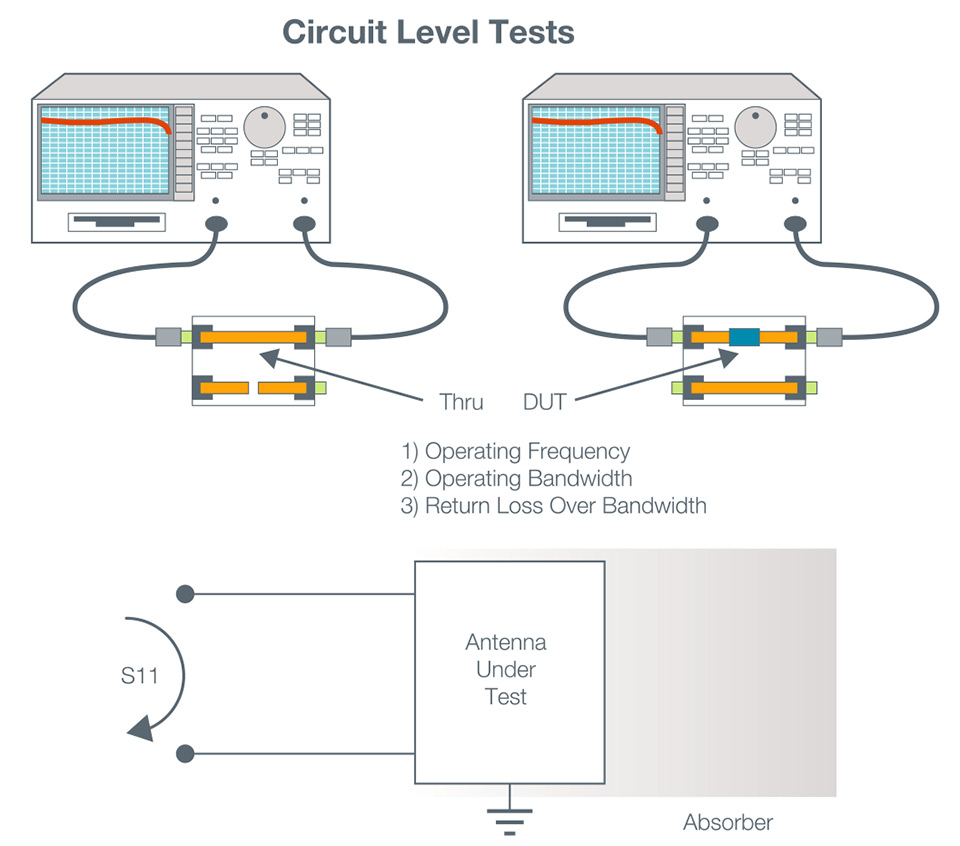 FIGURE 8 - Return loss measurements on a singleantenna over frequency. 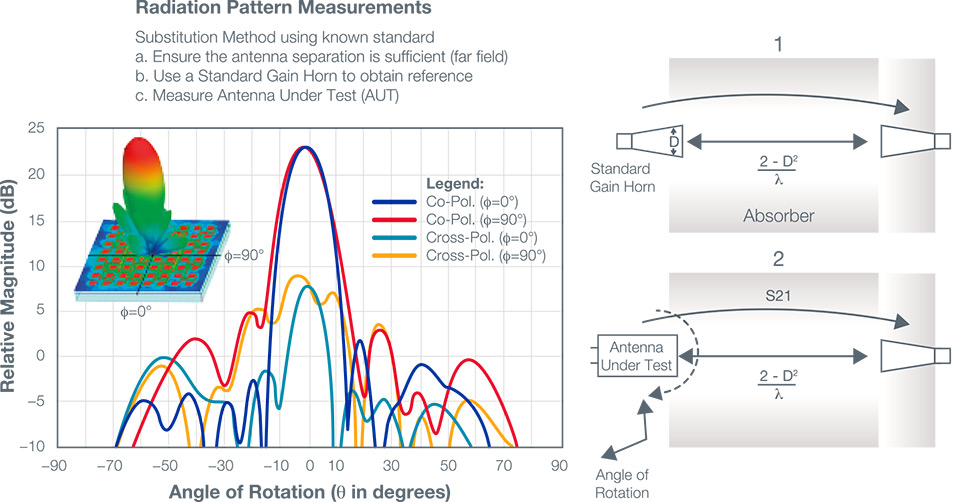 Antennas come in all shapes and sizes using all sorts of metals and dielectrics. They operate over specific bands with a bandwidth determined by a circuit and radiating properties. The size and shape defines the radiator's field-of-view, as well as the quality of transition from guided media to free space. The following is a sample of detailed exposition available in the full paper.

A device or Antenna-Under-Test (AUT) includes both circuit and radiation properties. Circuit level characteristics are measured using a network analyzer and a test setup shown in Figure 7. There are several types of test sets available including waveguide, coaxial and microstrip. Each setup includes the load standards (short, open, load) and delays used in calibration and for setting the measurement reference planes.

Once calibrated, the antenna port is injected with RF signals—the network analyzer measures the return or reflected signal off of the antenna port. The magnitude of the reflection coefficient (S11) is plotted in Figure 8 in dBs over the frequency range.