On being in tune: 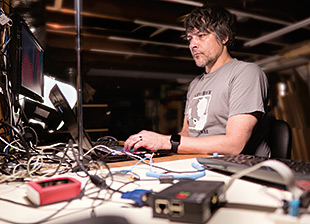 ALWAYS ON
Harris and his intellectual curiosity flow freely from his lab at work to his lab (i.e., basement) at home.

Sitting at his workbench, Matt Harris tinkers away on a software-based radio setup while losing himself in the freeflowing notes of jazz in the background.

To Harris, innovation and engineering are akin to improvisation and music—similar and symbiotic. As both a systems architecture engineer and established jazz musician, he has a similar approach to both disciplines.

The innovation of developing and integrating systems comes when team members with diverse experiences and perspectives play off of one another, listening and sharing ideas to improve on a design.

“It’s a collaboration with everyone in the band, rhythmically, melodically, harmonically, resulting in a unique composition,” Harris explained. “Your improvised solo is, by definition, a musical innovation.”

For Harris, jazz is about question-and-answer, listening and interplay. He starts with a known song—a structure or process—listens to others, then integrates his answers with a solo.

Harris brings this process of creativity as an engineer with an automated perspective to design and problem-solving through data analysis. Harris, a Boeing Associate Technical Fellow, uses large-scale, multi-dimensional simulation, data analysis and data visualization to improvise solutions.

In his role as a principal investigator for commercial product development, Harris helps shape what aircraft navigation systems will look like in the future. This means certifying new technologies, integrating complex systems, and planning for potential industry disruptors like software-defined radios and autonomy.

For example, use of software-defined radio technology could be a paradigm shift in radio navigation, Harris said. The emerging technology gives relatively easy and cheap access to the vast amount of radio signals that saturate the air and were once difficult to tap into.

Widely available, open-source software gives instruction on how to build a device that receives a huge range of radio signals—from a wireless mouse to GPS satellites—being broadcast around it.

To get in front of this growing tech, Harris drew inspiration from his high school days playing with high-voltage circuits scrounged from copy machines at the local electronics surplus store.

“He’s one of the smartest guys I’ve ever met; it’s almost scary smart in terms of how quick he figures things out,” said Tim Murphy, a Boeing Senior Technical Fellow and industry expert in guidance, navigation and control technology.

Murphy recruited Harris at Ohio University where Harris studied electromagnetics and navigation systems as a graduate student. Since Harris’s arrival at Boeing, Murphy has served as his mentor. As a musician himself, Murphy is also his bandmate.

Harris started playing the saxophone in middle school, and dedicated himself to studying jazz. By high school, he was playing with university and civic big bands.

Decades of research has shown a correlation between music and math. While it is still unclear whether studying instrumental music causes enhanced mathematical capability, the creative streak runs through many engineers who excel at both.

In preschool, Harris impressed family by correctly answering math equations, and he eventually skipped kindergarten for first grade, where his teacher described him as a “divergent thinker.”

Despite a tight family budget growing up, Harris’s mom bought him the saxophone he still treasures and uses today.

“It’s a classic and coveted Selmer Mark VI that’s a little older than me,” as Harris described it.

Seventeen years after meeting Murphy—and dozens of performances later—Harris has watched his ideas come to life at Boeing.

“The coolest new capability that I’ve helped develop is the ability to automatically land aircraft in the lowest visibility conditions using GPS with Ground Based Augmentation System,” Harris said.

To accomplish this, Harris used several complex simulation models in conjunction with analysis of massive amounts of flight data to develop requirements for airborne and ground systems, ensuring that any position errors could be bounded with high probability.

The team used models to assess the impact of ionospheric anomalies on landing system errors, and to determine the impacts of errors due to GPS signals reflecting and refracting off the airframe surfaces before reaching the GPS antenna.

The Ground Based Augmentation System (GBAS) was the solution to a decades-long pursuit, and is now being integrated at airports worldwide.

Harris and many others would go on to enhance the innovation with a Portable Ground Based Augmentation System (PBGAS), teammate William Peterson explained.

“It took a close-knit group of technical experts who leveraged each other’s skillsets and capabilities,” Peterson said.

Peterson worked on the team to develop PGBAS, which was replicated in a second-generation system that complies with new RTCA-DO-246D standards, enhances satellite navigation, and provides an alternative to the Instrument Landing System supporting the full range of approach and landing operations.

“It’s kind of an evolution in technology,” Peterson said. “Matt worked on this GPS technology in college, and even Tim (Murphy) began working on it when he was in college.”

Harris’s work on GPS systems made him the perfect candidate to inherit Murphy’s role as special committee representative for the Radio Technical Commission for Aeronautics (RTCA). The RTCA is an organization that provides guidance for government and industry standards.

As a working group chairman of RTCA Special Committee 159, Harris provides leadership and guidance on GNSS-based navigation systems at a national and international level.

A lot of work that Harris and Murphy have done, Peterson said, has been offsetting challenges presented to them.

Growing up in a small town in Ohio, Harris remembered playing a combination of tag and hide-and-seek with CB radios, using the signal strength to determine where someone was hiding, and driving around town to find them.

He also studied the specs of audio electronics in catalogues, and took an interest in the interfaces of audio systems as they transitioned from analog to digital.

His daily work, however, is much more complex than connecting boxes, as he applies automation to data analytics and system design trades that result in smaller, more accurate and robust boxes.

Reducing equipment size reduces space and weight on an aircraft, but Harris is more interested in finding new ways to automate the use of large amounts of data the equipment generates. He wants to intelligently integrate measurements from various equipment and, eventually, automate decisions made from those measurements.

This will be a building block toward inflight automated decision-making in real time, which will require technological advancements not yet realized.

As test data began to pour in from new navigation radio lab and flight testing, and the need for analysis grew, Harris and his team found a way to use automation as a solution.

Their tool is capable of auto-analyzing all the data sent by the box, though not in real time.

“It was Matt’s brainchild,” said Matt Miltner, Harris’s mentee and teammate. “The tool gave us the ability to find problems that you can’t find in the lab and may not find on a flight test, saving time and money by catching the potential problems in development.”

With Harris’s guidance, Miltner wrote code for the tool and is responsible for its maintenance and upgrades.

It has been used to determine acceptability of new MMRs for certification on various Boeing airplanes, and its agnostic qualities have proven to be valuable, Miltner said, as it’s portable to any data system on Boeing airplanes, not just navigation systems.

“So far, Moore’s Law of exponential growth in computing power for exponentially decreasing cost, size, weight and power has allowed us to automate data analysis for the purposes of complex system design and data visualization and analysis—albeit in a slower-than-real-time fashion,” Harris explained.

In other words, computers have come a long way since the Radio Shack TRS-80 Harris learned to code on.

Harris believes that next-generation airplane systems will better support safer, more-automated flight by pilots, and they will lead to aircraft that require pilot intervention in only rare cases.

“Artificial intelligence is really just complex automation, enabled to be real-time by high-powered computing,” he said. Harris is optimistic to see autonomous flight on a commercial airliner in his lifetime, but in the meantime, solving problems, researching and developing tools to get there is what keeps him satisfied.

Murphy said he wishes he could have 10 more engineers like Harris.

So, it’s only fitting that Harris’s work team—his band of engineers is referred to by others as, “The Matts.”

“He’s the kind of guy you can hand a relatively ill-formed problem to, and he’ll come back with all kinds of original thought, and even more important, defining the problem, and identifying multiple approaches to exploring it,” Murphy said.

It’s the process of both improvising music, and innovating as an engineer that Harris enjoys the most, and he credits his success to the support and talent that surrounds him.

“If you’re stuck just following processes, you may never have an innovative idea. But when you’re working with groups of people that want to hear your ideas and bounce some off of you, and you have people propping you up, you can foster innovation like a good jazz band fosters a soloist to be the best they can be,” Harris said.