However, the as-deposited surface finish is rough and causes design form, fit and function challenges; impacts mechanical properties (including fatigue life reduction); and impacts the resolution of non-destructive inspection imaging.

While there are a relatively small number of potential part applications which are non-fatigue critical, many more part application opportunities exist for aircraft components with fatigue strength requirements.

Conventional machining of rough surfaces is effective, however costly when applied to complex geometries, such as those enabled by PBF AM.

As such, the as-deposited AM surface quality is a significant barrier for widespread application of the powder bed fusion technology for aircraft components, especially for structures with fatigue and damage tolerance requirements.

While efforts are in work to improve the as-printed surface condition through the laser PBF printing process, this study focuses on using post-processing surface smoothing methods.

Several commercially available surface smoothing processes have been evaluated as alternatives to machining based on their ability to improve the fatigue life and mitigate the form, fit and function issues.

While processing cost and flow time are critical elements to selecting a viable solution, this project is primarily focused on technical performance of the smoothing technologies to help identify a path forward for future development.

All parts used in this study were fabricated from Ti-6Al-4V using laser PBF AM, followed by stress relief and hot isostatic pressing (HIP). All static and fatigue test coupons were fabricated within one AM build cycle to eliminate build-to-build variability that could complicate the ability to compare static or fatigue test results.

Prior to surface smoothing, radiographic inspection was performed on a sampling of test coupons to verify internal material quality. These inspections are intended to check for the presence of porosity or lack of fusion in the material that could impact static and fatigue test results.

The laser PBF AM processes utilized here are prone to these types of defects, which could result from a variety of powder, machine or print process parameter issues. Fatigue performance is especially sensitive to the presence of these types of defects that act as stress concentrations and crack nucleation sites within the material. In order to enable comparison of relative fatigue life data, it is imperative that the printed test coupon material is of high quality, free from defects and is consistent across the lot of coupons used.

According to surface relative roughness average, or Ra, measurements in Figure 17 and Figure 18, utilizing abrasive Process I as a secondary surface finishing step recorded the best surface Ra values for both the fatigue specimens and demonstrator parts. While Process I generates what appears to be a homogeneous surface based on lower-resolution imaging or profilometry using standard surface roughness parameters, the Scanning Electron Microscope (SEM) images on the next page indicate the presence of additional surface features.

The chemical-and-abrasive Process V hybrid surface smoothing was superior in surface roughness to both its constituent Process I and Process IIa components applied individually to the cylindrical fatigue specimens.

While this is also true for the demonstrator part surfaces evaluated, abrasive Process I applied by itself to the configured part performed nearly as well as the hybrid chemical-and-abrasive Process V. This inconsistency may be due to part geometry and/or orientation differences between the two scenarios, as well as the ability of the Process I to more easily address flat or planar surfaces.

Both Process II and Process III, which are chemical based, have no limitation in the amount of material that can be removed. Chemical metal removal processes can address support structure interfaces or residual rash.

However, this requires significant material removal from targeted surfaces which requires masking and other controls to ensure geometric stability of the finished part. Abrasive processes such as Process I are not viable options for addressing support structure interfaces.

The final surface quality achieved by all commercial processes are geometry dependent and require fixturing and varying orientation inside a process tank for optimal results. Chemical metal removal processes are relatively inexpensive compared to abrasive processes, but carry with them the associated risks with handling hazardous chemicals.

Prior to fatigue testing, static test of both as-printed and machined surface tensile coupons was performed to establish static strength properties for the baseline surface conditions and facilitate selection of initial fatigue test stress levels.

Testing was performed per ASTM E8, and a constant displacement rate was utilized through failure of the test coupons. Baseline fatigue test values were generated per ASTM E466 for both the as-printed and machined surface conditions to serve as a basis of comparison for surface-smoothed fatigue test results.

While the as-printed surface fatigue life is significantly lower than that of machined, the results are generally consistent with good repeatability as indicated by stress levels for which multiple test replicates were performed.

Secondary surface smoothing, as with that employed with hybrid chemical-and-abrasive Process V, produces a more consistent and pit-free final surface which is capable of fatigue life similar to that of a fully machined surface.

K. Channa R. De Silva is a chemical engineer in Boeing’s advanced research and technology organization and with expertise in surface treatment and analysis. 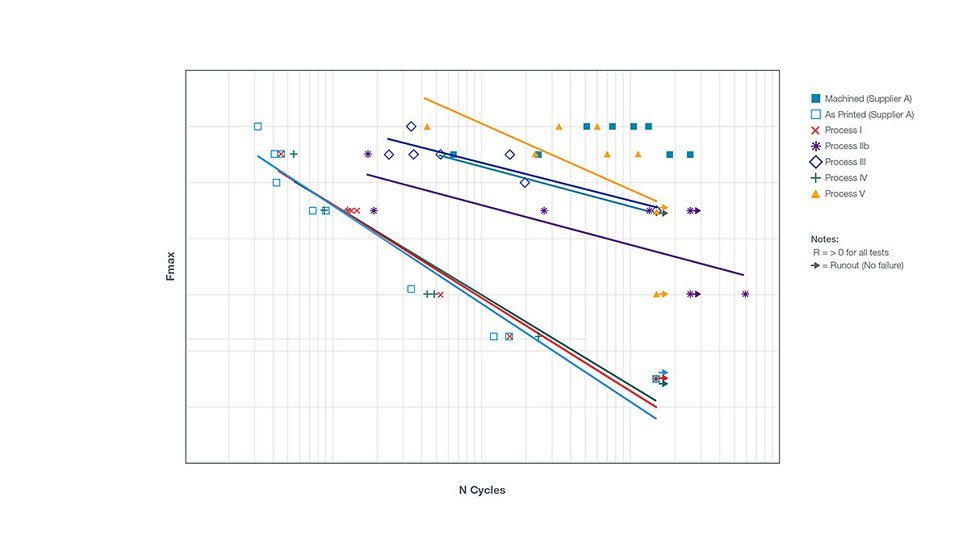 Summary descriptions of each commercial and hybrid smoothing process evaluated

Is an abrasive smoothing technology.

Is a chemical metal-removal process and has no limitations on material thickness removal. As such, this process was evaluated due to its capability to remove material beyond the total roughness and perhaps remove subsurface defects.

Includes a batch of as-printed parts and test coupons that were pre-treated with dry abrasive media blasting. Since Process I is only capable of removing a minimal amount of surface material, media blast pre-processing was applied to reduce the initial surface roughness for Process I to enhance surface material removal.

Is another hybrid approach. Between the two steps employed by Process II, the chemical process component (Process IIa) is mainly responsible for material removal. And the abrasive Process I component is meant to target aesthetic improvement. Based on prior evaluation of electron beam powder bed fusion Ti-6Al-4V parts, it was observed that Process I can generate uniform surfaces. As such, the combination of Process IIa, followed by Process I was evaluated.