Model and Analysis of an Active Cradle System 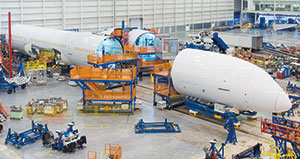 AIRCRAFT IN ASSEMBLY
A 787-10 fuselage in early stages of the alignment and joining process.

One of the most challenging aspects of manufacturing Boeing products is the integration of large-scale structures. In addition to the sheer size, airframes have specification tolerances that are stricter than smaller structures.

One specific example of this is the fuselage joining process. Not only must the segments be aligned, the gravity-induced deformations must be accounted for.  Because of the massive scale involved, an aircraft fuselage is typically manufactured in sections.

The sections are attached later by drilling holes and applying brackets and bolts. Because it is impossible to build the subsections to arbitrary precision, the fuselage sections might not align properly and the attaching of sections must be delayed. There may be extensive additional work to overcome.

To address this challenge, Boeing is working on an active or adaptive cradle. It consists of a frame with actuators positioned only along the lower half of the barrel, and forces can be applied to these actuators so that the barrel can be adequately deformed to match the contour of the adjacent section, allowing the fastening process to take place.

In this paper, we describe the mathematical model used to predict the behavior of the fuselage sections as they are modified by the cradle.

Natural questions regarding such systems include (1) how does it operate and (2) what degree of risk, meaning unexpected damages to the fuselage, does it have? The basic notion of an active cradle is that a section of the fuselage can sit in a cradle, and forces can be applied at different locations along the bottom half of the fuselage barrel edge to achieve desired displacements all around the barrel aligning the section for attachment with its adjacent fuselage section.

Mathematical model and algorithms for computing the optimal forces needed to achieve desired displacement were fully described from a prior Boeing technical project. One of the concerns related to such an active control system is whether the process or applied forces can lead to unexpected material damage.

The purpose of this paper is to address such concern by establishing a theoretical result that provides conditions under which we can ensure we are safe from causes of unexpected material damage. We further perform statistical analysis of the data obtained from actual experiments and derive statistical inferences.

Given a barrel with initial displacements from nominal shape b0 ∈ Rm, the objective of the active cradle system is to compute forces x ∈ Rn so that the following condition is satisfied:

where δ > 0 is the maximum allowable deviation from nominal shape. That is, we seek to find forces x to deform the fuselage shape sufficiently to counteract the displacement b0 so that all displacements from nominal are within the maximum allowable deviation. We model the forces as being normal to the barrel with positive forces pointing toward the interior and negative forces pointing outward.

The displacements are measured in normal-tangential coordinates, and we assume that m accounts for this; i.e., there are actually m/2 measurement locations, each location with normal and tangential components, so that the resulting vector b is of size m. The system is currently designed to apply only normal forces. Our model and analysis still works when considering tangential forces, but the mathematics become a little more complicated (and the subsequent optimization a little more challenging).

Efficiently solving any of these problems in practice requires a little more reformulation. In practice, the optimization process can be applied iteratively to achieve a desired and optimal solution. An active control system iterates between applying optimal forces and updating the displacements as the process proceeds. In each iteration, two tasks are based on the behavior of the structure φ, and the optimization process O.

One of the major concerns related to the active control system is whether or not the optimization process and the fixed-point iteration can lead to an unexpected outcome in which the material is damaged. That is, unexpected displacements in the control loop which could damage the material.

The possible causes of material damage include:

Material strain is computed at the finite element analysis (FEA) level, and the strain limits are roughly 1.5 percent of the length of the element. Because this is assessed via FEA, strain checks cannot be efficiently performed inside a control loop. If we make the reasonable assumption that corrections to the initial optimal forces inside the control loop are small compared to the initial forces themselves, then the strains measured by the FEA when optimal forces are applied should be sufficient to enforce the safety concern that strain limits never be violated. It is unclear at this point how to incorporate strain limits into the optimization problem. Strain limit violation was never observed in earlier analysis.

The function φ is the physical deformation of the fuselage barrel as an unknown function of applied forces and is essentially a black box. The approach taken here is to construct a system matrix as an approximation of φ. In practice, the construction of a system control matrix can be accomplished either from a detailed FEA or by actually physically deforming the barrel and taking precise measurements. This is done by choosing a set of suitably defined unit vectors of forces, applying each set of unit forces and measuring the resulting displacements. The resulting measurements become the columns of the system matrix.

Because of how fuselage sections are constructed, we only consider actuator positions that coincide with stringer locations on the bottom half of the barrel so that the structure is not damaged by applied forces.

A possible actuator location (stringer) is called a control node. On the other hand, displacements are measured at specific locations around the fuselage barrel called response nodes. Control node and response node locations are given in terms of azimuth around the fuselage barrel, with the convention that the crown of the barrel is set at -180 degrees, increasing counterclockwise to 0 degrees at the keel and back to 180 degrees at the crown again. A fuselage section was used in our experiment. There are 10 control nodes, 241 response nodes from the Targetless Laser Locator System (TaLLs) and 71 from FEA.

Although forces were only applied in the normal direction so that displacements in the tangential direction are small and can be ignored, displacements in both directions were recorded and analyzed. In addition, locations of response node results from FEA are smaller than those of TaLLs. A smooth spline model is used to interpolate the displacements simulated by FEA to the response locations taken by TaLLs so the differences can be computed.

To perform the analysis, we took advantage of the software tool Joint Fuselage Analysis Matlab Tool developed by Mark Abramson under the Boeing Active Cradle Project.

Below are the steps we performed:

In this report, we described the mathematical model for an active cradle system to achieve desired displacements all around the aircraft barrel to align the sections for attachment.

Most importantly, we established conditions under which no material damage will occur, and we reported the choice of threshold parameters that governs these conditions. A full accounting and mathematical proofs are available in the full paper online.

Figure 3(A) - Histogram of all residuals in all directions. 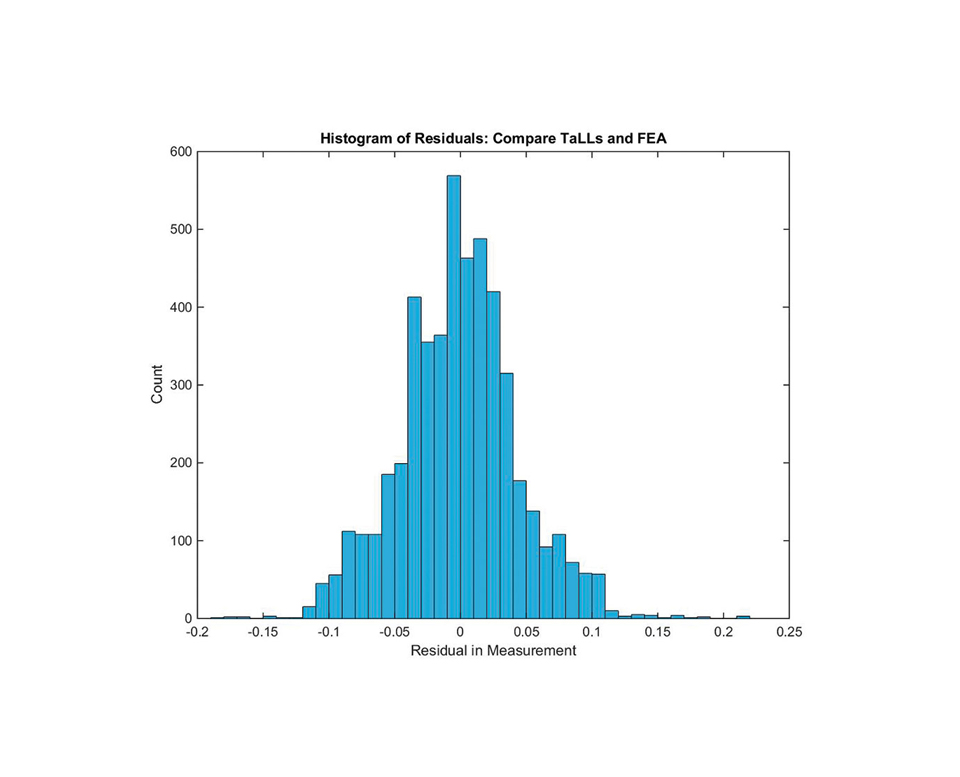 Figure 3(B) - Histogram of residuals in the normal direction. 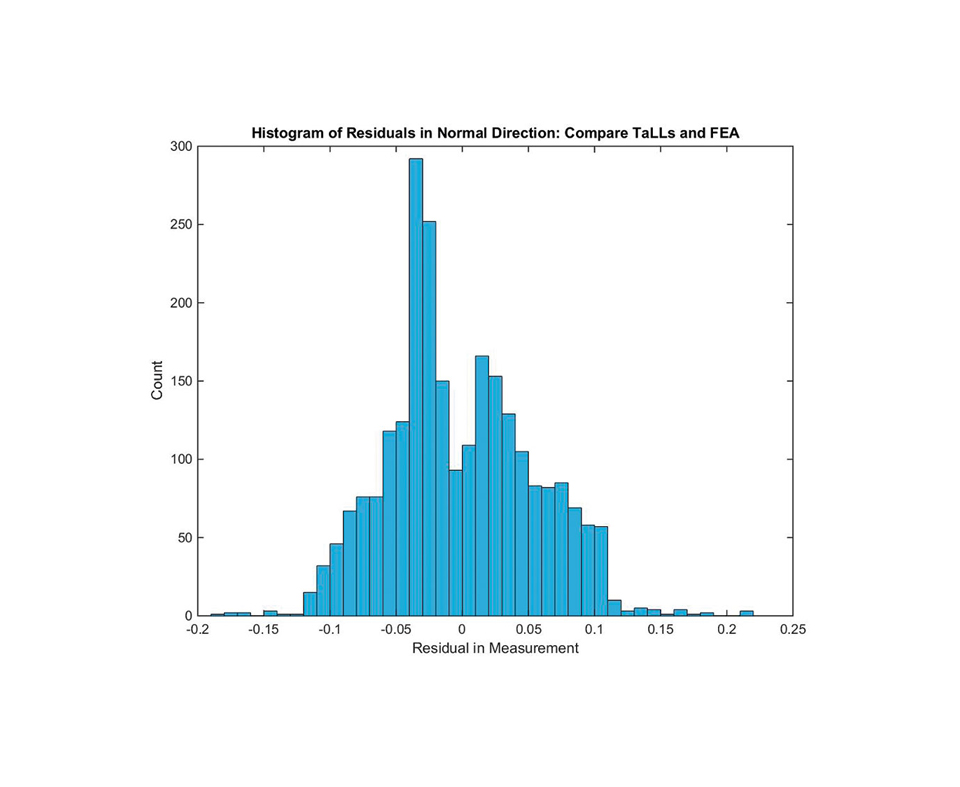