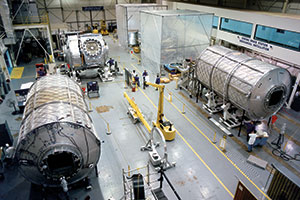 DESIGNED ON EARTH, ASSEMBLED IN SPACE
Boeing engineers working on production of ISS module Unity in 1997.

The International Space Station’s contribution to human knowledge is measured in thousands of experiments, hundreds of spacewalks and a generation of life in space.

A unique laboratory orbits overhead as a pinnacle of human achievement. It makes fresh contributions every day to improve life on Earth and pave the way to success in future space exploration.

The achievements of the International Space Station (ISS) began over 20 years ago with the launch of a modest module from Russia and a connecting node from the United States.

For Boeing, the journey had started years earlier with the first space station designs. Changes cycled through the system and ultimately a new international partnership with Russia cleared the way for humanity’s most complex manufacturing project—a spacecraft assembled in Earth’s orbit.

The International Space Station enables future exploration by validating key technologies, systems and sciences that help us understand how astronauts will live and work through long-duration missions,” said Peter McGrath, a director in Boeing’s Space Exploration division. “It also serves as proof that Boeing and our partners have the engineering and operational capabilities to assemble a successful, habitable and sustainable structure in space.”

On Nov. 20, 1998, the world watched as the Russian-built Zarya module launched into orbit. Two weeks later, NASA’s space shuttle Endeavour launched the Boeing-built Unity module. During three spacewalks on the STS-88 mission, the two space modules—engineered on opposite sides of the planet—were joined together in space, marking the beginning of an unprecedented global effort to construct the ISS.

Boeing’s accomplishments in low-Earth orbit have continued over the past two decades. In 2018, a team of engineers developed software that doubled the downlink speed of ISS computer systems, allowing more research and data to be transmitted at higher speeds to researchers on the ground.

Recently, Boeing and NASA teams began the process of installing a new set of Boeing-built lithium-ion batteries for the station. Capable of storing more energy than the station’s current nickel-hydrogen batteries, these upgraded batteries can also be charged and discharged more rapidly, and aren’t as susceptible to the “memory effect” that occurs when a battery is recharged before it is fully empty, diminishing its overall capacity.

Boeing engineers also built and tested the mechanisms that will connect future Commercial Crew spacecraft with the ISS. The first International Docking Adapter (IDA) was delivered to the station and installed during a spacewalk in 2016. The second IDA will be brought to the station on a future cargo resupply mission. When both docking rings are in place, the station will be equipped with physical connecting points for astronauts arriving to the orbital platform aboard America's first human-rated spacecraft since the space shuttle.

Selected by NASA as the prime contractor for the ISS in 1993, Boeing remains responsible for maintaining the station at peak performance levels through a dynamic series of missions: Since 1998, the ISS has hosted 232 individuals from 18 different countries. More than 200 spacewalks have occurred, totaling more than 1,300 hours to build and maintain the station. Boeing teams support ISS from the ground with operational and technological solutions that continue to advance ISS mission capabilities.

The station, now the size of a U.S. football field and weighing almost a million pounds (453,592 kilograms), is an engineering marvel unlike any the world has ever seen.

Traveling at 17,500 mph with an altitude of around 250 miles above Earth, the orbital laboratory hosts a wide spectrum of scientific research leading to profound discoveries in fields as diverse as medicine, agriculture, robotics and astrophysics.

Groundbreaking experiments conducted for programs like Genes in Space and MassChallenge not only benefit life on Earth, but also serve as critical steps in expanding humanity’s footprint in deep space. The microgravity environment aboard ISS has been an optimum setting for thousands of studies, including new, more effective cancer treatment options and the development of medicine that has doubled life expectancy for thousands born with Duchenne muscular dystrophy.

“The magnitude of Boeing’s accomplishments over the past 20 years reaches far beyond the company,” said Mark Mulqueen, who manages the International Space Station program for Boeing.

“ISS remains a beacon of hope for what humans can accomplish when we come together in support of innovation and exploration,” Mulqueen added. “The groundwork we have laid through collaboration with NASA and our international partners to build and support the station will allow for a robust human presence in space for years to come.” 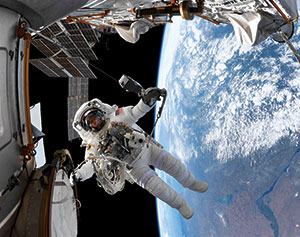