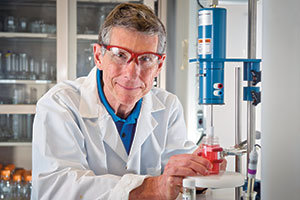 Electroactive polymers (EAPs) and inherently conductive polymers (ICPs) have been the subject of a great deal of research since the discovery and initial development of ICPs more than three decades ago.

Because electrostatic discharge and electromagnetic interference are major applications of electroactive polymers, these technologies are of high importance to aerospace.

Electroactive polymers are used today in applications like sensors and actuators for electronic appliances.

But other applications of electroactive polymers could include actuators and batteries, in addition to sensors and capacitors. The increasing need for electromagnetic interference shielding, for example, will likely increase the demand for this technology. And the electroactive polymer market is expected to exceed more than $6 billion by 2023, according to an August 2018 report by the global consulting firm Market Research Engine.

Inherently conductive polymers exhibit a wide range of electrical conductivity—as well as a range of ambient stability in exposure to air and water—that apply to a number of aerospace applications. Though early ICPs were found to be non-processable, recent advancements have yielded highly soluble and processable materials that are easily fabricated into films, coatings and structures.

The proper combination of chemical composition of the polymer can produce materials with especially high conductivity and stability that are on the edge of truly metallic behavior. Conjugated polymers also are between reduction and oxidation charge states, allowing them to be electrochemically switched between charge states.

Boeing research efforts have focused on the synthesis of a solvent soluble polyaniline, PANI DNNSA—an environmentally stable ICP that is readily formulated into electrically conductive coatings. Such solvent soluble ICPs are not available commercially. The synthetic process to produce PANI DNNSA utilized the emulsion polymerization of aniline in the presence of the dopant, DNNSA, and the oxidant. The reaction is highly exothermic and requires precise temperature control at 0 degrees Celsius to prevent the formation of byproducts.

On a laboratory scale, utilizing a batch process, controlling processing is not an issue due to the small volumes involved, usually about 1 to 2 liters. However, to scale processing, temperature control is an issue because generation of higher temperatures may be unsafe in addition to yielding poor quality product. With these issues in mind, a continuous flow process for polymer production that would allow for very efficient temperature control of the reaction process was necessary.

As part of the effort, Boeing collaborated with the Commonwealth Scientific and Industrial Research Organisation (CSIRO), a partner in Australia with worldleading expertise in continuous flow processing technology and chemical synthesis. This technology partnership spans more than 29 years, over which time Boeing and CSIRO have invested more than $140 million toward cooperative research. CSIRO’s capabilities span materials discovery, characterization and optimization of chemical synthesis, pilot scale, and technology transfer to manufacturing.

The purpose in pursuing a continuous flow process was to:

3. Enhance product quality through precise temperature control (no exotherm as in batch processes).

4. Increase through-put greater than 50 grams per hour on demand synthesis.

In order to rapidly commercialize this polyaniline product, the flow process co-developed by Boeing and

CSIRO researchers was transferred to Boron Molecular, a specialty chemical company in Melbourne, Australia, for production and supply to Boeing.

Under the agreement, Boron Molecular will be able to market the product globally. The agreement will simplify the commercialization process and allow the two organizations to more rapidly bring products to market.

The materials of the future

Two focused applications have been driving ICP near-term development and are now possible due to the continuous flow process and enabling processing at commercial scale: electrostatically dissipative coatings for satellites systems and conductive coatings for rotor blade de-icing.

A new formulation for controlled-resistance conformal coating (CRCC) used on Boeing satellites was formulated using PANI DNNSA. The CRCC is used as a static dissipative coating on printed wiring board assemblies to prevent electrostatic discharge. This new formulation of the polymer could provide more than just a material replacement but may also expand material capability. The increased solubility of PANI DNNSA allows for less solvent to be used, thus allowing for greater viscosity control. Also, the pursuit of a frozen pre-mix will be an advantage simplifying the shipside use of this material. Both of these improvements will widen the possible uses of the CRCC and greatly reduce production times by reducing the number of steps involved in the preparation of satellites for our customers.

A challenge for rotor blades is the compatibility of an effective and reliable de-icing system that can be coupled with modern, leading edge erosion protection. This is especially the case for incorporation of polymer erosion coatings that are thermal insulators, and for de-icing systems that depend on the use of durable erosion impact protection for longevity from aggressive environments.

An alternative method to conventional rotor blade de-icing is sought using these electrically conductive polymer coatings to maximize de-icing performance and reliability, while minimizing the cost and maintenance associated with conventional electrothermal systems.

WHERE IT FITS - Conductivity versus applications waterfall 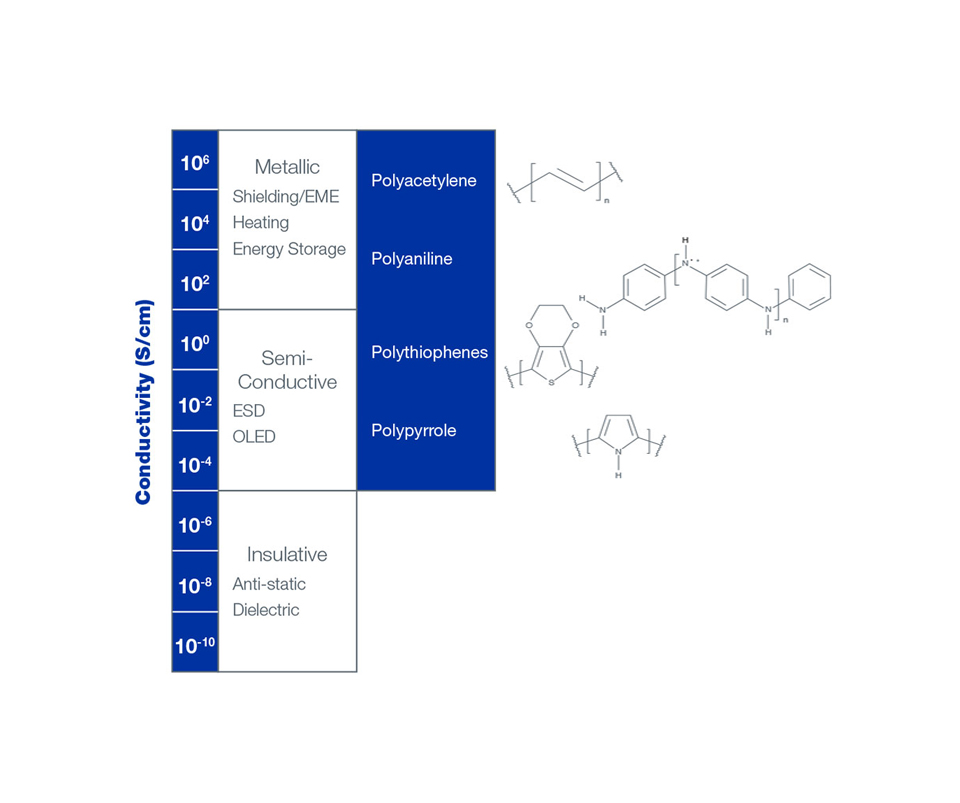