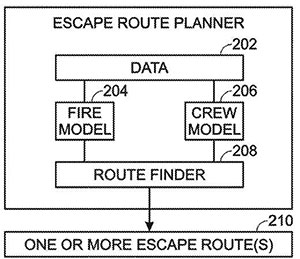 Systems and methods for real-time escape route planning for firefighting and natural disasters.

As they battle to contain and extinguish the fire, firefighters are often just one educated guess away from being trapped by the fire. Wildland firefighters need to be able to immediately identify multiple escape routes and multiple real-time, safety zones.

Technology must be developed to reduce subjectivity and improve the decisions in real time. Boeing recently obtained a patent for dynamically planning escape routes across terrain based on data related to the fire, the crew and the geographical fire area.

A routing algorithm embodied in a computer integrates data from geographical databases, current weather forecast information, fire fuel estimates and locations, and real-time location reports of personnel, resources and equipment to identify routes and areas that are known to be safe.

A human factors model takes into account the physicality of individual firefighters, their level of exhaustion, and the weight of equipment they are carrying. The output data are overlaid and routes areas are mapped and rated based on suitability and the firefighter's preference. The firefighter sees all of this on a mobile device that includes a display showing the real-time routes and conditions, which then enables the best possible decision.

When products become larger and more complicated, it becomes considerably more difficult to track all of the parts and processes required to manufacture them. In a global organization comprising technologists from all walks of engineering, seamless and real-time collaboration among these groups is crucial to ensure that products are properly assembled.

Communication is critical and accountability is key. This recently granted Boeing patent describes how to manage engineering and manufacturing changes to a product, specifically changes to a product before, during and after the product is in production. The system is composed of a manufacturing process management computer device that is configured to manage engineering requirements based on completed operations, pre-generate and then manage a manufacturing bill of materials.

Many vehicles, including aircraft, typically operate in extreme environments. Because of this, ignition hazard avoidance is a vital element in aircraft design and testing, typically involving reducing the likelihood of ignition, containing the ignition hazard, or withstanding the ignition hazard.
Ignition hazard testing is vital. But it could also involve an explosion, and is time-consuming, cumbersome and expensive. Test systems often require specialized equipment and facilities that consume resources in design, construction, troubleshooting and disposal.

Testing determines whether the flammable components within the foam ignited in response to the energy discharge.

Using a foam with flammable components can eliminate the need for specialized containment vessels, which would make testing easier, quicker and cheaper. Using foam also allows the testers to limit the volume of flammable material to a thin shell surrounding the test article, thus potentially making the tests safer and requiring fewer restrictions on the test facility.

Sealants generally protect the underlying metal from corrosion. Nonetheless, if the integrity of the sealant’s coating is compromised, the underlying metal, which is not visible beneath the sealant, may be compromised. Thus, there is a need for more effective and corrosion-inhibiting coating methods that may enhance sealant performance while being better for the environment.

This Boeing patent granted in January describes a method for inhibiting corrosion by treating metals with the combination of a sol-gel and a disulfide group. Sol-gels, such as Surface Pre-Treatment AC-131, are zirconium-based systems for promoting adhesion of paint to metal surfaces but offer minimal corrosion protection on their own. However, combining sol-gel with a disulfide compound results in a corrosion-inhibiting system that contains no hexavalent chromium. The disulfide compound within the sol-gel protects the metal from corrosion while not endangering the environment. This method offers Boeing (and any future licensees) the opportunity to “go green” without getting rusty.

Composite parts can be constructed using various curing processes, including the use of a rigid cure tool/mandrel on which the composite material is applied and then cured into a rigid composite part using an autoclave applying heat and pressure to the part during the cure cycle.

Because some composite parts contain internal cavities that collapse under autoclave pressure, placing a bladder or mandrel tool in the cavity is necessary. The problem with many bladders or mandrels, however, is that they are inflexible. A rigid tool is optimal to lay up composite laminate parts at room temperature. However, a flexible tool is optimal during high-temperature curing to conform and evenly distribute pressure across the part.

One of Boeing’s first patents issued in 2019 describes a tooling solution that is an elastomer matrix with magnetic components that create a rigid cross-section during automated lamination. When heat and pressure are applied during cure, the magnetic field dissipates due to the Curie temperature effect, and the tool becomes flexible, which allows the cross-section to conform and expand as required.