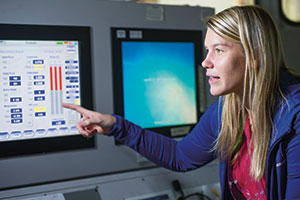 TESTING THE MACHINE LEARNING
Industrial engineer Margaret Eicks validates the machine by turning it on and off at the right hole locations from the early fastener feed predicted model. This test confirms that the file being sent to the machine is being captured, read and communicated to the machine correctly.

Introduction of automated technology saves even more time in assembly.

Technologists from across Boeing are using artificial intelligence to drive even more efficiency from precision automation equipment assembling aircraft in South Carolina.

The advances, supporting fuselage section assemblies for the 787, are greatly improving the productivity of four German Broetje-Automation skin-fastening machines, equipment that is already highly engineered and specialized for aerospace production.

“Previously, the Broetje mechanics manually turned on/ off the early fastener feed feature based on their individual experience and judgment, but with limited usage and success,” Venkatraman said. “The introduction of automated early fastener feed technology has been saving up to five hours of flow for each line since April.”

“As part of the work, we developed machine learning models using model-based clustering and generic algorithms to cluster the grip-length of the fasteners from historical data and predict when the early fastener feed can be turned on and for how many continuous holes,” Venkatraman said.

Savings have increased as the machine-learning models are constantly learning from new data, and data scientists believe there’s potential to get even faster and more accurate.

Even more exciting, Venkatraman said, is the potential for reuse and replication of the techniques in other Boeing production facilities. This includes not just the other skin-fastening machines but anywhere predictive capabilities can be used.

“Choosing the right machine learning algorithm is a balancing act based on our business goals, the desired accuracy, scalability and speed of predictions. It required us to try many different algorithms to come up with the most optimal option. At the same time, we needed something generalizable across the other factory machines,” Venkatraman said.

Margaret Eicks, an industrial engineer, and Michael Rojas, a data scientist, are teaming up to replicate the machine-learning technology across other automation cells: for example, the Quadbot machines supporting parts of the 787 fuselage section assemblies. Meanwhile, development work has begun for replication on Boeing’s Flex Track machines, as well.

In the immediate future, the team wants to see how it can reuse this model to drive other predictive capabilities across 787 aft body to support 787 rate increase. Long term, the team wants to replicate and expand this work to other aircraft production programs.