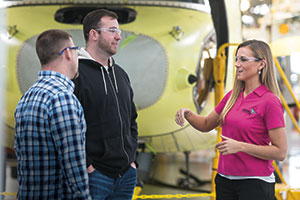 Industrial engineer Lauren Heisey has an interdisciplinary approach to life and to her work.

As a child, Lauren Heisey shadowed her grandfather and father at Hess Garage, the family’s automotive repair shop in Mechanicsburg, Pennsylvania. As the adults worked on cars, Heisey and her brother, Jordan, sat within earshot, picking up lingo from the shop floor and computer programming from the office.

She and her father still do all the maintenance on her car, and the oil changes she handles solo. They even participated in a tire-changing competition at the Pocono Raceway in 2015 where Lauren swept the competition and took home first prize in the women’s category.

“My dad has a mechanical mindset, which then translated to both of us” Heisey said, referring to her younger brother who is a mechanical engineer living in Austin, Texas. “We shadowed [Dad] on car and house projects because we weren't allowed to stay inside and watch TV all day.”

Now seven years into her Boeing career, Heisey works with cargo helicopters outside Philadelphia. As an industrial engineer, Heisey works with production and the manufacturing of the Chinook. She finds ways the team can improve processes for a safer workplace and become more cost-effective. Heisey enjoys her broad role because she interacts will all facets of engineering at the facility, helping other engineers prioritize the production when things need to be built outside the traditional order, for example. Her work is partly in the building’s office area, but mostly Heisey spends time on the production floor where she can see if the current process is working and how to make things more efficient.

Previously, Heisey also worked on a project to improve the processes for salvaging parts from used transmissions. The new process required a redesign of the facility, replacing work tables with conveyor belts containing only one part at a time so employees could review parts faster.

“She’s always been very data oriented and very good in Excel, as well as streamlining repetitive processes that a lot of industrial engineers do manually,” said Timothy Lunger, a senior manager in production engineering, and one of Heisey’s mentors. “I think Lauren really exemplifies someone dedicated to whatever it takes to support us in production engineering.”

Heisey’s parents intentionally brought their children to work and even financial meetings so they would have a broad knowledge base. In addition to the shop, Debbie Heisey, a nurse, took her children to the hospital on designated days.

The Heiseys recalled one afternoon when they gave Lauren, who was in elementary school, spare wood pieces, a box of nails and a personalized hammer. They told her to go and play. When Lauren returned, she presented her father a message nailed into the wood: “I love Dad” with a heart symbol for the word “love.” It’s still displayed in their house along with other items Heisey has crafted, such as a wine rack she made from scrap wood.

“She’s always been a driven child, and she’s very caring, and willing to learn,” said Debbie Heisey. From seventh grade through her senior year of high school, Heisey participated in her local chapter of the Technology Student Association, which engages students in science, technology, engineering and mathematics competitions and leadership opportunities. One year Heisey entered the flight challenge category, where students transformed a piece of balsa wood into a small airplane that could fly and land safely. Heisey made it to the state competition with her airplane model. Although she entered categories like nanotechnology or biotechnology, the flight challenge was her favorite.

It wasn’t until high school that Heisey officially chose engineering for her career path. Her physics teacher, David Shoemaker, encouraged Heisey to take a look at engineering since she grew up in a family of mechanics. It was at that moment, while standing in the halls of Mechanicsburg Area High School, Heisey decided to go for it.

The decision led her to Boeing as an industrial engineer, and she is forever grateful to Shoemaker. “I never actually told him that.” Heisey said. Shoemaker recalls Heisey was a quiet student.

“I remember her as being typical because the high school physics class was not easy for her,” he said. “She worked, she studied, and she came in and asked questions. She did not do great on every test. There were struggles, but yet, she took those struggles and worked with them. What I’ve seen in my classroom currently, and have for years, is my class is rigorous. In some cases this is the first class [students] struggle with,” he explained. “That’s normal. That’s how science works. It’s not easy.”

Shoemaker often finds himself reminding students that having to study and work for good grades in science doesn’t mean you should shy away from it.

More people will need to enter the engineering field in the next five years to keep up with the anticipated 4 percent job growth, according to the U.S. Bureau of Labor Statistics. Industrial engineering employment is projected to increase 10 percent from 2016 to 2026.

In addition to her work as an industrial engineer, Heisey also served as president of the Boeing Women in Leadership (BWIL) Philadelphia chapter for the past two years. Both years of her time as president, the chapter earned the Business Resource Group Impact Award, as well as increased membership by 35 percent.

“Lauren has tremendous potential and almost unbridled energy that makes me feel really good about the future of our company,” said Randy Rotte, executive sponsor of BWIL and a director in vertical lift programs at Boeing. “Being closer to the end of my career than the beginning, one of the more important roles I see is trying to prepare and foster that next generation of leaders for the company, and Lauren is certainly one of those.”

As a versatile discipline that covers broad fields of manufacturing, supply chain management, process flow and control, and systems engineering, industrial engineering seemed to be a natural calling for someone of Heisey’s wide-ranging interests and technical capability.

Heisey has also set her sights on the sky, pursuing a pilot’s license for fixed-wing aircraft, which she intends to complete in early 2019. It wasn’t until Heisey learned multiple co-workers were also working on pilot licenses that she considered it. Adding pilot to her resume was on par with Heisey’s other hobbies of scuba diving, sky diving, skiing, riding motorcycles and working on cars. (Her mother refers to Heisey as a daredevil.) Rotte, who also flew helicopters for 26 years with the Army, enjoys hearing Heisey’s updates.

Bob Buccino, certified flight instructor with FlightSafety International where Heisey is a student, also worked as a chemical engineer and enjoys when he and Heisey get to “talk shop” about engineering.

Although Heisey’s goal is to earn her pilot’s license, she’s also looking forward to another milestone. “I always wanted to go into aviation because my dad likes it,” she said. “I know it sounds cheesy, but I want to take my dad up for a ride once I’m certified.”