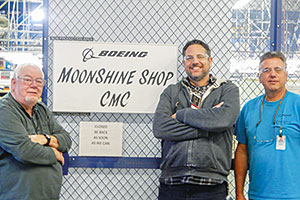 At Boeing’s factory moonshine shops, innovators make something from nothing.

With the parts to his parent’s VCR strewn across a table, young Tim Pope had a clear picture of what he wanted to do in life.

“If anything had screws in it, I was taking them out,” said

Pope, a “moonshine” mechanic in Frederickson, Washington. Not much has changed for Pope since his curiosity seeking childhood.

“To this day, I’m that way,” he said. “If my wife’s phone doesn’t work, I take it apart and try to fix it. In my home, I do everything. My attitude has always been, if somebody can work on it, then I can.”

Pope takes that same attitude to work every day where he helps support the fabrication and assembly mechanics working on the 777, 777X and 787 programs. It’s a pattern in Boeing factories.

Although they’re known as the Moonshine Team, operations manager Bob Brady and his highly skilled crew in Everett, Washington, would prefer to be called the “Sunshine Team.”

With origins in Japanese manufacturing, these moonshiners are mechanics tasked with identifying production issues and quickly creating solutions.

They often work nights, ostensibly by the light of the moon, thus their name.

“We don’t do things under the cover of darkness,” Brady said of his small shop that fabricated a big fix on a tool used for installing the 787 landing gear. “We embrace everybody so the customer gets what they want.”

For example, Brady’s moonshine shop was asked to come up with a solution for a “gagging” tool used to compress the 787 landing gear for installation. Previously, mechanics balanced on a 4-inch beam about 4 feet off the ground while manipulating a 35-pound tool to perform this task.

After a safety request was written on the tool, the moonshine shop went to work, devising within days a broader platform using 50 percent recycled materials. Not only did the team provide a safer environment for mechanics, but it saved the company hundreds of thousands of dollars it would have cost had the vendor gotten involved with the issue.

“Engineering was quite impressed with our fix, and they joined us to help,” Brady said. “Between moonshine and tooling (employees), we came up with a solution within a week and had something to work with.”

The gagging tool is just one of several fixes Brady and his team—Jason Hennerberg, Danny Boglivi, Auwyn Hockett, Dan Pilgrim and Keith Gepner—have created over the years. In 2017, the inventive crew came up with a loading cart that eliminated heavy lifting for 787 workers and saved the company about $1.2 million over three years.

“We create interim tools quick and effectively to keep workers from getting hurt,” Brady said. “We like to say we work by the clock, not the calendar.”

Boeing adopted the moonshine method in 1995 as part of implementing a Japanese kaizen philosophy, which means "efficiency" or "continuous improvement." Lean activities, for example, are a large part of this philosophy in the manufacturing sector. Since then, Boeing has hosted a variety of challenges and events, including “Moonshine Wars” competitions. Boeing has also patented several innovations originating in the moonshine shops.

Moonshine is about creating something of value from items already on hand, according to consultants from Shingijutsu in Japan, who teach the moonshine method. Back in Frederickson, Pope and fellow moonshine teammates Anthony Lenting and Wayne Howard are tasked with getting parts efficiently to the mechanics in ergonomic ways.

Whether it’s putting wheels on the side of a three-step ladder for easier mobility or fashioning a resin stir-stick out of a tongue depressor, they’re up to the challenge. Their shop recently devised better cure boxes, a way for mechanics to cure the composites used on the empennage. The oven previously used to cure the tail section of the plane had to be lifted with a crane and was difficult to maneuver into place.

The moonshiners built new cure boxes that were on wheels, more compact and designed specifically for the part. The quick fix cut 30 minutes off the setup time.

“For composite parts, because they are not always uniform, we use a moldable plastic shim material. It’s resin-based material that we have to put between the composite part and the titanium pivot-fitting. They have to give this part a flush-mounting surface. So we use this moldable plastic shim material. That is the material we’re curing in place.”

Moonshiners enlist a “try storm” method, where they build a concept and tweak the parts that don’t work until they do. Because of deadline constraints, it’s much harder for engineers to apply a similar approach.

Before the cure box solution, mechanics were using an awkward $60,000 device that included fans, heaters and various other components. The new self-contained cure boxes encapsulate the heat to cure materials on a part and cost under $10,000.

The moonshiners called upon their own experiences to deliver a better method.

“As mechanics, we are on the floor and understand how things work,” Pope said. “So we were able to put together this much simpler unit, using technology that we know because we use it in our other areas. We were able to use existing things in the shop, like the shop air, to power the fan in conjunction with the process heaters. Using the shop air, it’s basically a free resource for us to push that heat through a manifold to heat up the chamber. Because we had floor knowledge in the shop, we could see it clearer than the engineers who are up in a room asked to build an oven.”

The serendipity of working in the moonshine shop makes work enjoyable for Pope.

“They come to us for everything and anything,” he said. “We continuously make something out of nothing. We literally have drawers in our shop that say ‘opportunity’ on them, because it’s random stuff that someday is going to end up being the perfect solution for something.”