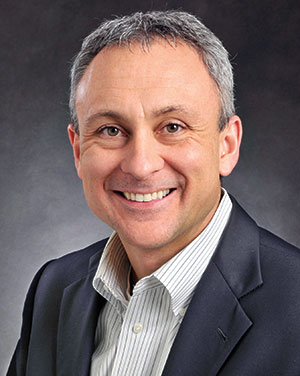 When history books are written thousands of years from now, the world will expectedly remember our society for medical advances, miniaturization and the impact of both the internet and aviation to make the world a smaller place.

Within the annals of aerospace history, these particular times will be remembered as a golden era for attacking and solving industrial challenges on a global scale.

Our innovation will ultimately be judged by the efficiency of our products, the breadth of our influence and our footprint on the environment. That is, how ecologically and economically we can manufacture our aircraft will be as important as how many we can put out there.

In only 25 years from now, the future will look as different as it did 25 years ago when I started my working career. In 1993, the transition from paper and drafting tables to the digital world had begun in earnest; huge improvements were expected when computing excellence was measured in kilobytes and megabytes. The production system was developed and optimized with industrial engineering effort that happened on paper and with sheer human effort. It was a time when discrete event simulation and flow modeling were only a dream.

Today, we carry at least one or several versions of a supercomputer around with us and can communicate and execute on ideas as soon as we decide to.

Looking further into the future, Boeing will be one of a few industrial champions to survive low odds to still exist at 150 years old. We will have figured out how to marshal the efforts of larger teams of people to solve bigger problems, doing so with complex system modeling, artificial intelligence algorithms and big data techniques.

The industry will be much advanced from today—for example, we can expect the large technology gaps in propulsion systems to be filled with efficient and powerful engines, enabling space travel on a large scale.

We will be reaping huge automation benefits for completely breaking our 1960s aerospace design paradigms. Automation will have changed how white collar work is performed, freeing engineers’ time to creatively attack problems or leverage artificial intelligence algorithms to accelerate change.

The future is indeed bright for industrial engineering roles, including production and systems engineering, human factors and safety engineering, and management science. How all of these disciplines link together to effectively operate a system that builds real things—really sophisticated things, like airplanes, spacecraft and drones—is significant. There are so many exciting new avenues to solve problems between designing and building both in today’s context and where we will be in our bright future.

Machine learning will be ubiquitous and data management will inform increasingly rapid improvements. The data we collect spans the entire electromagnetic spectrum and five human senses, measuring and signaling the right data at the right time. We will have a production system model that can process data instantly and proactively inform leaders at all stages of a product life cycle what are the right decisions to make. Our factories across the globe will be larger, smarter, more efficient and centered around human achievement.

Along this journey, production engineers at Boeing will do amazing things, making it a magnet for fresh and ambitious talent from around the world. Engineers will have moved us from the static production system capability of today to tomorrow’s complex adaptive systems that are resilient to changing conditions.

Of course, to unlock this exciting future it will take the vision and energy of a multitude of talented people from around the world who are not even in the company today; some of the biggest future contributors are not yet born.

The ability of new engineers to build on the shoulders of the previous generation will continue to accelerate. Future engineers will thus achieve great things and in turn have a larger influence on their world.