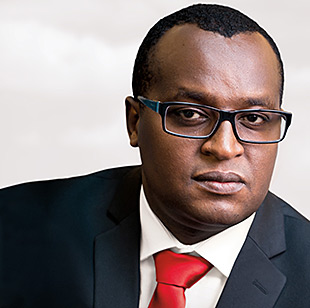 With a passion to learn and eagerness to work hard, a talent emerges from the other side of the world.

George Ndayizeye was only 12 years old when machete-wielding tribesmen attacked his boarding school in Burundi. He hid in the clergy living quarters overnight until military troops intervened, blocked the surrounding roads, and scattered the intruders.

He didn’t feel out of danger until he was airlifted from Gitega to Bujumbura by the United Nations—his first airplane flight.

“I almost died,” he recalled of that time in East Africa in 1993. “There was no communication. My parents thought I was killed.”

But “out of danger” did not yet equate to “safe.” Violence continued in the region throughout the 1990s.

Later, using a student visa, he joined an older brother and sister who had migrated to Charlotte, North Carolina. He applied for asylum once he arrived in the United States in 2001, and it took a year of Ndayizeye explaining his situation before authorities allowed him to stay.

Today, Ndayizeye finds normalcy in Washington state, on the other side of the world from his native Burundi. As a structural analysis engineer for Boeing, he works on the 777X program, on a new joint that connects the forward fuselage to mid-fuselage of the twin-aisle jetliner. He performs static and fatigue analysis, and supports the design team. He says he feels at home there.

“America is so open-minded,” he said. “You can come in with new ideas and make a product. You are as limited as the sky. You are part of a team and it’s diverse—and it’s very safe.”

Ndayizeye rises at 4:30 a.m. and exercises in a gym. He has breakfast and is at work by 7. With increased responsibilities, he interacts with several teams as they ready the 777X for the marketplace. The management team recognized him for his key contributions on enhancements made to 777X floor-frame loads. He was previously singled out for his work on a 787-9 wing-to-body faring design that helped it come in ahead of schedule and budget. And he was recently awarded with a Black Engineer of The Year–Science Spectrum Trailblazer Award.

Mark Clayton, deputy chief engineer for 777X fuselage integrated product team, was one of Ndayizeye’s first managers and mentors at Boeing. Working together on the 787 program, Clayton recalls a young engineer who was willing to do whatever was necessary to fit in with his unfamiliar surroundings.

For example, Ndayizeye took a class on public speaking simply to be able to communicate better with others on the job. Approached by Boeing for his perspective on African market possibilities, the engineer sat down and wrote a detailed paper on opportunities in the region, Clayton said.

“What I thought was impressive about him was how he approached work, especially with English as a second language,” Clayton said. “He faced some unique challenges, like transitioning from telecommunications to commercial airplane structures. I noted his willingness to always self-improve, to always learn.”

Stability for Ndayizeye extends well beyond his employment. He married a Burundi woman he happened to meet in Texas. He gained American citizenship in 2014. He became a father.

And, with the help of Boeing’s Learning Together Program, he is finishing a master’s degree in aerospace engineering from the University of Washington, with a concentration on composite materials.

“I used to see airplanes passing by and wonder, ‘how does that work?’” he said.

His journey from East Africa to Boeing’s largest production site was a long and determined one, requiring equal amounts courage and patience. He proved to be an excellent student, drawn to math and science, and he took as many extra courses as he could at whatever school he was privileged to attend.

Yet, Ndayizeye realized early on that teaching likely was the highest profession he would attain in his country, which remains one of the poorest worldwide. He wanted more in a career, though the budding engineer didn’t necessarily know he would wind up in aerospace.

Raised in the East African countryside, Ndayizeye tended cows, up to 20 at a time. Armed with a stick and youthful resolve, he gently steered these animals to grassy areas and water during the day, and he repeated the process when the sun went down. This was his childhood until he moved to a city where his parents prospered in business.

Ndayizeye grew up in Burundi’s southernmost province of Makamba, in a dwelling without electricity or running water. While it remains a sleepy rural setting in many ways, his homeland for decades has been immersed in civil war—and it forced him to flee.

The long-running strife between Burundi’s Hutu and Tutsi tribes—Ndayizeye belongs to the latter—finally proved too unsettling for him. The boarding school terror was unforgettable.

“War was still going on in Burundi,” he said. “There was no way I was going back.”

Once in the states, Ndayizeye, who speaks English, French, Swahili and Kirundi, moved from community college to the University of North Carolina at Charlotte, impressing people with his scholastic dedication and productivity.

He became an undergraduate research assistant, working with professors and graduate students on bioengineering research projects, with whom he shared citations. His determination to succeed was his biggest attribute, said Robin Coger, former UNCC mechanical engineering professor and dean of the college of engineering at the North Carolina A&T State University.

“Is he a great story in overcoming adversity? Absolutely,” Coger said. “But he’s also a great story because he wanted something, and he was willing to work for it. All George needed was a chance.”

At UNCC, Ndayizeye conducted research on liver cells and how they could be used to mimic an organ transplant—both in simulating death and in their revival—while he held down an outside job to pay for his education. Some of his research data is still in use, according to Charles Lee, director for the Center for Biomedical Engineering and Science at UNCC.

“I applaud him because I knew what he did while he was here: He would put in a seven- to eight-hour day in my lab and then go to work to earn money during the summer. It’s rare to have such a motivated and devoted student,” Lee said.

After graduating with a mechanical engineering degree from UNCC, Ndayizeye received an internship from Corning, in Hickory, North Carolina, and a short time later, he accepted a full-time job at the company’s manufacturing plant in nearby Winston-Salem. He helped develop a new fiber-optic cable used for communications. Challenged to come up with ideas for preventing underground water seepage inside the cable, he solved the problem quickly on a whiteboard, and shares in patents and patent applications by Corning Cable Systems.

The aviation world soon beckoned Ndayizeye. In 2008, he attended a week-long National Society of Black Engineers convention in Orlando, where Boeing had a job fair booth. Ndayizeye randomly stopped and asked about a design job.

He was interviewed on the spot by company recruiters who subsequently recommended that he would be good fit for structural analysis. They asked if he would be willing to move to the Seattle area. Two weeks later, he received a Boeing job offer in the mail. It all happened so fast.

“I knew Boeing, but I didn’t know I would ever work for Boeing,” he said.

George Parker, a Technical Fellow who leads Boeing’s chemistry and failure analysis and testing division, met Ndayizeye at an engineering conference and has mentored him for more than a year now. He has encouraged the engineer to keep advancing through the company, and to pursue the Technical Fellowship.

Ndayizeye has found many benefits to life in America. Some are very basic, but reassuring. For example, he sees how people are able to band together and create and produce commodities, like Boeing does in building airplanes.

According to the 2017 World Happiness Report published annually by the United Nations, the Republic of Burundi was ranked 154, second from last on the list. The United States is ranked 14.

Still, Ndayizeye said he misses Burundi at times, especially the culture. To stay connected to his roots, he mentors young children in his native country, sharing his success through recorded messages. He encourages fellow Africans to follow his lead, to consider life-changing alternatives.

“It’s a matter of having a vision and sticking to it, and he’s a man of perseverance,” Parker, his mentor, added. “He still hasn’t accomplished all of what he’d like to accomplish—but he’s a man on a mission.”