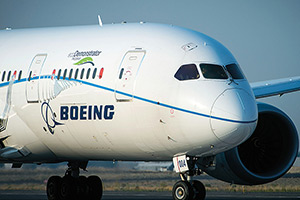 The ecoDemonstrator program was a follow-on to the Boeing Quiet Technology Demonstrator program. Through that earlier program in the early 2000s, Boeing and Rolls Royce developed the quieter engines that became a competitive advantage for the 787 Dreamliner.
Boeing

Boeing and Embraer, the Brazilian-based airplane manufacturer, worked together on the Boeing ecoDemonstrator program late last year to test emerging technologies that will improve the environmental performance and safety of airplanes of the future.

The ecoDemonstrator program is focused on accelerating the testing, refinement and completion of new technologies, methods and materials to improve aviation environmental performance. The program is in its fourth generation involving several airplanes that serve as flying testbeds The most recent testing involved three weeks of technology innovation flight tests in Gavião Peixoto, Brazil, aboard an Embraer E170.

“The ecoDemonstrator program reflects our core belief that ‘learning by doing’ will accelerate the implementation of environmentally progressive technologies into our stream of new products and services,” said Mike Sinnett, vice president of Commercial Airplanes Product Development. “We are on a journey to learn how to efficiently take the best new ideas and transform them into implementable product and service improvements that reduce the environmental footprint of commercial aviation.”

The collaboration between Boeing and Embraer is part of a five-year cooperation agreement signed in 2016. It is part of a broader relationship that began in 2012, when the companies announced they would cooperate in ways to create value for both companies and their customers. This collaboration allows the two companies to combine resources and accelerate technologies that improve the performance and safety of their products. Boeing and Embraer leaders continue to investigate opportunities for advanced technology acceleration on the next ecoDemonstrator program, which is expected to be a 777 aircraft in 2018.

The companies have worked together to improve runway safety and continue to support Embraer’s KC-390 defense aircraft program. Boeing and Embraer also opened a joint center in São José dos Campos, Brazil, in 2015 to coordinate biofuel research with Brazilian universities and other institutions.

“It was an honor for Embraer to conduct this fourth generation of the ecoDemonstrator on an Embraer E170 aircraft,” said Fernando Ranieri, Embraer’s Technology Development vice president. “By doing this program together in a very tight schedule and in a true partnership, engineers of both companies developed mutual respect and admiration.”

One of the most promising technologies tested, he said, is an optical air data system using LIDAR (Light Detection and Ranging). LIDAR technology, which uses lasers, offers the potential to save weight and drag and provide a reliable and separate architecture backup source for air data from pitot tubes. Pitot tubes or inlet probes protrude from the fuselage and measure air speed, atmospheric pressure, external temperature and other parameters.

“Those of us from Embraer and our counterparts at Boeing realize we’ve completed something special,” said Luiz Nerosky, Embraer ecoDemonstrator project manager. “I hope this paves the way for future collaborations.”

The combined Boeing-Embraer team flew more than 15 flights totaling more than 35 flight hours in 2016. These are some technologies demonstrated.

Today’s paints require regular airplane washing and do not provide ice phobic characteristics. This new coating was applied to the nose of the test aircraft and its performance for ice release and the ability to require less washing was evaluated.

The testing for the new ice phobic paint was broken into two focus areas.

Embraer’s focus was to test the application, appearance and in-service durability of the testing. Embraer engineers monitored the application process to understand how the new paint worked in the existing application system, and it was determined that the paint was compatible with their existing paint equipment and hangers. They also measured the appearance of the paint after application. The paint produced an acceptable appearance and passed the testing required by the manufacturer. The test aircraft will continue to fly in Embraer’s test fleet. The paint will be monitored to measure the in-service durability and appearance.

Boeing’s focus was on the lab testing of the paint for rain erosion durability and ice phobic characteristics. Leading edge samples were painted with the new paint product, and then tested in Boeing’s Whirl Arm rain erosion test facility. Engineers examined its ability to meet tough durability requirements for use on aircraft surfaces that face the direct flow of air. The results were mixed and additional future testing will be required.

Small bar test hardware was also painted with the new product and tested at the Anti-icing Materials International Library centrifuge ice test facility in Quebec, Canada. While there were signs of improvement, true ice-phobic paint is still years ahead of us.

New leading-edge slat designs reduce unsteady air flows, which would lower noise for communities as the airplane is on approach. Boeing and Embraer co-led the design for a new slat shape for the E170 prototype aircraft.

Teams of engineers from both companies evaluated new slat shapes for high-lift performance and noise-reduction characteristics. Computational fluid dynamic codes were used to design the shape and predict the amount of noise reduction for the aircraft.

Two configurations were designed, analyzed, built and tested on the prototype aircraft. Initial indications show that the noise due to air flow around the leading edge slat can be reduced by as much as 10 decibels.

Utilizing Light Detection and Ranging (LIDAR) technology, the Boeing and Embraer ecoDemonstrator program demonstrated the ability of lasers to measure air data parameters such as air speed, atmospheric pressure, temperature and others.

Boeing and Embraer worked with an industry supplier to acquire flight hardware to test the ability of LIDAR to measure air data at a variety of flight profile conditions and, more importantly, a variety of atmospheric conditions. The supplier equipment was installed and tested on the ground to investigate the ability to integrate onto a flight test vehicle.

After the system was validated on the ground, the flight demonstrator flew a series of test conditions over several days and weather conditions to record data and compare to the ship system.

Flight tests demonstrated the installation and application of an autonomous Boundary Layer Data Measurement System (BLDS) to measure airflow on a laminar wing or tail surface at commercial aviation flight speeds and altitudes.

Boeing partnered with U.S.-based university experts to develop a flight-test device that could be attached to the external surface of an airplane and, in conjunction with airflow rake instrumentation hardware, measure airflow characteristics at flight speeds and conditions. Embraer provided the flight test vehicle and the predicted airflow characteristics to which the device data could be compared.

The device recorded the data autonomously, which removed the requirement to run flight-test wiring, significantly reducing the cost of flight-test instrumentation. Results of the data show an excellent match to the predicted characteristics and demonstrated that the device could be attached externally (without fasteners) and record data at all commercial aircraft flight conditions.

This device provided low-cost data to improve the efficiency of flight-test data acquisition, resulting in less fuel use and lower emissions.

Boeing and Embraer contracted with a Brazilian company to provide biofuel for all of the flight testing in Brazil. The ecoDemonstrator program used a 10 percent blend of this biofuel made from waste Brazilian sugarcane.

Biofuels reduce lifecycle emissions by 50 to 80 percent when compared to fossil fuels. This demonstration highlighted to the aviation industry that local biofuels are available and can be used to fuel aircraft from any facility.

Boeing has a history of conducting demonstrator projects to test and prove technology readiness for promising innovations. The ecoDemonstrator program was a follow-on to the Boeing Quiet Technology Demonstrator program. Through that earlier program in the early 2000s, Boeing and Rolls Royce developed the quieter engines that became a competitive advantage for the 787 Dreamliner.

The ecoDemonstrator program was introduced in 2012 to support the long-term sustainable growth of aviation. Once proven mature, ecoDemonstrator technologies and processes can be incorporated into existing production models, made available for in-service fleets and applied to new airplane development programs.

The ecoDemonstrator Program formally began in 2011 in cooperation with American Airlines and the FAA. With an inaugural flight in 2012, 15 new technologies were tested on an American Airlines Next-Generation 737-800 airplane.

The world’s first flight using “green diesel,” a sustainable biofuel that is widely available and used in ground transportation, was completed on the ecoDemonstrator 787.

Other technologies tested: touch-screen displays in the flight deck, wireless sensors that can reduce wiring, and outer wing access doors made from recycled 787 carbon fiber.

In March 2015, the ecoDemonstrator 757 took to the skies to evaluate new technologies to improve commercial aviation’s efficiency and reduce noise and carbon emissions. Boeing collaborated with TUI Group and NASA on these 757 tests. Boeing worked with NASA to test active flow control technology to improve airflow over the rudder and maximize its aerodynamic efficiency, and “bug phobic” coatings that can reduce drag from insect residue.The ecoDemonstrator 757 was flown using a 5 percent blend of “green diesel” produced in the United States, to support ongoing industry efforts to approve this biofuel for use in commercial aviation.

Also tested were solar and thermal “energy harvesting” to power electronic dimmable windows, as a way to reduce wiring, weight, fuel use and carbon emissions; and a 3D-printed aisle stand made from excess carbon fiber from 787 production, an example of efforts to repurpose aerospace-grade carbon fiber and reduce airplane weight and factory waste.

Boeing collaborated with Stifel’s aircraft finance division, which owned the airplane, as well as the Aircraft Fleet Recycling Association and an airplane demolition company in Burnsville, Minnesota, to dismantle and recycle the 757 using environmental best practices. Including parts and materials, about 90 percent of the airplane (by weight) was reused or recycled, with 10 percent going to a landfill.