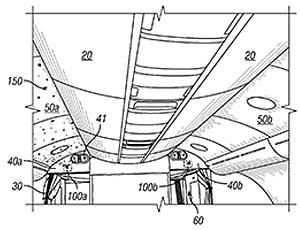 Traditional systems engineering stored data in static documents; MBSE recasts the data as a set of object models, then creates relationships between the individual objects within the model. MBSE’s digitized architecture makes real-time updates accessible by all users and enables virtual system integration and test, reducing development costs, as well as the risk of design problems.

Systems and Methods for Sanitizing a Tray Table

During a typical flight, the tray tables fixed to the backs of airplane seats could become contaminated by spills, food crumbs or other germs from a passenger either using or being near the tray. While cleaning crews do try to clean the entire cabin, there might not be sufficient time to do a thorough cleaning during each flight turnover. In a closed setting, like an airplane cabin, passengers appreciate every effort made to provide a clean environment.
The U.S. Patent and Trademark Office has recently allowed an application, and a patent should be granted in the next few months to Boeing, for a system for sanitizing a tray table using ultraviolet light. Protection for additional aspects of the invention is also being considered. This patent describes a sanitation assembly coupled to the tray table. This sanitation system could be built into the seat or into the tray itself. The process could be done using a sanitation control unit coupled to the UV light source that could be automated or operated manually. The sanitation control unit operates the UV light source to emit the UV light onto the tray table when the table is secured in an upright position, and prevents the UV light source from emitting the UV light when the tray table is not secured in the upright position.

It is becoming increasingly common for aircraft to use LED lighting to create a theme or mood within the cabin. For example, Boeing’s Sky Interior uses LEDs extensively to create a harmonious visual environment for passengers. However, the schemes might be limited, and changing the LED lighting to upgrade to the appearance of starry skies or constellations might require a significant effort.

This patent application proposes using tiny projectors to create moving pictures or unique graphical scenes on the ceiling of a vehicle, like an airplane. Projectors could be positioned adjacent to the ceiling, such as at the top front panel of a cabin, near the tops of curtain assemblies, or between side overhead bins. The projectors could be the size of pico-projectors or micro-projectors. The system may include a control panel that controls the operation of the projectors in conjunction with an onboard sound system, if any.

Air pollution is a significant problem for many cities. Pollution in the air today could include noxious gases, liquids and particulates, or conditions involving all of them, like smog. While current solutions for reducing air pollution mainly include minimizing sources of pollutants, these methods don’t address removal of the pollutants already in the atmosphere. Air pollution, like smog, can sometimes stick around for a long time until natural weather phenomena move the pollutants.

This patent granted to Boeing in January, discusses attaching a bank of air filters to an aircraft that would sweep the sky to remove pollutants. The air filter bank may include a housing with an air intake at a forward end and an air exit aft. The air filter may be configured to remove pollutants entrained in a volume of air entering the air intake and impinging on the filter surfaces prior to exiting the air exit.

The patent doesn’t specify the exact type of air vehicle used, but suggests that it could be a fleet of solar-powered or otherwise environmentally sustainable, unmanned aircraft flying in formation to clear the air of pollution. Such pollution might be trapped under inversion layers above cities, over industrial operations, surrounding forest fires or around volcanic activity.

There is a retinal photoreceptor in eyes called “melanopsin” that detects light and uses it to help regulate melatonin production, which is involved in initiating the sleep cycle in humans. Visible light, including wavelengths from approximately 390 nm to approximately 700 nm on the electromagnetic radiation spectrum, is known to have measurable effects on the melanopsin photoreceptors. Additionally, the duration of light exposure, the intensity of light and the time of day of the exposure contributes to the regulation of a person’s circadian rhythm.

The body's natural circadian rhythms, which are partially mediated by local day-night cycles and exposure to light, become disrupted when the day-night cycle at a new location does not match what the body is used to. This effect is circadian desynchrony, part of the effect known colloquially as “jet lag.” It occurs when someone travels across a number of times zones in a period of time that is shorter than the body's ability to acclimate to the destination time zone. People differ in their ability to adapt to this change, but on average, if a person has rapidly travelled across three time zones, it will take approximately three days before that person's circadian rhythm readjusts to the new light cycle.

Boeing has a patent on technology that provides a customized ambient lighting environment for travelers that can be automated or manually adjusted for the provision of light that closely simulates the ambient light exposure in a desired time zone. The lighting may be adjusted such that it emits specific wavelengths at appropriate times to provide the user's body with the experience of light exposure in the desired time zone.

Almost everyone wants a window seat. On an airplane, the views can be spectacular; so, airplane cabins are designed with this desire in mind.  However, airplane windows have always been somewhat limited in size mainly because of structural constraints.
Through a recently published patent application, Boeing has invented a system to implement panoramic views within existing aircraft designs. The airplane cabin enhanced viewing system uses cameras, flat panel displays and window plugs in place of transparent windows.
Display screens would be configured to fit into the existing window spaces of an airplane model, and would include a camera positioned to capture video outside of the aircraft. The camera and screen are connected to a processor to display the captured video, and could include controls to manipulate the operation of the camera and display—to pan and zoom, for example. More than one camera and more than one display screen could be connected to the processor, which could combine the captured videos to create a single panoramic view on a single display or multiple displays.