Skywriting to the MAX 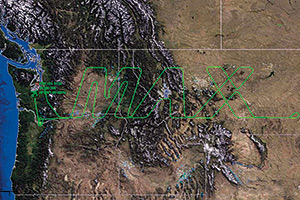 The airplane known as 737 MAX 1A004 had just completed a week of round-the-clock hot and humid testing for extended operations. It was mid-February, and the 737-8 flight test program was nearing the end of its certification schedule. Now the test team faced the challenge of demonstrating the plane’s ability to accomplish a maximum-duration flight.

This particular task calls for a single flight spanning more than nine hours, while also allowing for minimal fuel reserves.

To go nine hours would have been unheard of in the 1980s; historically, the 737 would go six hours and 30 minutes in the air, not including the climb.

But MAX is ready for the challenge. The 737 MAX boasts multiple innovations—including high efficiency wingtips and industry leading CFM International LEAP 1B engines—that provide 50 percent more time in the air than the classic 737.

The Flight Test teams at Boeing have a history of making long duration flights interesting. Both the 787 and 747 teams spelled out the airplane model names using the jets’ flight paths over the continental United States. The drawings show up on flight-tracking software that lay digital lines over a geographic map.

The 737-8 team intended to follow suit and started dreaming up concept art weeks before the 9-hour test flight. Simply tracing out 737 seemed derivative. And flying the Boeing logo had been done before. The airplane needed to act as a pencil drawing continuously across the Northwest sky. The drawing had to be done with a single, well-choreographed motion.

The team settled on something that proved technically feasible, would commemorate the airplane model, and be a nod to the particular test we were flying. The finalist was a hand-drawn flight path spelling out the word MAX in distinct block lettering. This would honor the new 737 MAX model and act as a reminder that Boeing was demonstrating the maximum duration flight capabilities of the jet.

Each section of each letter would be represented by a flight leg with course changes accomplished using latitude and longitude point coordinates. With the concept complete, the next phase was to lay out details for the flight plan.

The hand-drawn letters were replaced by the more familiar Boeing Stratrotype font and a draft MAX template was overlaid navigational sectional charts. The flight was to be further bounded by a working range within the Seattle and Salt Lake Air Route Traffic Control Centers’ airspaces to minimize administrative workload.

Dialing in these variables required calling on the knowledge of the 737 aero performance engineers. This team had been carefully analyzing endurance data from the previous months of testing and ably provided the airplane cruise settings needed for the flight. With cruise settings in-hand, a rescaled flight plan yielded a nominal test time of nine hours with 37 GPS waypoints to connect during the journey.

Further, a keen observer may have noted a long section suspiciously resembling the trailing cones used by the flight test group to measure high accuracy static pressure data. This was to allow for variability during the day of test.

Before going all-in on the plan, the chief test pilot reviewed the full flight plan detailing every minute spent and every pound of fuel burned. With the necessary final coordination between dispatch and air traffic control, the eight-person test crew boarded 737 MAX 1A004 on Feb. 11, at 7:45 a.m. and departed Boeing Field for the nine-hour mission.

Each turn was executed with precision as the airplane slowly spelled out the message online. Lower than forecasted headwinds saw the airplane due to arrive ahead of schedule, which caused the crew to exercise a number of victory laps just north of Portland, Oregon, before returning home.

The airplane landed back in Seattle having been aloft for 9 hours and 13 minutes of continuous flight with ample fuel remaining.

The mission complete, Boeing had yet again proved its airplanes could go the distance.