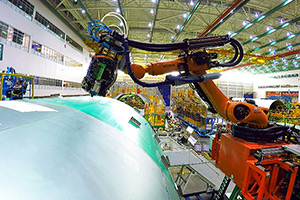 Pioneering efforts in structural durability of aircraft, which saw significant advances in the 1970s and 1980s with the development of comprehensive internal technology standards, continue to evolve at Boeing.

Successes are evident in terms of significant safety improvements and considerable reductions in service actions on airplanes designed since that time. Managing an aging fleet and the adoption of new regulations affecting maintenance planning remain some of the greatest challenges.

New materials—both composite and metallic—and assembly methods are all further shaping the way durability and damage tolerance are being assessed and implemented. The full version of this paper, which can be accessed at www.Boeing.com, reviews the progress made over the past 40 years in the development and application of durability and damage tolerance methods across the Boeing Commercial Airplanes product line.

In that time, durability and damage tolerance (DaDT) have had to keep pace with major developments in materials and manufacturing processes. Composites, for example, saw their first primary structure application at Boeing in the early 1990s on the 777 empennage. Today, they are used on the new Boeing 787 and 777X in areas of the airframe that previously were the exclusive domain of metals.

The most important outcome from the early developments and their evolution is the steady advance in commercial aviation safety that has been achieved since the advent of commercial jet transport in the 1950s. Progress in commercial aviation safety has always been entwined with the evolution of design requirements that are mandated by the regulatory agencies. The introduction of fail-safe design on the Boeing 707, design and testing for durability starting with the model 727, and incorporation of DaDT methods, and more active corrosion prevention and control measures starting with the 757 and 767 airplanes, have all played a role in bringing about a significantly safer, more durable and more economically viable fleet.

One notable success story has to be how Boeing developed supplemental structural inspections in the late 1970s and early 1980s and integrated them into operator-applied maintenance programs, essentially converting fail-safe certified airplanes into damage-tolerant ones. The success of these programs is evidenced in the ever-improving fleet safety record of the commercial airplane fleet, the majority of which consists of Boeing airplanes.

In another major accomplishment, and supporting these developments, Boeing has created industry-leading technology methods and standards that provide a Boeing Commercial Airplanes product-wide uniform approach to design and analysis for fatigue, damage tolerance and corrosion prevention and control (Fig. 3).

The standards capture lessons learned and are periodically updated to incorporate new methods, which can then be adopted in new designs or as design improvements. Furthermore, since their inception, these standards have been built for ease of use both in terms of prerequisite analysis skills and tools, and reliance on a manageable number of variables. Embodied in Book 1, Book 2 and Book 3 (and their composite counterparts), the compendia of these standards are considered living documents that are periodically revised to adopt the latest improvements in analysis, loads, materials, and structural concepts, as well capturing new test and service data as it becomes available.

Initially developed in the early 1970s, and first implemented with the 757 and 767 models, the Boeing durability analysis standard, commonly referred to as “Book 2,” along with its design companion, “Book 1,” were first introduced with the overall objective of assuring a competitive economic life for aircraft structure. This goal was specifically defined as an absence of significant fatigue cracking in the first 20 years of service (defined as a probability of cracking of less than 1 percent with 95 percent confidence), and at least 30 years of service before fatigue related maintenance begins to measurably escalate (defined as a nominal probability of cracking of 5 percent with 95 percent confidence). This meant that the airframe truly remains economically viable for a minimum of 30 years.

Book 1 provides specific design and analysis guidance collected from service and full-scale fatigue test data to help designers and analysts avoid known issues and adopt best practices. Book 2 provides a comprehensive summary of design values for fatigue analysis, as well as the procedures and constituent factors used to determine them.

The introduction of the durability method as well as active corrosion prevention programs has had a dramatic and almost immediate effect on fleet maintenance, as Fig. 6 shows. The 757 and 767 were the first models to take advantage of the Books, resulting in a drastic reduction of maintenance service hours. This trend has continued on newer airplanes, the 737 NG and 777, further enhanced by improvements to the methods and the continuous learning process afforded by fleet observations. This trend is also clearly evidenced in the many full-scale fatigue tests successfully completed since then.

Boeing has a monitored fleet in which events are evaluated using a common damage tolerance methodology, and maintenance programs are adjusted as necessary, while the airplanes are operated out to their 30-year life expectations and beyond. Recent indications from the worldwide commercial airplane fleet are that average airplane ages may be peaking, but much of the current pool remains advanced in age. The size and longevity of the Boeing active commercial fleet (as illustrated by Table I) is a testament to a quality achieved only as a result of decades of development and experience. These statistics are also a reminder of the continuing challenges associated with aging structures and the value of design for durability.

The DaDT methods whose foundations were laid down at Boeing decades ago have continued to prove themselves through service and test experience. As the regulatory environment has evolved and technology has progressed, these methods have had to keep pace or expand into new areas. Although the basic analysis principles employed today are not substantively different from past methods, the tools and processes used have been refined over these past 20 years. Looking ahead, these processes will seek more efficient use of engineering resources, greater accuracy, and incorporate service experience acquired from an ever-expanding fleet:

Although much of the current focus in structural materials development is on composites, metals will continue to play a significant role in many areas of the airframe, and for the foreseeable future, will likely remain the dominant choice in short-haul, high-production-rate airplanes.

Additional efficiencies can be gained by implementing advanced fabrication techniques. For metals, this is especially true for titanium, an impact that is compounded by the rising use of titanium alloys on new airplanes such as the 787. Because of the intrinsic cost of titanium, even a moderate reduction of the buy-to-fly ratio (the ratio of the weight of the raw material used for a component and the weight of the finished component) can lead to significant cost savings. Welding, powder metallurgy and additive manufacturing are among the technologies being explored in pursuit of this goal.

With fuel costs having doubled in the past decade as a percent of total operating costs and the new generation airplanes being able to deliver much improved fuel consumption, lower emissions and lower environmental noise, orders for new and replacement aircraft are expected to grow at an extraordinary pace. The result is that production rates will grow to unprecedented levels.

On the 737 airplane family, the existing wing panel assembly process, which rivets wing skins and stringers while the wing is held in a stationary horizontal position, is being replaced with a new high-precision automated system termed (vertical) PAL (Panel Assembly Line). PAL assembles the panels on a moving line at higher rates and in a vertical attitude, eliminating flow-intensive temporary fastening and overhead crane movement of parts. Qualification of the new PAL assembly system included a comprehensive fatigue test program, the goal of which was to show that for fatigue-critical areas of the wing, the new system meets or exceeds the fatigue performance of the older legacy processes. A similar fatigue test program has recently begun to evaluate and qualify the new 737 Spar Assembly Line (SAL).

On the Boeing 777 program, the focus is on a radically new fuselage one-up assembly process, FAUB, or Fuselage Automated Upright Build (Fig. 39). With FAUB, aluminum major fuselage sections are now built using pre-programmed, guided robot pairs that fasten the panels of the fuselage together with only minimal fixed tooling. Automated drilling operations will eventually install approximately 60,000 fasteners that are today installed by hand. In addition to benefiting production rates, FAUB will improve workplace safety and increase product quality.

One area that has been the object of considerable attention over the past decade has been the development of finite element analysis best practices in their application to both fatigue and damage tolerance assessments. Experience shows that the value and versatility of finite element analysis as an adjunct to DaDT evaluations can only be truly realized when the proper modeling strategy (both the type of analysis and physical model) is tailored to the specifics of the problem and evidence from either test or other previously accepted analyses can be used to validate the results

For composites, some of the greatest current challenges are in NDI (Non-Destructive Inspection), particularly in the application of the technology to large composite surfaces, and in its ability to reliably detect degraded bondlines or interlaminar disbonds. Boeing has been developing NDI methods that put energy into the structure transverse to the critical interfaces, scanning the structure as the energy pulse is applied. This technique has been shown to be capable of finding weak bonds or delaminations that are on the verge of damage nucleation and growth, but it is not yet ready for deployment in the field.

One challenge that is easy to overlook is the industry’s ability to maintain skill continuity in this highly specialized (and sometimes subjective) technical discipline. Although U.S. government projections indicate relatively low (less than 1 percent) annual employment growth rates in aerospace engineering over the next decade, the reality is that the industry is faced with significant turnover due to age demographics, globalization, shifting skill needs and competition from other industries. These are expected to become particularly acute issues in the fields of composite and stress engineering (including fatigue and damage tolerance), systems integration, and manufacturing/production engineering.

Boeing is actively engaged in efforts to maintain an experienced workforce through efforts in training and mentoring. In the DaDT field, training curricula have been developed and are being used across the company’s design centers worldwide. Between 2006 and 2014, nearly 85,000 hours of specialized DaDT training were imparted to engineers supporting Boeing projects.

Many challenges remain, not all of which are purely technical –for example, how experience and past lessons learned are preserved and built upon. Maintaining that continuity in the midst of a major engineering generational transition will be one of our greatest future challenges yet.

Table 1 - Boeing Commercial Airplane usage statistics, based on May 2016 data 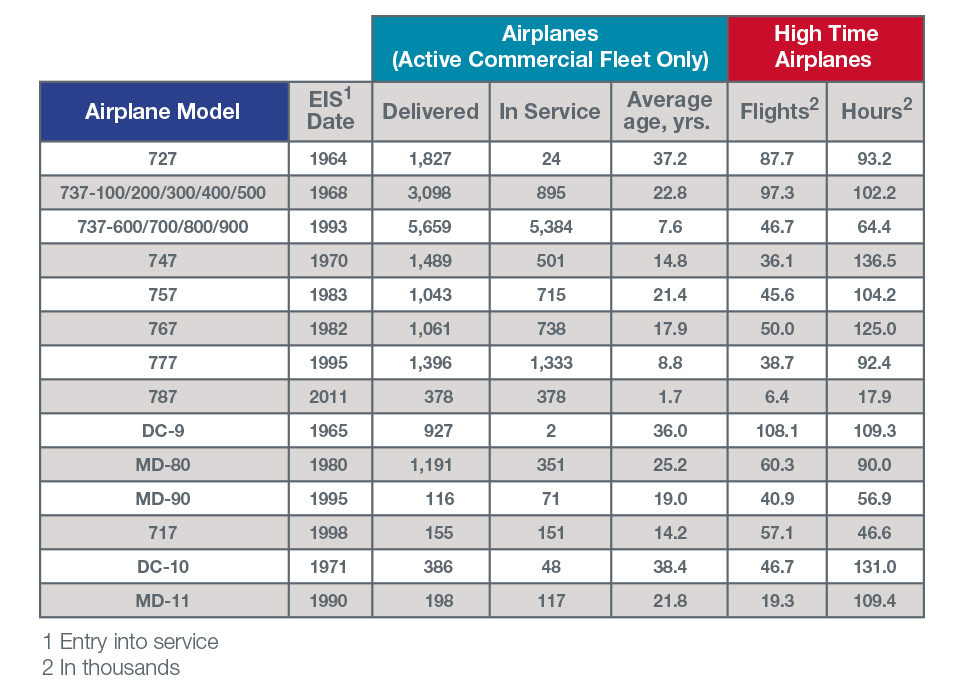 The size and longevity of the Boeing active commercial fleet (as illustrated by Table 1) is a testament to a quality achieved only as a result of decades of development and experience. Source: Boeing 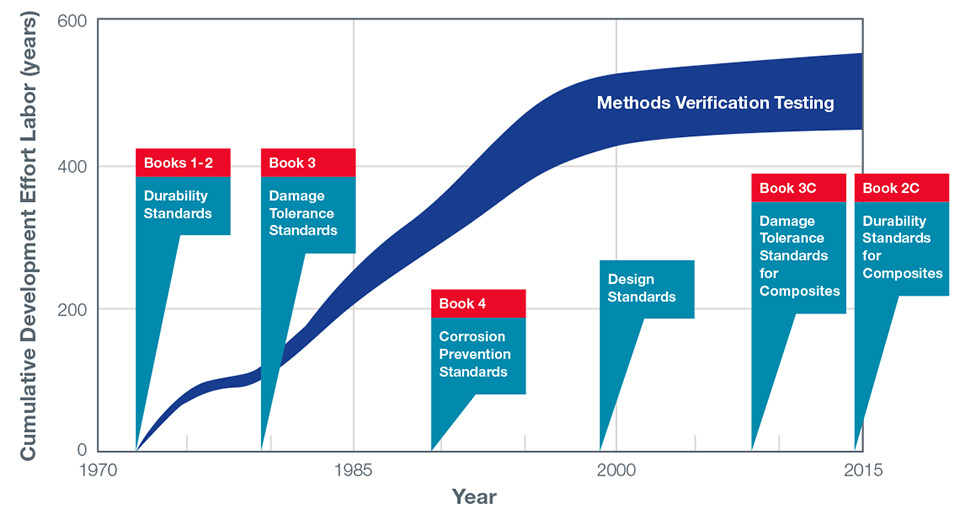 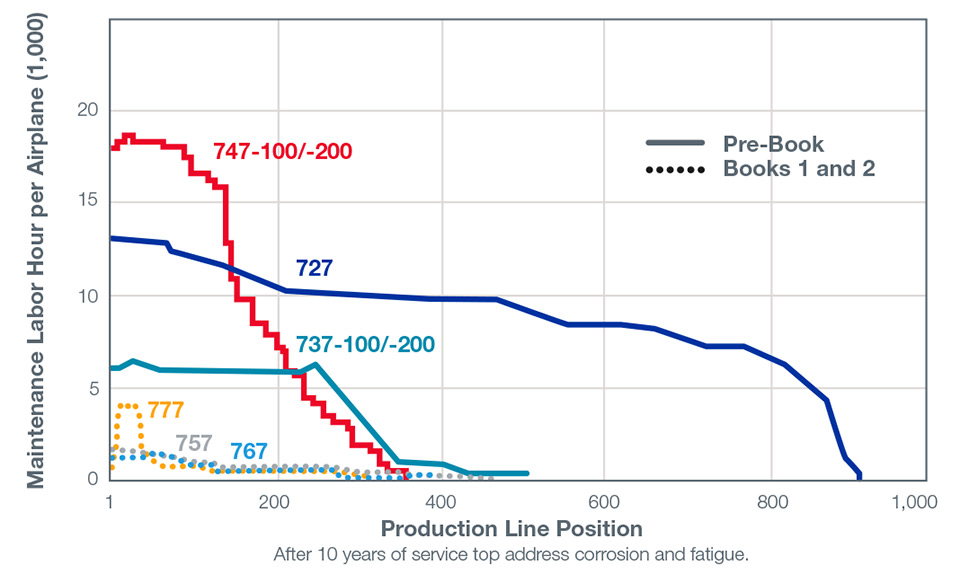