Technology Readiness and the Valley of Death 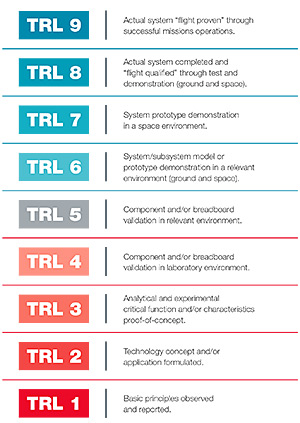 The maturity of technology is commonly measured by Technology Readiness Levels (TRL). A project is evaluated against set parameters for each TRL and is rated based on its progress. There are different standards bodies that define their own TRLs. However, most observe nine levels, with similar concepts. TRL 1 is the lowest and TRL 9 is the highest.

The modern established metric for technology maturity has been the TRL, or “technology readiness level,” which originated at NASA headquarters in 1974 using a scale from 1 to 9.

For many in the research and development community a technology is generally “proven” when it reaches Technology Readiness Level 6, at which point it has achieved “System/subsystem model or prototype demonstration in a relevant environment.” And once proven, there should be no reason why the technology isn't available for use in every relevant application, right?

In reality, there is a colossal distance between being technically proven and having a successful implementation. This difficulty in transitioning a new technology or approach is affectionately referred to as “The Valley of Death.”

In industrial practice, there are many factors threatening the livelihood of technologies that are “ready.”  There is an established Manufacturing Readiness Level (MRL) scale, adopted by the U.S. Department of Defense in 2005, that addresses the feasibility and affordability of producing the technology at the required scale and rate. There are also integration maturity metrics used to assess an Integration Readiness Level (IRL) scale. And both of these contribute to a System Readiness Level (SRL).

While TRL is known and used by most, these other scales are not so common. More often, the term “ilities” refers to the many important attributes of a design, product or system regarding form, fit and function. Among the most often mentioned for complex systems are reliability, availability, maintainability and supportability. For military aircraft, add transportability, and survivability (itself defined as susceptibility and vulnerability). And for everything, add affordability, although not usually included in the technical ilities.

After TRL 6, there is a significant cost to mature the abilities of products and systems so that those seeking to use them can be confident that they will work as advertised. This cost and risk is the first part of the Valley of Death that makes it hard to transition a new technology or approach to real life. Even if the risk is low that a new invention will work as intended, there is still an enormous amount of cost and risk before successful implementation on or as a product.

For example, the Internet of Things—that is everything in our lives using sensors and intelligence, connecting to everything else, and being managed using data analytics—has been just around the corner for quite some time.

Another issue is the basic human philosophy of “if it ain’t broke, don’t fix it.”

Even if a product or system is working inefficiently, most often the user is otherwise satisfied with the fact that it is, indeed, working. The user might not change, even if the change promises to address the inefficiency and offer more. Making a change to a working system means new hardware and software, documentation, training, facilities and support equipment. It means the loss of all the valuable experience and intuition for all the people who use it, and sometimes the need to replace all trusted tools and relevant data. The case for change requires benefits that not only offer better functioning once in place, but so much better that the cost of changeover is warranted.

Sometimes, it’s the customers who are not ready, as in the unsuccessful introduction of Skeelers in-line skates in 1972, and the very successful Rollerblade 15 years later.

Sometimes the technology is nearly there, and the customers are ready, but the regulators are not. Unmanned aircraft are proven extensively in the military, but to date, drone pizza delivery is still limited to New Zealand. Similarly, the advent of urban air taxis is a ways off, according to civil regulators.

As the aerospace industry relies so heavily on the support and approval of these necessary partners—both military qualification and civil certification—I offer that we need to develop and establish a Regulatory Readiness Level (RRL) as another risk measure.

The Valley of Death is wide and deep, and risky to cross. But technologies do make it now and then, sometimes sponsored by the government and sometimes at private investment. Boeing has certainly developed its share of sci-fi-movie-like technologies for which the world was not ready.

But it turns out that merely inventing a solution and proving the technology are not the hardest parts. Being ready in all aspects to traverse the Valley is the real work in innovation.