A virtual environment for the Boeing maritime family of systems

Boeing has designed and operated manned and unmanned deep sea systems since the 1960s. The maritime air, surface and subsurface domains remain important markets for the company. Key examples include:

But it is not only the individual systems that are key to future protection and exploration of the maritime environment. It is the ability to network these systems across operational domains—from seabed to space—in order to achieve a sustainable, resilient and integrated force that will provide the advantage.

“Digital-twin” technologies are being used across Boeing as enablers to support development of next-generation autonomous air systems.

Digital-twin technologies blur the distinctions between the real operational world and the simulated or virtual world, enabling rapid development of new prototypes for platforms and systems in a cost effective manner compared to traditional methods.

A similar capability for the maritime domain was needed in order to provide a low-cost alternative to sea trials, as well as a capability to help model how these different domains interact at a system-of-systems level.

Enter the “Dynamic Ocean,” an advanced modeling and simulation environment for maritime operations, applicable across the Boeing maritime family of system development programs. Dynamic Ocean allows for exploration of how such systems interact, including with other domains (e.g. interoperability with airborne assets), with sufficient modeling fidelity to address real-world operational challenges.

Dynamic Ocean is built on top of a modeling and simulation software platform called Alliance, newly developed by and for a diverse set of technologists from Boeing’s commercial airplanes, services and defense businesses. Alliance is designed as a hierarchical “mission level” simulation, visualization and data analysis software framework. It manages the different levels of fidelity and abstraction needed in order to create complex, networked seabed-to-space scenarios involving air, surface and subsurface units such as P-8A, Wave Glider and Echo Voyager.

Alliance is currently in use across Boeing’s global business units and innovation centers across Australia, India, Saudi Arabia, South Korea and the United Kingdom. It supports engagement and prototyping activities in Boeing’s traditional defense markets, but also in nontraditional sectors such as mining, energy and agriculture.

Given constantly changing oceanographic conditions, and the dominant effect it has on underwater acoustic sensing, a high-fidelity representation of ocean weather is required to address real-world problems. Dynamic Ocean integrates an innovative virtual weather service, developed by Boeing in Australia, which can be used to create realistic and consistent weather environments. The weather service provides:

Led by a team in the United Kingdom, Dynamic Ocean has integrated technologies from the U.K., Australia and the United States, including the Alliance mission-level, LVC (live, virtual and constructive) simulation software platform in order to provide the necessary tools to enable Boeing technologists to analyze seabed-to-space operational scenarios in a virtual environment. 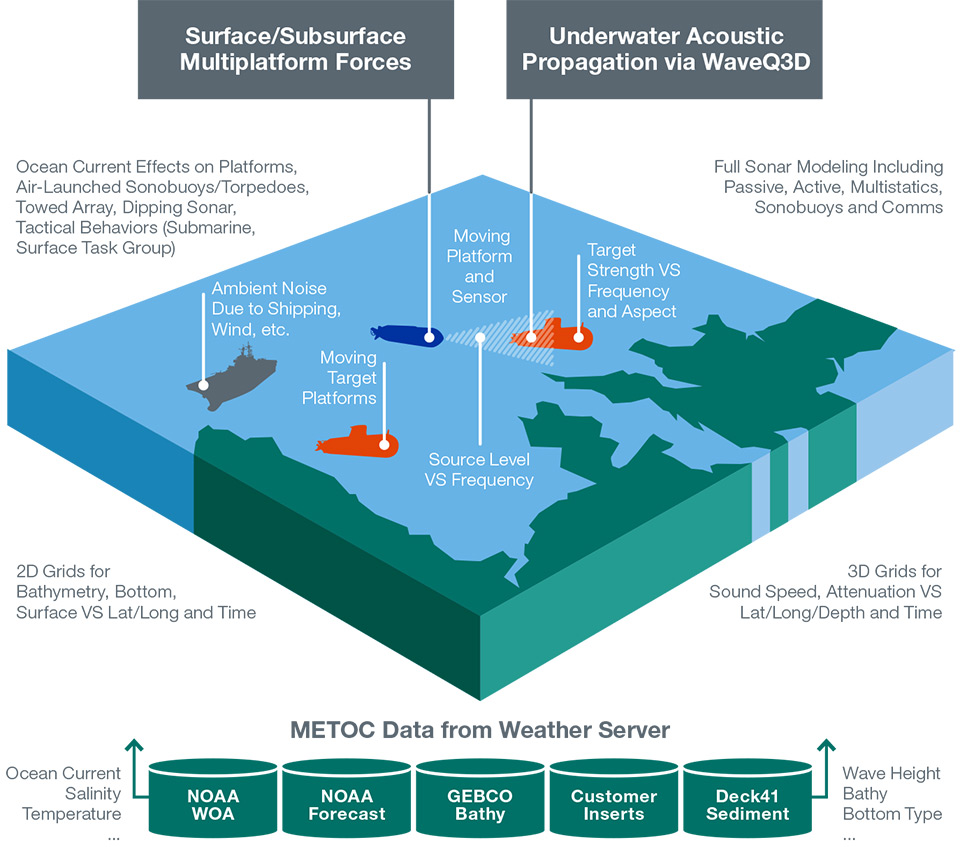