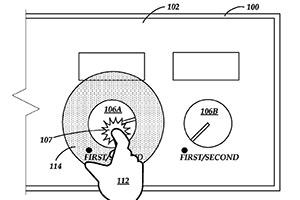 Check out a few of Boeing’s latest ideas and technical breakthroughs recently granted or published by the U.S. Patent and Trademark Office.

This recently issued Boeing patent describes an air vehicle that has an active flow control system that controls air vehicle motion during transonic flight by controlling airflow through orifices in the airfoil to alter the strength and location of shock waves.

Such a system mitigates the need for typical hinged control surfaces, the use of heavy hydraulic/pneumatic actuators and the associated under-surface plumbing, thus resulting in a reduction of wing/vehicle weight and mechanical complexity.

A laser pointer can generate a focused, high power laser beam that when directed at the glass of a flying airplane can distract the pilot. The easy availability of commercial laser pointers makes this a risk to aircraft safety. Specialized sunglasses or tinted windows may alleviate the impact of a directed laser beam, but also could restrict the pilot’s vision.

This newly granted Boeing patent proposes a method for making a shielding assembly that describes how to manipulate the coating on the surface of an object to create unique specialized coatings that absorb a specific frequency—such as the frequencies currently used by commercial laser pointers—and then emanates that energy at another frequency.

The shielding assembly may include a transparent substrate layer and transparent active layers positioned with respect to the substrate. The active layers are configured to absorb electromagnetic radiation having a first wavelength and to emit electromagnetic radiation having a second wavelength—one that is in the near infrared spectrum, which is invisible to the naked eye. Thus, the shielding assembly could transform light energy that may interfere with visibility into light energy that does not interfere with visibility.

Nobody likes sitting in a hot airplane while waiting at the gate. Personal air outlets help cool off the parts of the body exposed to air but cannot reach the parts of the passenger resting on the seat.

A new generation of lightweight passenger seats uses a mesh fabric material or webbing instead of solid cushions. If the pores of this mesh material are left open, a welcome ventilation results that provides a cooler sensation along a passenger’s back and thighs. However, such ventilation can become uncomfortably cold once the plane is at altitude. As such, the current practice is to cover the seat face with leather, which makes for a more comfortable ride at altitude but eliminates the advantage the uncovered mesh seat has for hot-day ground conditions.

This Boeing patent describes a seat that adjusts to provide thermal comfort in hot and cold conditions as needed. The seat contains at least one device (placed, for instance, under the seat and/or behind the seat) that can be actuated to open and close the ventilation depending on the needs of the passenger.

Current practices, such as sliding a finger linearly along a two-dimensional touchscreen surface, do not accurately simulate the physical rotation of a three-dimensional knob. Additionally, the location of the slider may not be the same location as the virtual knob and may divert the attention of the operator who may need to look down to locate the slider after selecting the virtual knob on the touchscreen.

Boeing recently received a patent that describes a method for an operator of a touchscreen to turn a virtual knob in a more realistic and accurate way. When the operator taps the virtual knob, a touch-sensitive ring appears around, and acts as an extension of, the virtual knob. This extended ring allows the operator to rotate a finger around the ring and to adjust the knob’s “position,” thus more accurately simulating turning of a three-dimensional knob.

Implementing ergonomic solutions to improve employee comfort, productivity, health and safety requires analysis of the most current and complete data related to a specific task or environment. This is particularly true for those jobs that require physical movement, including repetitive tasks that could lead to physical discomfort and impairment for the employee. Traditional methods for gathering data related to ergonomics has been time-consuming and reliant on historical, and sometimes subjective, information.

This new Boeing patent describes a method for using wearable computing units that gather acceleration data in real time, or at periodic intervals. The wearable unit would be attached to a person to monitor and collect data associated with movements of a person’s joints (e.g. wrist, elbow, knee), and then to transmit the collected data to the processing center. The data analysis can determine a pattern of task-related movements indicative of ergonomically undesirable conditions for that particular movement or task, thus identifying an ergonomic “hot spot” that can be proactively addressed in real time.

This data analysis can be used by the ergonomist to develop a customizable solution for an individual subject. Additionally, the processing center can compile and analyze aggregate data received from a plurality of subjects, resulting in solutions that may improve the health of a group of people or the overall safety of a particular environment.

In the color images used in common computer systems and cameras, each element has three scalar values of intensity: one each for red, green, and blue wavelengths. In a hyperspectral image, each element has more than three values, sometimes many more. Hyperspectral images provide fine-grained spectral data that can be useful in quality control, agriculture, oceanography, prospecting, pollution tracking, medical diagnostics, and military surveillance.

This recently granted Boeing patent describes a method for capturing images with hyperspectral color resolution with a conventional color camera. The camera (or platform) communicates with a computer, which directs the camera to take multiple images of the same target, orienting the camera to put the target off-center by a different angle for each image. At greater angles, light travels farther through the red, green, or blue filter over each pixel, changing the relative weights of various wavelength bins that contribute to the output of the pixel. The camera sends the image data to the computer, where software inverts a matrix of relative weights to resolve fine-grained spectral bins at selected locations in the scene.

Previous artificial gravity environments required rotation of the entire habitation module, which could be problematic for structural design, load transfer, up-mass and development cost. Rotating the gravity chamber within the module offers potential improvements to crew health. Other improvements include reconfigurations of resting areas where crew may sleep in a horizontal position or sit in a natural posture while working.