The world's biggest eyes on the sky 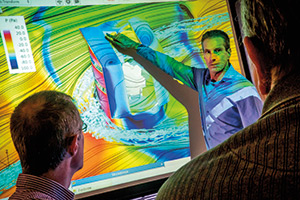 COLORS OF THE WIND
Boeing Technical Fellow John Ladd explains results from a CFD simulation showing the path of air as it hits and flows around the enclosure of the Giant Magellan Telescope.
Photo: Boeing, Tim Reinhart

Engineering the pursuit of astrophysical knowledge and the fundamental question of life.

Boeing engineers specializing in computational fluid dynamics are used to analyzing the aerodynamics of airplanes designed for low drag and high lift.

But they have recently been using their high-performance computing systems and labs in Missouri and California to provide valuable assistance to an international consortium of institutions with dreams of discovering extrasolar planets with the potential for sustaining life.

When operational, the Giant Magellan Telescope should produce images at 10 times the clarity of the orbiting Hubble Space Telescope, potentially answering some of the most inspired and elusive questions in science: How were the first stars and galaxies formed? And where did the chemical elements that make up everything we know come from?

In short, what is the origin of life?

“The Giant Magellan Telescope is going to make new discoveries that will shape human understanding of the cosmos for decades to come,” said Bill Norby, a senior manager working in Boeing Research & Technology, the company’s advanced research organization. “We’re excited to contribute to this multinational scientific endeavor.”

The Giant Magellan Telescope, which will be built at the Las Campanas Observatory in the southern Atacama Desert in Chile, is one of three massive, ground-based telescope projects currently in work. Another one, aptly named the Extremely Large Telescope, is also being sited in the Atacama Desert. The third—the Thirty Meter Telescope—is planned for the summit of Mauna Kea in Hawaii.

The Giant Magellan Telescope Organization (GMTO) was started in 2004 by the Smithsonian, Carnegie Institution, the University of Arizona and Harvard.

Since then, several other project partners have joined. By the time the telescope sees first light, targeted in 2023, it would be the largest known to humankind, until the other two come online.

Because the dry and windy climate at Las Campanas can compromise the quality of images that the telescope will provide, a protective enclosure is being constructed to divert wind around the structure and away from the mirrors. That’s where Boeing comes into play.

Engineers have done extensive work with GMTO using computational fluid dynamics (CFD) to model the flow of wind around the structure and help with design. They are now working on experimental testing of a model of the telescope in the water tunnel to further validate that CFD work.

Similar to how engineers validate aircraft design, the model of the telescope is placed in the water tunnel with built-in dye ports. When the tunnel is turned on, bright streams of colored dye flow around the model, simulating how wind will move around the structure.

“This is a bit outside our usual playing field,” said John Ladd, a Boeing Technical Fellow who worked on the project. “Our typical CFD analysis doesn’t include elements suchas a huge multi-segment mirror (24 meters in diameter) and mountainous terrain with large boulders and low valleys. It was a fun challenge, and the work expanded our capabilities, which benefits Boeing and future customers with similar challenges.” 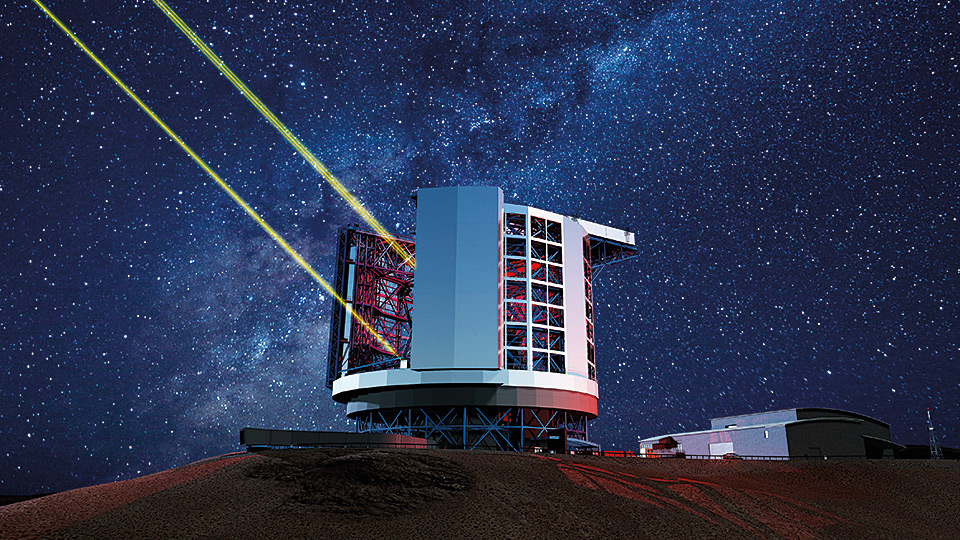