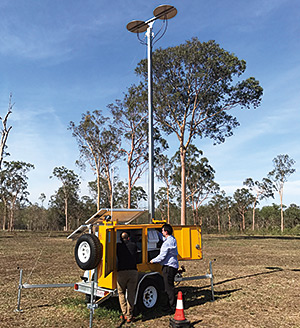 Australia’s progressive airspace regulations and wide-open spaces make it the ideal country to launch the largest autonomous systems development program for Boeing outside the United States.

In working with our customers at the Shell-operated QGC business in Australia, it became clear there was a significant opportunity for more automated capability to increase productivity and safety. Unmanned aerial vehicles (UAVs)—specifically Insitu Commercial’s ScanEagle—presented a solution well suited to the vast and rugged environment of the Surat Basin.

In order to use ScanEagle flights in the field, the Civil Aviation Safety Authority (CASA)—the Australian airspace regulator—needed to ensure the UAVs would be able to detect and avoid local air traffic in manned airspace.

That’s what led to Boeing, with its subsidiary Insitu to partner with the government of Queensland to develop a ground-based system for broad-area, beyond-visual-line-of-sight capability. This system provides a key element of a multilayered safety scheme that allows autonomous vehicles to safely operate while avoiding collisions with other manned and unmanned systems. It enables unmanned aerial system operators at ground-control locations to see real-time information about the local airspace and move beyond their immediate line of sight.

This system provides radar, communications and data correlation to provide a common operating picture, giving CASA the confidence needed to grant the operation of ScanEagles in manned airspace.

Australia has become one of the leading locations for the development of autonomous systems due to its low population density, progressive air regulation by CASA and significant government support. For this program partnership, the Queensland government provided significant research and development funding that enabled Boeing, Insitu and a talented team of local suppliers to develop the system into a solution with benefits to Australia, as well as the larger global market.

We were able to take advantage of that support and the ecosystem to take the technology from idea to export within 18 months—gaining for ourselves, our partners and our customers a significant capability advantage in the rapidly growing and highly competitive marketplace of autonomous systems.

While this timeline may seem fast in the aerospace market, it’s part of our DNA within Boeing, and specifically at Phantom Works International. Our role is working with global customers to rapidly understand their needs and prototype a solution that’s ready for market in a short period. We use modeling and simulation to develop virtual representations of the solutions, then work with governments or industry partners to fund a rapid development program. Building off existing technology and using small, smart suppliers, we build a tight team that develops a solution to meet the need, while ensuring the original cost and schedule targets can be met.

In Australia, Boeing has a software development capability advantage in terms of competency and cost. We also have a customer with a need for autonomous systems at a commercial scale. Working together with our U.S. colleagues, we recognized that this type of need was common and in demand in their market, as well.

We pulled skills and resources from across Boeing on a long-term collaborative roadmap from the beginning. And we developed a flexible system architecture that would allow for adapting the sensor combination on the system. This was a major step toward developing the enabling architecture that could eventually lead to a smoother journey for future passengers.

Based on the early success of this program, Boeing’s recently signed partnership with the government of Queensland marks the largest autonomous systems development program outside the United States.

The development of the system proves the success of this new model of global product development. It also uses our best strengths across the company to partner locally and develop and sustain capability in locations where we have advantage.

I expect to see many more examples to come in the near future.

Shane Arnott is a Boeing Senior Technical Fellow and director of Phantom Works International. He is an international expert in modeling and simulation, and visualization technologies.