Having the customer's point of view 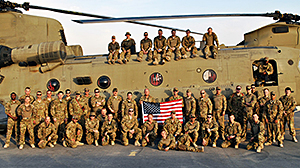 A pilot gives his first-person perspective on operating the aircraft he supports as a Boeing engineer.

When developing or improving our products, it’s important, yet often difficult, to truly understand the customer’s perspective.

But when it comes to the H-47 Chinook helicopter—an aircraft I support as an engineer—that customer is actually me.

I fly the CH-47 Chinook for the Army National Guard and recently returned to work at Boeing after a year of active duty supporting Operation Freedom’s Sentinel in southern Afghanistan.

In flight school, I selected the H-47 as my platform over other airframes because I was already working for Boeing in Philadelphia supporting the Chinook line. I thought seeing both sides of the coin would be fun.

I was actually slotted to be a Black Hawk pilot until I worked a deal to switch over to Chinooks. I’m glad I did; I didn’t know it at the time, but in the coming years I’d learn that the H-47 is by far the most capable and mission-essential vertical lift platform in the U.S. Army inventory.

Nowhere was this more evident to me than in Afghanistan.

I had trained for years within the safety of U.S. airspace and had hours of table talk with more experienced instructor pilots about what systems are available and how to use them. But I never truly learned what the aircraft could do and what actually worked best until I left the training environment and entered the operational theater.

Imagine for a moment that you’re piloting a Chinook in Afghanistan. You’re in a flight of three aircraft, you have 35 to 40 Afghan and American soldiers in the back, and you’re on your way to a confined and dusty landing zone only a few hundred feet from the enemy objective.

There’s no moon, little man-made lighting. Even with night vision goggles, it’s dark and you can barely make out the contour of the mountainous ground.

As you get low on approach to land, you encounter several obstacles on your touchdown point that you weren’t expecting. While reacting, you’re engulfed in a dust cloud and can no longer see anything.

At this point you take enemy contact. Under fire and without good eyes on a place to land, you decide to do a go-around, taking off to come around and try again.

The five different radios you’re listening to go crazy with F/A-18s and AC-130s covering your movements from overhead. They’re trying to understand your course of action. Your flight engineers in the back are calling out what they can see. The ground force commander is looking for an update because half of his force is on the ground, and he needs to know when and where the other half will be able to join the fight.

Turning back inbound, now the valley is completely obliterated in a dust cloud 500 feet high and a mile wide. (Those watching from the video feed at the base would later describe it as looking like an H-bomb had gone off.) And you’re looking at this dust cloud trying to figure out how you’re going to get back in there and complete the mission.

It’s in moments like these, reactive high-stress situations where things are not going as planned—where a pilot truly comes to appreciate the situational awareness and capabilities that the Chinook provides. I ask you to try to visualize this, but it is not possible to fully understand it until you’ve lived it as I and many other Army aviators have.

Dust is extremely dangerous in aviation. With degraded visibility, pilots get disoriented, run into obstacles or land with lateral motion, which causes the aircraft to roll over. The dust was so bad overseas that, after landing, our ramp gunners would often use the infrared pointers on their rifles to help the troops on the ground find the aircraft.

To alleviate this situation, the F model Chinook has advanced flight control and inertial systems that allow the pilots to hover confidently and make controlled landings in a dust cloud even in confined landing zones.

Back to this particular dust cloud, though: We were able to input a prior coordinated alternate landing zone into the system; navigate to it using the moving map and terrain avoidance features of the aircraft; and land safely while maintaining some level of calm, cool and collected decision making—all with brain power left over to communicate our actions to the players involved.

It’s an amazing airframe and has been the workhorse in Afghanistan for over 15 years. The Chinook’s ability to move cargo in high hot conditions was highlighted whenever we flew with Black Hawks. We’d watch those crews load eight passengers and then claim to be right at their max gross weight. Meanwhile, my Chinook would be loaded like a clown car for a half-hour and filled with anything that was needed, including the personal cargo of those eight Black Hawk passengers.

Now how does this experience overlap with my Boeing job? I’ve seen situations where imperfections from the factory have caused issues for us in the field. In the short term, sharing those experiences with colleagues on the floor helps drive home the purpose behind production specs and the importance in understanding and adhering to them.

It’s been a great honor and privilege to be just a small part of this 55-year-old program. And the primary lesson from my experience is long term. When we design and build, it’s important to involve people who have operated our products within their various mission sets. Not just high-ranking decision-makers, but people using our products regularly in the operating environment. Establishing a dialogue and shared understanding with these users can only enhance our products. (We still don’t have cup holders in the cockpit!)