Co-bots in the Land Down Under 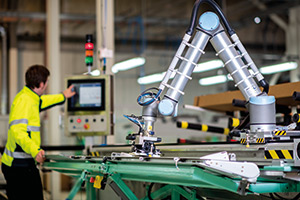 A co-bot at work on an airplane component at a Boeing production facility in Melbourne, Australia.

Where humans and automation work together.

Collaborative robots, or “co-bots” as they are affectionately known, represent an evolution in robot technology.

Co-bots are a new class of lightweight robotic arms that differ from traditional industrial robots in that a co-bot is force-limited and designed to work alongside people.

Collaborative robots therefore challenge the restrictions typically imposed on robots on the factory floor, such as spatial boundaries between human operators and robots. Because collaborative robots can share an overlapping workspace with an operator, they may take up less space than traditional robots and can more easily be incorporated into an existing assembly process.

Since the 2008 establishment of Boeing’s advanced research and development unit in Australia, Boeing researchers have pushed the limits of what collaborative robots might achieve in various facets of industry, including assembly, fabrication and repair.

A recent area of improvement is on the 737 component production system. Integrating new technology like co-bots on an existing system can be a challenge because factory layouts are already configured, operators are experienced and skilled in existing processes, and there is often limited capital available for a system change. Implementing a new robot cell needs to be low cost, cause minimal disruption, and deliver rapid payback of value to an already streamlined production system.

Many 737 components have hundreds of rivets that, upon installation, need machining to a nominal height.  It is time-consuming work that could lead to repetitive strain on human operators. Additionally, there is the risk of damage to the components, as manually-operated shavers can slip, leading to costly rework.

A Universal Robot UR10 was integrated with a small linear track and controlled by customized modular, Boeing-written software. The existing hand shaver tool was attached to the end and the manual process became automated.

The team spent considerable effort designing a system that is lightweight, unobtrusive and contains redundant safety measures, both with respect to the co-bot and the shaver tool that it applies. Furthermore, the team analyzed the robot system for all robot-human contact scenarios. The team simulated contact with the robot and human using pressure sensing technology confirming adherence to the latest ISO 15066 Collaborative Robot standard.

Since the introduction of this low-cost, low-disturbance system last year, this co-bot has saved hundreds of hours of ergonomically difficult labor, demonstrating that robots can be a mechanism to reduce human risk even as they work side-by-side with people. Furthermore, as an unanticipated tangible benefit, machining cutter consumption dropped through efficient manipulation only possible by an automated solution.

This implementation by Boeing in Melbourne represents human-robot collaboration and a vision of the future for factories.