Developing and integrating electromagnets into aircraft assembly systems was a major innovative step in improving assembly processes for manual and semi-automated operations. Within this paper, the design and equipment characteristics are described in some detail, and opportunities for advancing the part clamping methodology with emerging electropermanent magnets is described.

Today’s aircraft assembly involves several methodologies and systems, ranging from conventional manual assembly to mechanized, semi-automated and fully automated systems. What assembly technology is being used depends on type of components, structural configuration, available equipment, investment and the level of innovation created during the development of advanced assembly techniques and systems.

Conventional assembly processes use manual tasks to join parts to small sub-assemblies, and then integrate stepwise multiple sub-assemblies and panels to major components like fuselage and wing structures. Basic processes involved in manual assembly include:

The manual process is very time consuming. Figure 1 “Cleco Clamping” illustrates the behavior of parts during the manual assembly. As can be seen, the drilling is performed in-between two Clecos, and as soon as the first part is drilled, parts spring back—the drill bit continuously applying drilling force to the second part—resulting in a gap between parts. Chips enter the gap, necessitating part disassembly and cleaning, which leads to a two-step assembly process.

Decades ago, aircraft manufacturers motivated suppliers to develop a machine, which could accomplish “one-up-assembly” by clamping pre-assembled parts at the drilling location to avoid gaps between parts, and to eliminate part disassembly and the cleaning process. A variety of C-frame and D-frame machines and systems are available today to perform “one-up-assembly” for rivets or fastener installation, significantly improving process efficiency and reducing time and cost of structural assembly.

Machine part clamping requires two bushings (one on each side of the sub-assembly), and active and re-active clamping forces are carried around the part by the C-frame machine structure (see Figure 1 “C-Frame Clamping”). Because of the force flow around the sub-assembly, only certain types and sizes of structures can be assembled with these machines—for example, single, super and mega fuselage and wing panels, allowing access to both sides of the structure (open structure).

Figures 2 and 3 show fuselage and wing type of structures and assembly levels required to build step-by-step a complete fuselage and wing. The fuselage is built in five assembly steps (single, super/mega panels, half shells, barrels and complete fuselage) and wing is built in four major assembly steps (single panels, spars and ribs, spar/rib grid, and upper and lower panels assembly—creating the box), and integrating wing center box with the left and right wing box. However, if assembly of “closed structures” like fuselage barrels and wing boxes is required, these C-frame machines cannot be used. All assembly operations had to be performed manually.

Innovation and development of new assembly methodologies were required to eliminate manual assembly of “closed structures.” Leading the aircraft industry, we at Boeing invented, developed and implemented semi-automated systems using electromagnets for “closed structures” such as fuselage barrel sections and wing box assemblies. Several patents have been issued, as well.

Instead of C frames to clamp sub-assemblies, we developed electromagnets, generating magnetic flux, penetrating the aluminum or composite structure, pulling a steel block (positioned inside structure) towards the electromagnet, and clamping parts in-between, as depicted in Figure 1 “Electromagnetic Clamping.”

Clamping force at the drilling location can be adjusted to satisfy process requirements by manipulating the voltage of the electromagnet and size of the steel block/plate inside the structure. Principles of clamping force generation with electromagnets and potential applications of this assembly methodology for fuselage and wing box structures are depicted in Figure 4.

For a given structural stack-up (gap), specific electromagnet process parameters must be used (electric current, steel volume) to clamp parts sufficiently, eliminating gaps during the drilling/countersinking and interference fastener insertion. For thin structural stack-ups, low clamping forces will suffice, generated by applying low current to the electromagnet. However, for thick stack-ups, sometimes a magnitude higher clamping forces are required and are generated by applying higher current to the electromagnet.

One potential concept using electromagnets is with flexible assembly systems, whereby the electromagnet is integrated with a Multi-Function-End-Effector (MFEE) moving on the rails positioned on the outside of the fuselage. A mechanic on the inside of the fuselage is handling a gun with a steel block, positioning it opposite of the MFEE to support the generation of clamping force. After a fastener is inserted by the MFEE, the mechanic will install a collar or nut onto the fastener with a hand tool. Similar methodology using flexible assembly systems can be applied to wing box structures.

With emergence of composite materials and innovative aircraft configurations, the assembly technologies have to be adapted to satisfy new process requirements. The 787 wing was the first composite commercial aviation primary structure embracing the advantages of these new materials.

Furthermore, the traditional wing box major assembly methodology at that time was changing from a vertical to horizontal approach for the 787, thereby eliminating large expensive assembly jigs, and replacing them with Determinant Assembly (DA) philosophy. Pre-drilled DA holes during the part fabrication enable pre-assembling and tacking components to create the wing box with minimized tooling. The horizontal assembly technique was also well suited to facilitate one-up assembly processes providing new opportunities for automation.

Today’s competitive aerospace business demands that new automation increase rate, improve quality, reduce cost and improve safety. The Automated Wing Fastener Insertion System fulfills the first two initiatives but comes at a high cost and with safety concessions. If electromagnetic clamping is going to prosper in the future, significant strides will need to be made to overcome these detractors.

For example, an electric coil inside the steel shell of the electromagnet generates heat, necessitating cooling to avoid damage to coil windings and wire installation. For low clamping forces, achieved by applying low current to the coil, heat energy generated can be removed by blowing pressurized air through channels in-between coil windings. However, for maximum clamping force, water cooling is needed to sufficiently extract heat generated by higher electric current.

To address this challenge, Boeing is supporting research at the Massachusetts Institute of Technology with a focus on new innovative concepts to reduce or eliminate the need for electromagnet cooling.

The function of the copper coil is to magnetize and/or de-magnetize the Al Ni Co permanent magnet. Magnetic flux density and corresponding clamping force between electropermanent magnet and steel plate is controlled by the magnitude, direction and sequence of current pulses through the magnetizing coil. To nullify the established magnetic  field of the permanent magnet  and correspondingly minimizing or eliminating clamping force, an electric pulse is applied through the coil in  a reverse direction from the one  used for magnetizing.

With the modulation of the input, current magnitude and direction, and to the sequence of momentary pulses (on the order of milliseconds), the Al Ni Co core material is partially magnetized or de-magnetized.

Once the target clamping force is achieved, no input energy is required to indefinitely maintain the clamping force. Because of very short energy pulses needed to magnetize or de-magnetize the system, no heat is generated eliminating the need for any magnet cooling system.

Also worth mentioning is the  possibility of utilizing alternative magnetic clamping devices, such as trapped-flux superconductors which have already been successfully incorporated into flexible “pogo” tooling fixtures used to hold mandrels while laying-up, curing and trimming composite panels. In the future, this or other alternative methods of generating magnetic fields could be adapted to automated fastening systems to alleviate the need for cooling.

Another future trend will surely be the development of confined-space automation for handling steel backing plates to eliminate the ergonomic and safety issues associated with the current process, as well as non-value-added extra work.

To handle steel backing plates when fastening upper panels (prior to loading lower panel), robots could easily be used. Robots will overcome the gravity challenge (holding the steel plate up during fastening), however clever steel backing plate designs will need to be developed to limit the number of steel plate geometries required. Nevertheless, the automation will require a multitude of plates with quick-disconnect adapters and stored in a tool changer.

A prototype deployable arm robot  that could enter the wing box to position steel backing plates for  AWFIS was tested, but did not prove robust enough for production. However, technological advances in the future should open doors for this type of automation.

By Samuel Dobbs and Branko Sarh 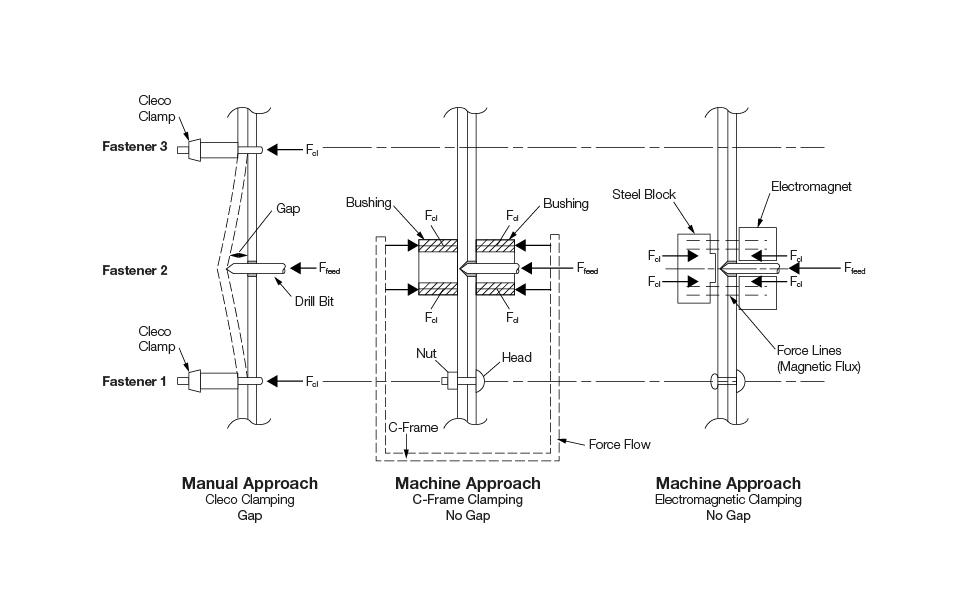 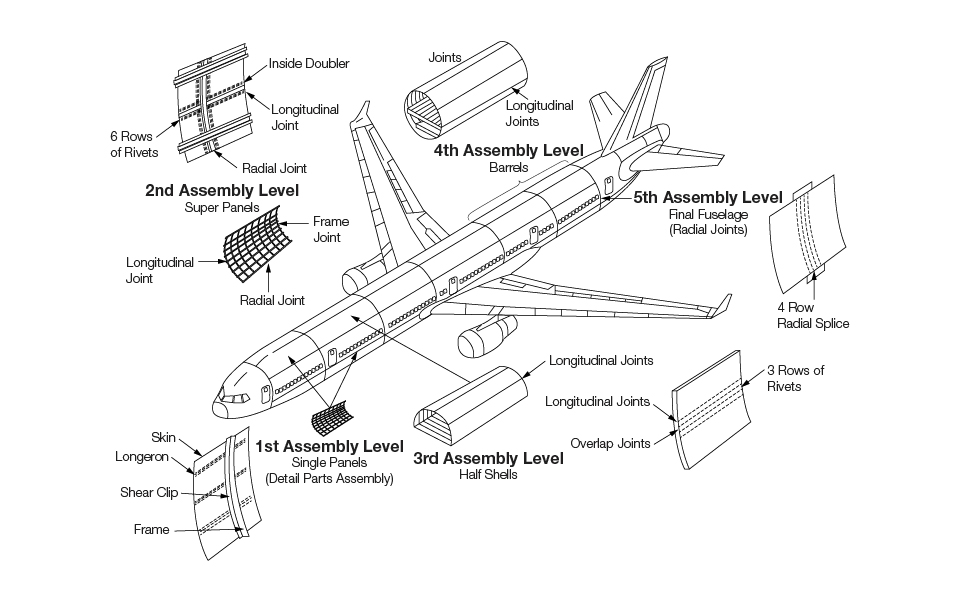 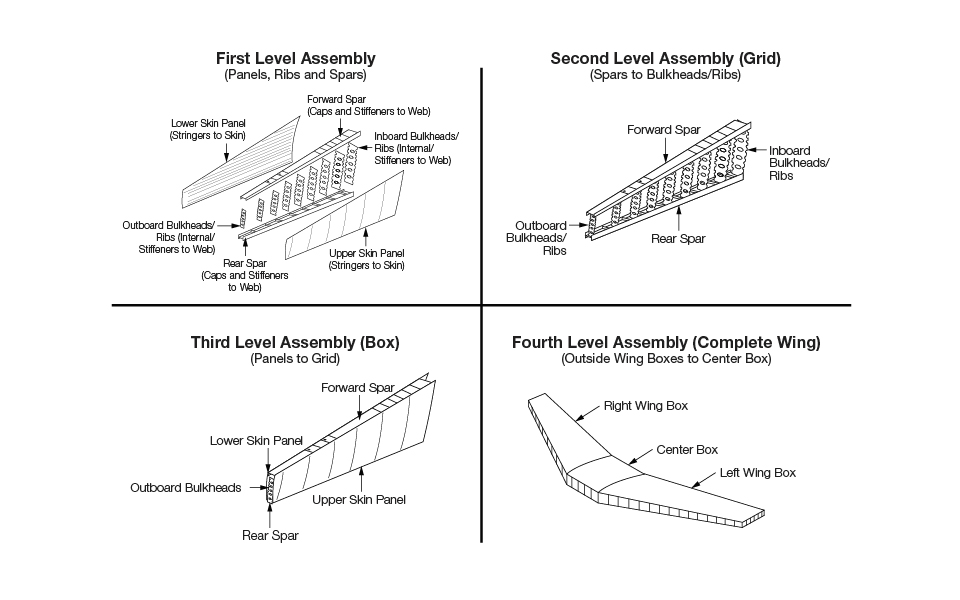 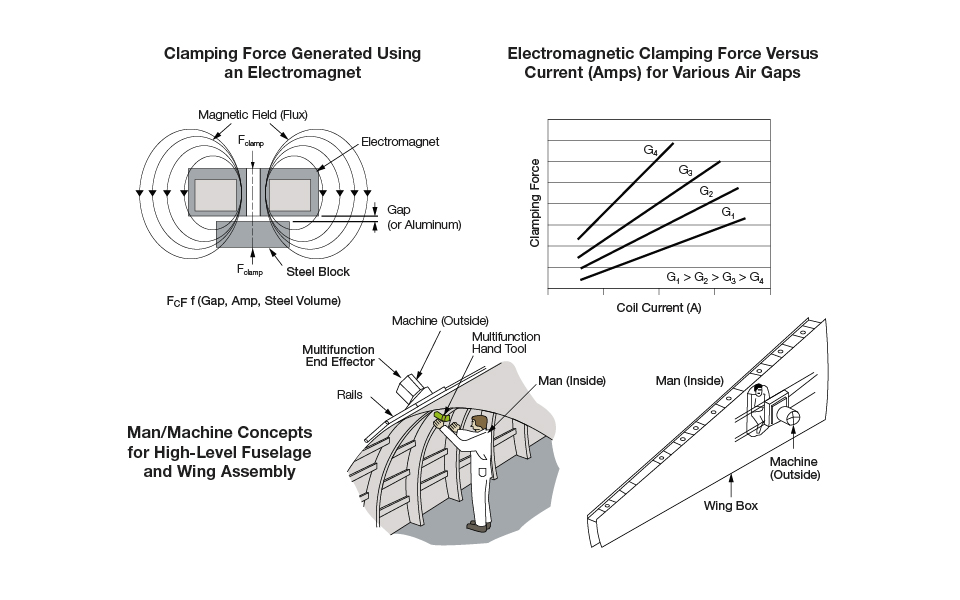