Investigation of Linear Motors as Electric Actuators for Aircraft

Aircraft actuators are either hydraulic, pneumatic or electromechanical in most applications. This paper proposes a novel electric linear motor as a thrust reverser actuator.

Thrust reversers are not new to commercial jet aircraft and were used on the original Boeing 707 nacelles. Over the decades, they have been evolving through a variety of form factors with many patents documenting pneumatic, hydraulic and electric thrust reverser actuation methods, architectures and systems. As discussed in this paper, the concept of using linear electric motors to electromagnetically deploy and stow the thrust reverser is novel and patented by Boeing.

The thrust reverser actuation system (TRAS) is part of the fan duct/thrust reverser assembly located on the aft portion of the nacelle. All current aircraft models at Boeing power the TRAS hydraulically with the aircraft’s main hydraulic system. It is normally activated upon landing by the pilots to assist with slowing the aircraft.

Recently with the Airbus A380 and A350 XWB, these aircraft use an electrically powered actuation system for the thrust reverser, commonly referred to an E-TRAS. These systems operate similarly to the Boeing hydraulic system and mostly contain the same or similar components.

Table 1 compares the individual components of the electromechanical and hydraulic systems with pneumatic and linear motor systems. Note that only the linear motor system offers a dramatic difference in components; the other systems are nearly identical. The switch from a hydraulic to electrical power source is the only significant difference between the two systems. This comparison is important because the reduction of components is usually a benefit to cost, maintenance and weight of a system.

A vast majority of electric actuation technologies used in the aircraft industry to create linear motion are of the electromechanical type. This is where an electric rotary motor turns a transmission that turns a screw or a rack to move a push rod.

That motor takes electrical energy and converts it to kinetic energy in the form of rotational motion, which then must be mechanically converted to linear motion. There are inherent energy friction losses and wear that result from this conversion. A linear motor is often referred to as a direct-drive motor because the electrical energy is converted directly to linear motion without a mechanical transmission, as shown in Figure 5.

Since linear motors operate under the same laws and controls as rotary motors, synchronous, induction and switched reluctance motor technologies are applicable. A key question that this study answered is: Which motor technology would be preferable as a thrust reverser actuator?

Linear motors are complex electrical machines but are mechanically simple with two main parts: the translating mover and stationary stator.

As shown in Figure 6, a mover translates past the stator without making physical contact. The mover

can be simply supported by a slider track or guide rail. Thrust reversers already have sliders and guide tracks, so there is potential to design an integrated motor actuator into the existing structure. This can mean fewer parts to build, install and maintain. The simplicity of the mechanical operation and the lack of a friction drive can directly translate to less wear and tear on the structure over time.

Three different types of linear motor actuators were designed using synchronous, induction and switched reluctance technologies. The designs were analyzed for performance and controllability, and assessed for manufacture and nacelle integration impacts.

The study showed that the double-sided, linear induction motor is an attractive technology. However, with the zero-torque-at-stall issue, an internal permanent magnet/flat linear brushless motor may be a viable alternative for a thrust reverser actuation system. The linear switched reluctance motor technology was ruled out during the study.

The Linear Synchronous Motor was designed by Won-Jong Kim and his grad student, Young Shin Kwon, at Texas A&M University.

Great effort was put into qualitatively evaluating the current state of the art in order to determine the optimum motor architectures to further analyze. Even within the linear synchronous motor design space there are many architecture configurations to choose from, such as a flat or tubular shape, double or single stator, slotted or slotless, and mover core with internal or surface mounted magnets.

As shown in Table 2, the options were narrowed to five different configurations with the most potential to meet the performance and weight requirements, which were then designed, evaluated, and compared:

Of the five synchronous motors analyzed, the configuration with the best thrust force per ampere-to-weight ratio was the double-sided IPM-FLBM where the mover (translating rotor) was sandwiched between two fixed stators. The actuator design is depicted in Figure 9.

The IPM-FLBM actuator controller contained a position and speed controller with independent feedback loops. A simulation was built to input the TRAS load stroke curve as the external disturbance force and measure the response as the motor deployed.

In addition to the design of the motor and controller, a MATLAB program with a graphical user interface was built as a linear motor design tool. The program uses linear equations to predict the performance of the motor in order to save computational time, and those equations are supported by finite element models. With the program, the motor can be redesigned and resized to fit different applications that a user might require. In addition, a parameterized controller simulation was built using Simulink to take a motor design and predict its response with a custom external forcing function such as a TRAS load stroke curve. The external forcing function can also be changed to test the response in different applications.

There is some apprehension regarding whether a permanent magnet actuator would survive in a nacelle environment. The biggest challenges for this motor technology and design would be the reliability, operability and manufacturability. For the permanent magnets specifically, the key reliability concerns are temperature and vibration.

The linear induction motor was designed by Boeing Senior Technical Fellow Robert Atmur and his team. Atmur has extensive experience in designing induction motors and has programmed sizing tools for optimization. The architecture of this motor design in Figure 12 consists of a three-phase AC double-sided linear induction motor, commonly known as DLIM, where the mover is also sandwiched by two fixed stators.

To control the linear induction motor actuator, a novel controller was devised. Technical Fellow Ashwani Chaudhary was responsible for building the controller simulation. The initial electrical simulations showed a stable controllable system was feasible regardless of whether a large or small magnitude step command was input. The resulting simulated actuator was able to deploy in 0.5 seconds, hitting peak velocity of 7 m/s in about 0.1 seconds and spending the remaining 0.4 seconds coming to a controlled stop. In this case, however, due to time constraints a more accurate motor model was unable to be included in the simulation to substantiate the calculated peak electrical loads. During standard operation it was determined that the peak electrical load would be 47 kW; however, a problem was discovered that when the actuator is at stall speeds (zero velocity) the power required would be greater than 141 kW per actuator. This would be a higher load than the aircraft electrical power system can accommodate. A means to provide initial motion would significantly reduce that load.

What makes the DLIM attractive is the actuator simplicity and its thrust-to-weight capability. This actuator design would be fairly easy to integrate with the thrust reverser because it contains no permanent magnets, and the triple thyristor controller is simpler.

In a thrust reverser actuation application, the motor is not in operation for a long enough period of time for heat rejection to be an issue; the temperature rise was calculated to be very small at less than 10 degrees Celsius. The biggest challenge to integration would be the added mechanism needed to provide motion when stalled so as to prevent the unmanageable electrical load. A solenoid or spring could be integrated into the actuator design in order to provide some small impulse when the mover velocity is at zero. Or the sudden high demand could be managed by a bank of capacitors, though initially that solution appears to be heavy, which is not appealing for aircraft applications.

This part of the study analyzed four different architectures of switched reluctance motors. There was a longitudinal-flux tubular (LF-T) LSRM, two longitudinal-flux flat (LF-F) LSRMs with either iron or a mix of iron and nonferrous materials, and a transverse-flux flat (TF-F) LSRM, each qualitatively assessed to have the highest force output compared to other architecture options.

In terms of integration with a thrust reverser on a nacelle, the LSRM configuration, similar to the DLIM, benefits from not containing permanent magnets. Manufacturing of the LSRM would be more costly than the DLIM, since there will be more poles to machine and coils to wind, but still likely cost less than the IPM-FLBM.

To output the required load, however, the TRAS would need six actuators per nacelle, which results in an unacceptable weight. Further, the amount of unsupported length stowed over the fan case would be a problem in a nacelle environment where high vibration loads are common.

Table 3 compares the thrust-to-weight and thrust-to-power ratios of the three studied linear motor actuators, where the DLIM design stands out as the highest performer.

It is important to note that the IPM-FLBM and the DLIM were both able to meet the thrust force needed within the design volume restrictions.

This article recommends further model-based analysis, prototyping and lab testing of the IPM-FLBM and DLIM actuators. Prototypes and tests would validate the design, analysis, control, manufacturability and operability of the actuators to advance their technology readiness level. 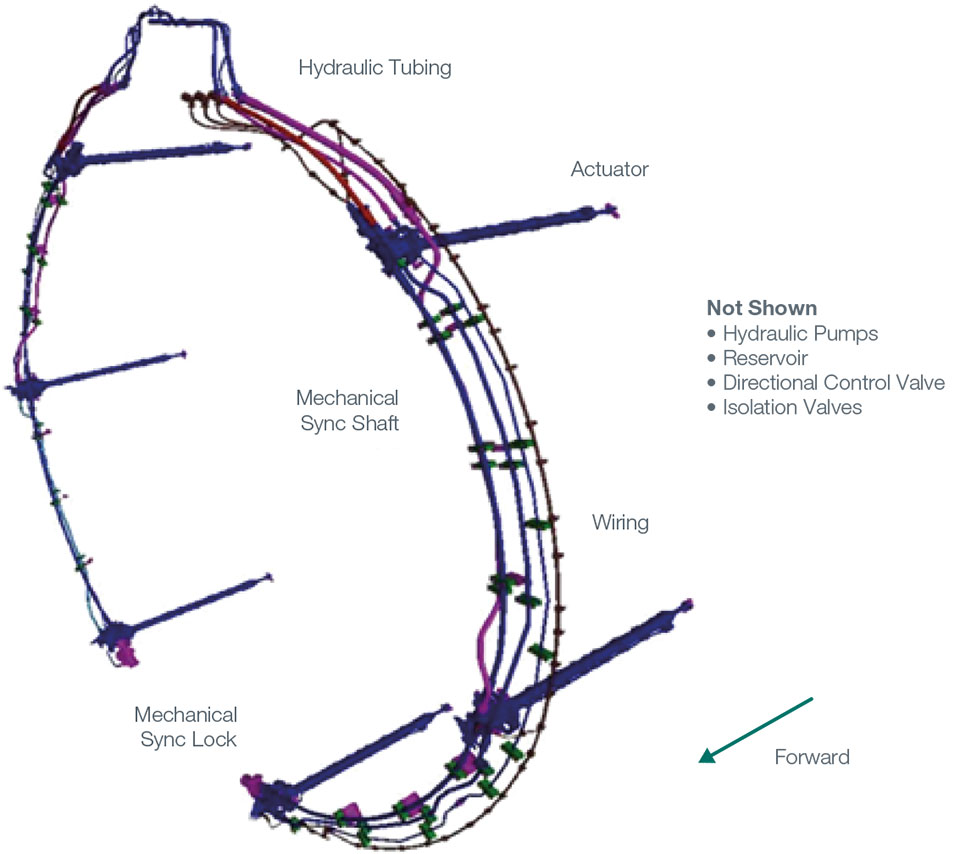 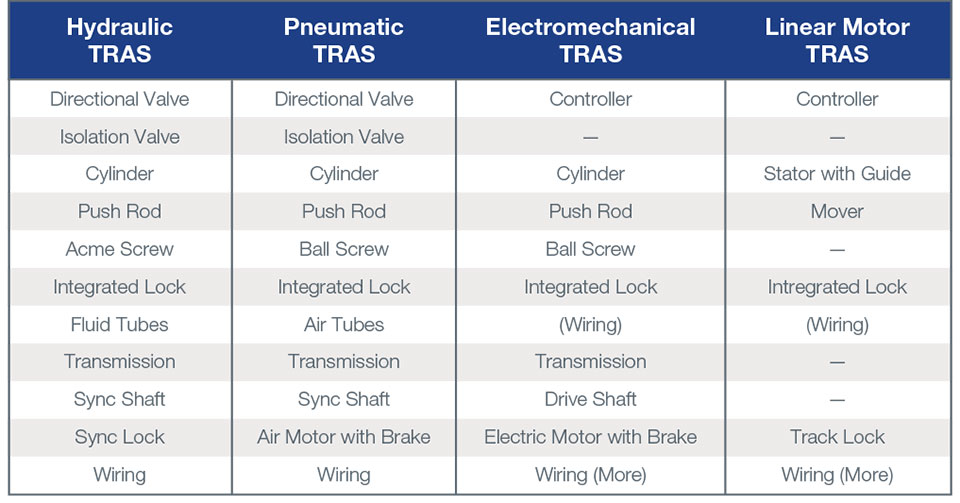 Figure 5 - Comparison between an electromechanical and a linear electromagnetic (direct) drive system. 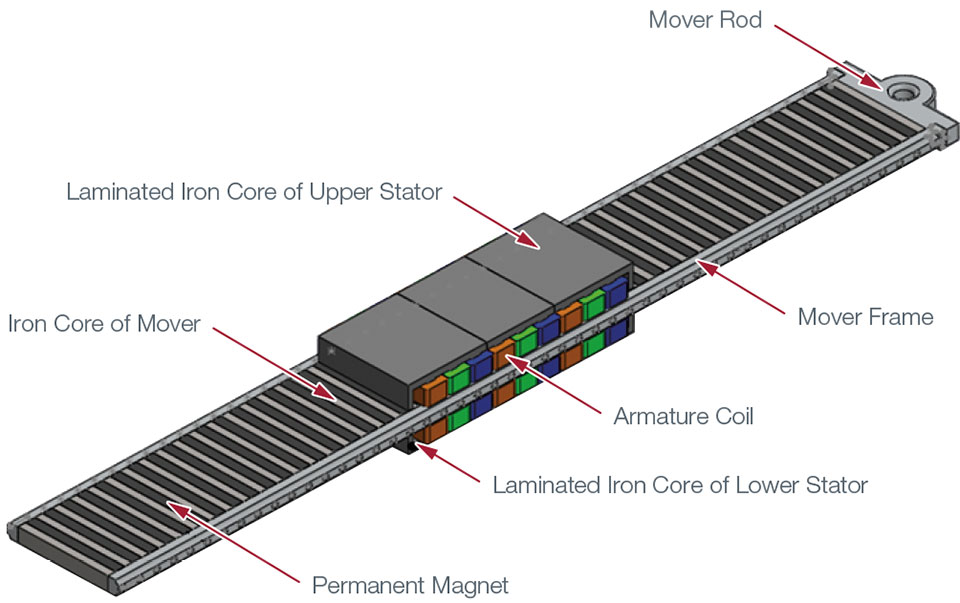