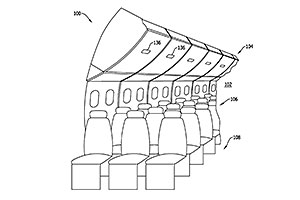 System and Method for Allocating Objects Within Storage Bins.

Efficient aircraft configurations are increasingly important as fuel costs continue to rise. Larger aircraft and aircraft with larger wingspans tend to be more fuel efficient. However, most airports were not designed with adequate space to accommodate modern aircraft with longer wings.

Military and future commercial aircraft both utilize folding wingtips, which allow an aircraft to have a long wingspan while in flight and then have a shorter wingspan when on the ground. Both of these types of aircraft will benefit from a smaller, lighter folding actuator and wing structure, which could be made possible with closed-loop load control.

This patent describes a system configured to limit a force at the wing fold actuator output. Decreasing the loads on the actuator that folds the wingtip allows for a lighter system and structural design, and it increases the time before the actuator requires maintenance. Reduced loads imparted by the system onto the wing structure also prolong the fatigue life of the structure and reduce inspections that need to be performed on the wing structure by an airline.

Because of the folding wingtip, longer-winged aircraft can fly into airports without requiring any gate or runway modifications. This is one of several Boeing patents for folding wingtips, a unique and innovative feature of the upcoming 777X that is expected to enter into service in 2020.

Wireless services are convenient and efficient, and have facilitated communication immensely. However, the openness and exposed nature of wireless networks make them more vulnerable to various types of attack, such as a denial-of-service (DoS) attack. Wireless networks have security protocols, but no system is invulnerable.

An attack detection or mitigation method is needed that can respond to emerging attacks without reliance on protocol security enhancements, which can be costly and prolonged.

A DoS attack happens when an attacker prevents legitimate users from accessing the network, for example,    by bombarding the network with illegitimate traffic, thus interfering with valid wireless transmissions. This patent describes a method for attack detection and mitigation by using antennas in different directions of coverage. An intrusion prevention processor or device would analyze incoming signals and determine individual or aggregate device behavior patterns that indicate if an anomaly has occurred. Attacking signals are then blocked using the antennas in the direction of the anomaly, enabling the remainder of the system to stabilize.

This patent describes an object allocation system and method for determining and monitoring available capacity within overhead storage bins to facilitate the most efficient use of bin space. This system comprises storage bins with motion sensors and a profile sensor that would determine available capacity within the bins. A controller determines the boarding status of the aircraft, activates the sensors, and not only transmits an indication of the availability of space within the first bin but also determines the shape of the luggage already in the bin. Providing the shape of the luggage helps give a rearrangement recommendation among bins to ensure the most efficient use of space. A display device such as an LED light on the outside of the bin indicates fullness.

Such a system enables passengers and flight crews to quickly determine the location of available overhead storage space during boarding. This system could reduce both boarding delays and passenger frustration.

Flight interval management (FIM) refers to the management of the spacing between aircraft in flight. Generally, FIM operation includes the instruction to the pilot to achieve or maintain a desired spacing (in time or distance) from another aircraft.

This recently granted Boeing patent describes a system to provide FIM instructions through a new module in the flight deck. When the module receives input that the subject aircraft is within 30 nautical miles of another relatively spaced aircraft, it generates an output displaying, at minimum, a paired mode of the module with the FIM avionics device, and a commanded speed reported by the FIM avionics device.

This system also includes specific flight safety provisions, which generates a blank screen instead of previously displayed data that might mislead the pilot. The display would message that the connection with the FIM avionics device has been lost.

A sonic boom is awe-inspiring but disruptive. Due to the extreme levels of noise heard on the ground as the result of the sonic boom, FAA regulations currently prohibit any commercial supersonic flight over land. Aircraft are thus required to fly at lower speeds, prolonging travel time.

The sonic boom is actually two booms—one when the initial pressure rise from the nose hits, the other when the tail passes and the pressure suddenly returns to normal. The power of the shock waves is dependent on the quantity of air that is being compressed, accelerated and recompressed and thus is dependent on the size and shape of the aircraft.

A significant noise reduction that results in an acceptable level of noise on the ground could prompt a revision of the regulations that currently prohibit supersonic overland flight.