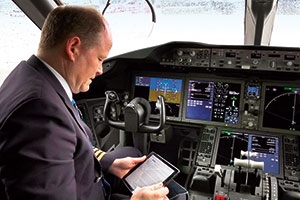 Call it an “easy button” for airline pilots.

The new software saves pilots between three to five minutes on domestic flights and up to 15 minutes for international travel.

“RouteSync saves me somewhere between five and 10 minutes on a long flight,” said Frank Mannaerts, who pilots a 787 Dreamliner for KLM Royal Dutch Airlines. “It just gives me so much more time to interact with the passengers and speed up the boarding process to ensure an on-time departure.”

Developed by Boeing’s advanced research division and commercialized by Boeing Global Services, RouteSync can instantly upload the flight plan route, alternate flight plan and performance data. The software verifies the route between FMS and airline dispatch systems, and it won’t uplink the preflight data if there’s an error in the flight plan.

“This is a highly reliable and accurate runway-to-runway route uplink solution,” said Louis Bailey, a Boeing Associate Technical Fellow and lead engineer. “It also performs route verification and removes and inserts flight plan discontinuities. Insertion of a discontinuity is used to call pilot attention to a critical segment in the flight plan.”

Boeing formed a partnership with KLM Airlines to test the RouteSync service. During a six-week period, it was used to uplink 4,021 flight plans. In total, RouteSync saved KLM pilots between 200 and 335 hours, according to program officials.

“RouteSync provides significant improvements in aircraft connectivity to support flight efficiency applications,” said Jim Hamilton, Boeing’s portfolio manager for flight efficiency solutions. “It has the added benefit of increasing safety by verifying FMS data entered or modified by pilots and ensuring it is consistent with the flight plan.”

KLM Airlines has fully integrated RouteSync on several aircraft types in its fleet, as the service is available for Boeing airplanes and other commercial aircraft.