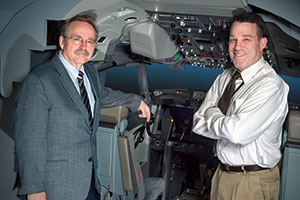 A look at an important—and underappreciated—technology that enables point-to-point air travel.

Ask most commercial aviation experts to list the technological advances that allow airplanes to fly nonstop between new transoceanic pairs of cities, and they’ll probably cite improved engines or the proliferation of advanced materials.

But Boeing engineers Tim Murphy and Brad Cornell know the transoceanic flight boon can also trace its growth to another important technology that has nothing to do with propulsion or materials, and everything to do with computing power.

To prove their point, it helps to envision the world’s most lucrative airspace: the North Atlantic. Unsurprisingly, it’s also one of the busiest with about 3,000 aircraft per day.

Because of the long-duration flights, the North Atlantic corridor was once limited to mostly jumbo jets and some 757s and 767s. But that changed about 15 years ago when Boeing developed Datalink Services, an air traffic control system that allowed more planes to fly in tighter spaces, meaning more direct routes and less fuel consumption.

The result: More twin-engine jets such as the Boeing 737 MAX, 787 Dreamliner and 777 can make those runs and have become the preferred option by airlines in North Atlantic airspace.

That explains why, since the start of this century, Boeing has stood firm in believing that the future of air travel involves creating airplanes that will take passengers where and when they want to go—and doing it nonstop.

“We figured out a way to fly point to point with smaller airplanes, and airlines found it more advantageous,” said Murphy, a Boeing Senior Technical Fellow with 30-plus years of experience in guidance, navigation and control technology.

The implementation and execution of Datalink Services took forward-thinking by Boeing and years of innovative work by hundreds of employees.

To fully grasp the monumental task of transforming air traffic control, let's go back to the radio days.

In international airspace, communications were difficult because of atmospheric interference. This would increase workload and error potential. Boeing realized the limitations of voice communication and knew the method would not serve the company’s global strategy of connecting the world.

With the 747 as its model, Boeing introduced the Future Air Navigation System (FANS) in 1995 in the South Pacific Oceanic Region.

Increased navigation accuracy with the use of GPS and improved communications with Datalink helped put transoceanic planes on their most direct and safest routes, enabling more point-to-point paths in closer proximity.

From there, the Boeing team kept refining the technology until they felt comfortable using it in the densely populated North Atlantic airspace.

“Traditionally, everything was done by voice,” said Cornell, Flight Crew Operations Integration engineer. “Because of that, there were certain limitations allowed in terms of separation standard. Removing the constraints in airspace would allow more point-to-point flights. Air Traffic Control Datalink Services was developed to remove those constraints.”

Murphy draws a comparison between Datalink and Waze, the community-based navigational app for vehicles.

“Think of it as an internet for airplanes,” Murphy said. “It’s even more fundamental for airplanes because it has to tell them where the roads are and which can be used.”

With the FAA on board, the system is now used by about 80 percent of the airplanes flying transoceanic routes and has been implemented in a majority of airports around the United States.

Murphy and Cornell’s team has also been able to replicate Datalink Services from Boeing’s commercial airplanes to several defense programs.

“It was a little tricky, because I think the intention had always been to make this ubiquitous,” Murphy said. “But it was only implemented on the 747-400 at first.”

For their efforts in duplicating Datalink Services across the enterprise, Murphy and Cornell’s team received the 2018 Technical Replication Award, a Boeing employee honor that recognizes the spread of innovation across the company.

Cornell admits that none of this would have been possible if not for the initial leap of faith more than 20 years ago, implementing FANS on the 747.

“When we first put it into service, there were a few problems,” Cornell said. “But we worked together with other stakeholders and solved those problems. Boeing earned a reputation as an industry leader in this technology. Once we got it under control, it replicated organically.”

Murphy admitted it was a bit tenuous at first.

“If not for the success in all phases in the oceanic airspace, we may not have gone down this road,” Murphy said. “Datalink is really the cornerstone to the future of navigation.

“At the end of the day, it’s all about managing the efficiency of the airspace and enabling more airplanes.”