Aviation innovates to connect the world in a cleaner future 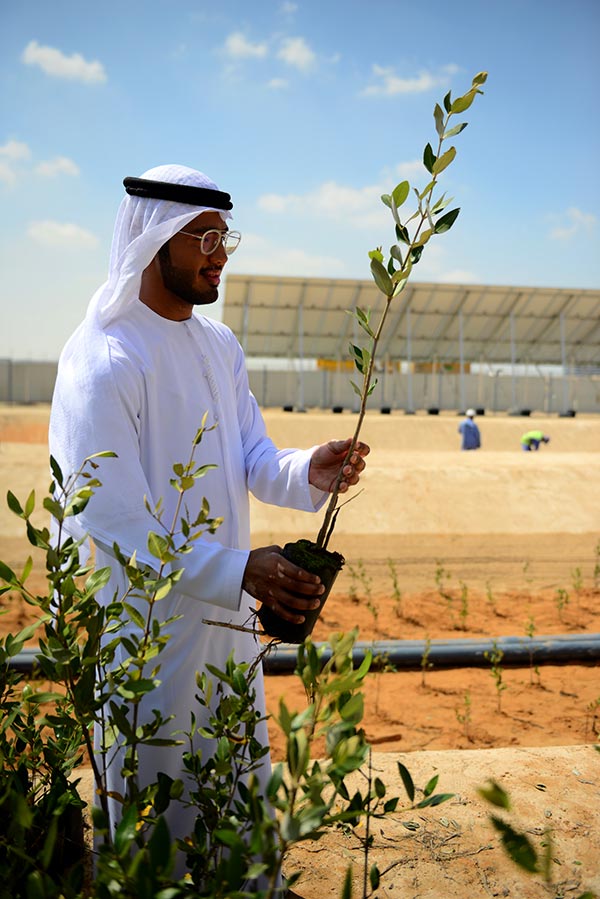 A unique ecosystem is being developed in the United Arab Emirates that will produce sustainable aviation fuel as well as food for a nation that imports nearly 85% of its needs. (Boeing photo)

Over 114,000 airline flights are taking off around the world today, collectively carrying the population of metropolitan Paris.

Those 12 million travellers are flying to conduct business, study abroad, discover new places and people. Flying enables a quarter billion expatriates to pursue new opportunities outside their native country whilst maintaining relationships with family and friends back home.

In short, aviation connects people and goods to make the world a better place.

Efficiency at all altitudes

From its earliest days, aviation has relentlessly improved efficiency to make flying more commercially viable for airlines and attainable for more travellers while minimising its environmental footprint. Today, flying is the safest form of transportation and as efficient as driving a hybrid-electric car in many cases — making it a responsible choice for travellers.

Steady growth is bringing millions more people together and further advancing the world’s economy, but it also poses an environmental challenge.

Commercial aviation accounts for about 2% of global carbon dioxide emissions. Recognising that climate change is serious, the industry is committed to reducing its environmental footprint. We see CO2 as the enemy — not flying — and we are making significant progress.

In 2008, aviation became the world’s first industrial sector to voluntarily set three ambitious environmental goals: improve fuel efficiency 1.5% a year from 2009 to 2020; stop the growth of carbon emissions by 2020; and cut emissions to half of what they were in 2005 by 2050.

We have been exceeding the first target and are on track to meet the second target using an “all of the above” approach that involves five areas:

Technology: Airlines spent €886.4 billion over the past decade buying 12,000 aircraft to modernise their fleets. Each new generation of airplanes is 15% to 25% more efficient than the previous one. Improvements come from new engines, lighter-weight carbon composite airframes and aerodynamic innovations such as natural laminar flow.

Sustainable aviation fuel: SAF reduces emissions by up to 80% over its life cycle and can be blended directly with traditional fuel. In just over a decade, the industry has advanced from the first test flight to completing 180,000 passenger flights powered partly by SAF — a number that grows every day.

Operations: Procedures such as single-engine taxiing and continuous descent approaches are reducing emissions further. Airlines are using data analytics to optimise preflight route planning and to make real-time adjustments in the air as weather and traffic conditions change.

Market-based measure: Every nation in the world adopted the Carbon Offsetting and Reduction Scheme for International Aviation (CORSIA) in 2016. Seventy-eight nations that represent the vast majority of air transport have volunteered to participate in the program’s early phases, before mandatory implementation starts in 2027.

CORSIA will offset nearly 80% of emissions growth from international flights after 2020 — serving as a temporary solution until sustainable fuel is more widely available. Credits will be purchased from qualified carbon-offset providers that finance projects to cut CO2 emissions. Stringent environmental integrity criteria from organisations such as the Roundtable on Sustainable Biomaterials will ensure reductions are real.

Boeing and others are also working on electric and hybrid-electric airplanes. Developing batteries that weigh less and produce more energy will primarily pace deployment.

The industry believes SAF is the best long-term solution to reduce emissions across the global fleet. Boeing has been a leader in catalysing SAF development since the first test flight in 2008. We work with partners on six continents to enable sustainable sourcing and production.

Two recent passenger flights show the range and potential of different fuel sources — and how SAF production can help solve other problems.

Virgin Atlantic flew a Boeing 747 from Florida to London last autumn powered by SAF created from industrial off-gassing. Fuel producer LanzaTech believes the technology could be rolled out to two-thirds of the world’s steel mills, which would substantially reduce industrial CO2 emissions and produce enough fuel to meet 20% of current global commercial aviation demand.

Last January, an Etihad Airways 787 Dreamliner flew the world’s first flight powered by SAF made from plants that grow in the desert. Fish and shrimp raised on this unique ecosystem in the United Arab Emirates fertilise the plants before they’re harvested to provide food for a nation that imports nearly 85% of its needs (watch a video).

One-fifth of the world is desert and a significant portion is located along coastlines — making this fuel source another scalable option.

The International Air Transport Association estimates it’s possible to achieve supplies to meet 2% of aviation demand by 2025. But scaling up production and enabling widespread availability of price-competitive SAF for airlines are the key challenges.

The vast majority of SAF used to date has been produced by World Energy at its facility near Los Angeles, where California’s Low-Carbon Fuel Standard program applies. Government incentives to support other new facilities would accelerate development and help drive down price, encouraging further adoption.

Flying has transformed the world. Continued innovation and industry collaboration with governments and other stakeholders will help aviation grow sustainably — providing valuable socioeconomic benefits into the future.