May 27, 2021 – The final event of STEM 4 future, the educational program promoted by Boeing Italia with the support of ScuolAttiva, took place virtually today culminating an intense year of activities for the over 200 students involved. Since 2017 Boeing has been promoting knowledge and interest in scientific subjects at schools, in collaboration with the prestigious Sant’Anna High School of Pisa and the Polytechnic of Bari. The STEM 4 future program is part of the P.C.T.O. (Pathways for Transversal Skills and Orientation) officially recognized by the Italian Education Ministry.

Today, the most deserving students of this 4th edition have been awarded following a creative competition called “The route to the future”. The team that has won the national title and played the best pitch is the Liceo Tito Livio in Taranto.

The awarded team will have the unique opportunity to participate in the #Boeing Experience, a series of corporate days to be spent in direct contact with the Italy team members of the aerospace company.

“If the sky has no limits, then we want these students also to have no limits in what they dream of and want to fight for,” commented Angela Natale, President of Boeing Italy and Managing Director for Southern Europe. “In spite of the pandemic, that created such a difficult and challenging context in which to operate, the students’ commitment was appraisable and notable. Boeing is proud of having led them to a successful completion of their didactical path, reaffirming our company’s strong belief in the value of education and STEM subjects.”

In its four editions, STEM 4 future has actively involved 5,028 students from secondary schools in various Italian cities, finding unanimous enthusiasm on the part of the young participants, and also of the professors who supervised the activities.

STEM 4 future has the full support of Boeing Italia in the wake of the activities that the company carries out with the “Boeing Global Engagement” division, in order to build and transmit values within the communities in which it actively operates.

Creator of the STEM 4 future format, ScuolAttiva Onlus has been a Boeing Italia partner for over 10 years in promoting education and cultural growth of the school world, contributing to the improvement of the education quality of thousands of students. 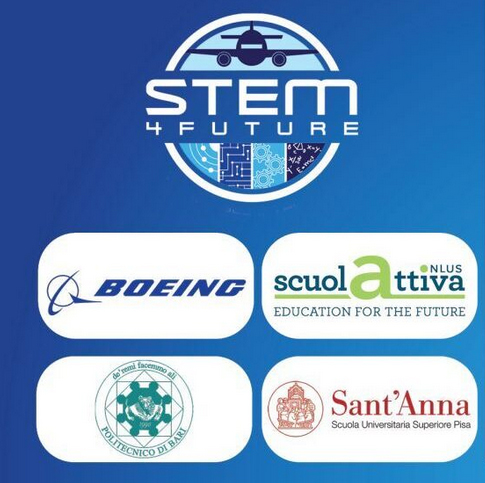