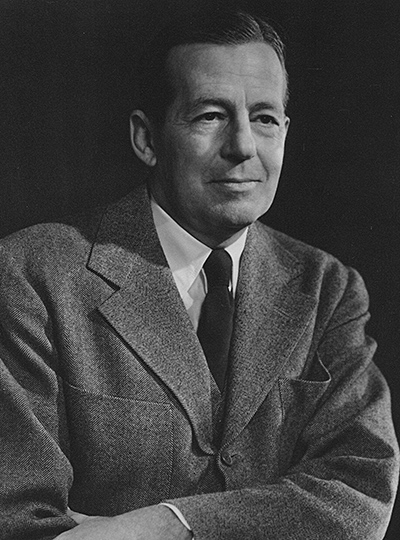 Donald Wills Douglas, the second son of an assistant cashier of the National Park Bank, was born in Brooklyn, New York, April 6, 1892, and started his education at Trinity Chapel School in New York City. At the age of 17, Donald Douglas entered the U.S. Naval Academy at Annapolis, Maryland, where he spent much of his time building and testing model airplanes. Douglas' family, fellow midshipmen and professors thought his interest in aviation would pass. They were very surprised when he left the Naval Academy in 1912, before he graduated, to look for work in aeronautical engineering.

He soon realized he needed to learn more about his chosen career field and completed the four-year Bachelor of Science program at the Massachusetts Institute of Technology in only two years. Because of his academic performance, Douglas was immediately hired at MIT as an assistant professor in aeronautics.

In 1915, he became a consultant to the Connecticut Aircraft Co. and helped build the first Navy dirigible. In August of the same year, he joined the Glenn L. Martin Co., then in Los Angeles, as chief engineer. In 1916, he served briefly as chief civilian aeronautical engineer for the Army Signal Corps Aviation Section in Washington, D.C., and married Charlotte Marguerite Ogg in Riverside, California. He took her to Cleveland, where Martin had relocated. As chief engineer, Douglas was in charge of building for the U.S. Army the MB-1 twin-engine bomber, which first flew Aug. 17, 1918, and its transport derivative.

In chilly Cleveland, Douglas and his family missed the balmy California climate, so in January 1920 his wife took their two sons back to Los Angeles, and he joined them in March. Douglas was determined to make it on his own, in spite of having only $600 and a family to support. To provide for his family, he worked as a laborer, hoeing potatoes and washing cars. His first aircraft order was from millionaire sportsman David R. Davis, who put up $40,000 to build an airplane to make the first nonstop, coast-to-coast flight.

The Davis-Douglas Co. was formed to build the Cloudster, which did not complete the flight but did become the first aircraft to lift a useful load exceeding its own weight. It ultimately became the flagship of Claude Ryan's San Diego-to-Los Angeles airline. Davis lost interest and sold out to Douglas, who incorporated The Douglas Co. in July 1921. He finally landed his own Navy contract — to build torpedo bombers, starting with the DT-1 (Douglas Torpedo, First).

By 1922, the company had delivered six aircraft for $130,890. Douglas leased the abandoned buildings of the Herman Film Corp. at 2345 Wilshire Blvd. in Santa Monica, California, where he built the Douglas World Cruiser. By fall 1928, the company was worth $25 million.

Despite the 1929 crash that started the Great Depression, Douglas kept his company alive and financially sound building military aircraft. In 1932, he started building the DC-1 and launched his career as a builder of transports. By 1940, sales of DC-2 and DC-3 transports and their military derivatives rose to nearly $61 million.

To keep up with World War II production, Douglas built plants at Long Beach and El Segundo, California, and leased facilities in Chicago, Oklahoma City and Tulsa, Oklahoma. The leased plants were closed at the end of the war, but Douglas continued to produce commercial and military transports, jet fighters, missiles and rockets.

Donald Wills Douglas Sr. was company president until 1957, when his son, Donald Douglas Jr., took over that position. Donald Douglas Sr. remained chairman of the board. At the age of 75, on April 28, 1967, Douglas merged his company with the McDonnell Aircraft Co. and retired. He remained honorary chairman of the McDonnell Douglas board until his death on Feb. 1, 1981.

He lived for almost a century and presided over the birth, the growth and the evolution of the aerospace industry.