Executive Biography of Elrey B. Jeppesen 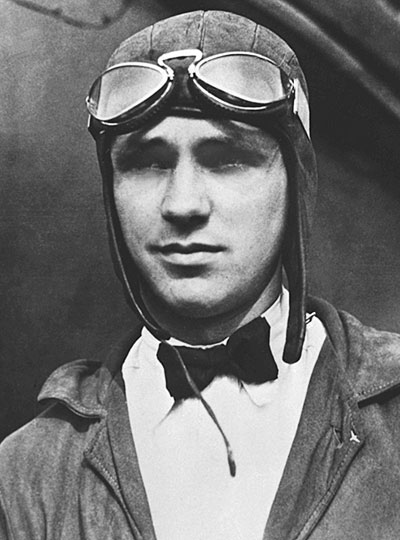 Elrey Borge Jeppesen was born in Lake Charles, Louisiana, on Jan. 28, 1907, and grew up in Oregon. At the age of 14, he made his first flight in a Curtiss JN-4 “Jenny” and was immediately hooked.

Jeppesen saved the money he made delivering newspapers and groceries and hung around the airport working at odd jobs. He took flying lessons and soloed after flying for only two hours and 15 minutes. Jeppesen had been accepted into the Massachusetts Institute of Technology’s aeronautical engineering program, but in his last year of high school, he bought his own Jenny for $500 and flew off with Tex Rankin’s Flying Circus instead.

He went on to work several jobs in the industry, including ferrying aircraft and doing aerial photography.

The onset of the Great Depression limited his flying hours. So in 1930, he joined Boeing Air Transport (BAT, later United Air Lines) as an airmail pilot flying the Model 40B between Salt Lake City and Cheyenne, Wyoming. In those days, pilots didn’t have anything in the way of charts, except for Rand McNally road maps. They flew anywhere from 50 to 300 feet above the ground, guiding mostly on terrain features and dead reckoning and following railroad tracks in bad weather. There was no radio or air traffic control.

Out of the 18 pilots flying the Cheyenne-Oakland (California) route, four were killed in the line of duty during the winter of 1930. The dangers of flying without any sort of guidance inspired Jeppesen to create his “Little Black Book”—a collection of navigational information for pilots to use during flight.

Jeppesen carefully scouted the various routes, taking photographs and writing notes. He climbed mountains and smokestacks, checked out emergency fields and the obstructions around them, and figured out different ways to get into and out of certain areas.

At first he just gave copies to his friends, but soon the demand became so great that he started to sell them. When low-frequency radio beacons became available in 1931, Jeppesen updated his black book to show pilots how to follow radio beacons, and added mileage reference charts and terrain elevation profiles.

In 1934, BAT became part of United Air Lines, and Jeppesen made headlines for his heroic efforts while piloting a United Air Lines Boeing 247. Flying over Illinois at dawn, Jeppesen spotted a burning barn and sheds. He kept circling the farmhouse until he woke up its sleeping occupants. Noted newscaster Walter Winchell heard about Jeppesen’s actions and sent him a bouquet of orchids as a reward. Jeppesen gave the flowers to his United flight attendant, Nadine Liscomb, whom he married two years later.

His chart business grew and Jeppesen, assisted by his wife, kept it going. He retired from United in 1954. In 1961, he sold the company to Times Mirror but remained as chairman. In 1974, Sanderson Films, a developer of training systems and pilot supplies that Times Mirror purchased in 1968, merged with Jeppesen's company.

Jeppesen received numerous awards and honors throughout his career, and was inducted into the National Aviation Hall of Fame in 1990. He died in 1996, and Boeing bought Jeppesen Sanderson Inc. four years later.