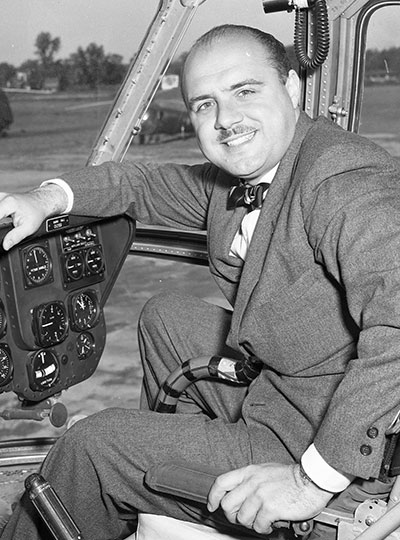 A trailblazer in the development of helicopters, Frank Nicholas Piasecki was born in 1919 in Philadelphia. He became fascinated at an early age with aviation technology, which at the time was an exciting new field.

He studied aeronautical engineering at the University of Pennsylvania and the New York University Guggenheim School of Aeronautics, graduating in 1940. While still in college, he founded the P-V Engineering Forum with a classmate, Harold Venzie. In 1943, Piasecki's group designed the PV-2, a single-seat, single-rotor helicopter that became the second successful helicopter to fly in the United States—the first was Igor Sikorsky’s VS-300, which took to the skies in 1939.

Piasecki was the PV-2's first pilot, by happenstance. He was sitting in the aircraft while testing its systems when the tether broke and the helicopter became airborne. Despite having only 14 hours of flight time in fixed-wing aircraft and no experience in helicopters, Piasecki managed to bring the aircraft to a safe landing. Soon after, he became the first person in the United States to qualify for a helicopter pilot's license. Piasecki remained the chief test pilot for the PV-2, as well as chief engineer and company president.

To promote the PV-2, Piasecki participated in a short film, called "An Air Flivver in Every Garage." The film featured Piasecki landing the helicopter in locations such as a golf course and a gas station. He kept the PV-2 until 1965, when he donated it to the Smithsonian Institution, where it is still on exhibit.

Piasecki was awarded more than 20 patents and received numerous other awards, honors and memberships, including Fellow of the Institute of Aeronautical Sciences, Honorary Fellow of the American Helicopter Society, recipient of Helicopter Foundation International's Heritage Hall of Fame Award, and donor of the Dr. Alexander Klemin Award, given annually by the American Helicopter Society for outstanding work in rotary-wing aeronautics.

In 1986, Piasecki was further honored when President Reagan awarded him the National Medal of Technology. In 2002, he was inducted into the National Aviation Hall of Fame, located at the U.S. Air Force Museum in Dayton, Ohio.

Piasecki died in 2008 at the age of 88 at his home in Haverford, Pennsylvania.