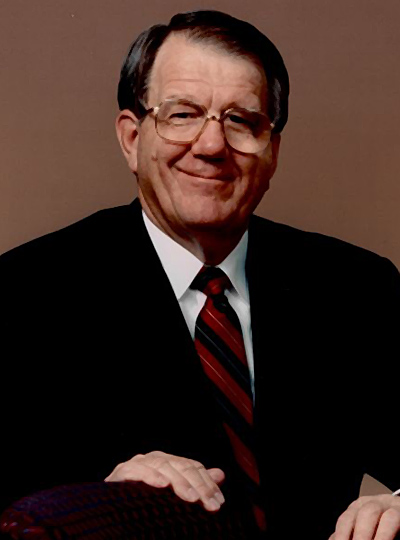 Harry Stonecipher was elected president and chief operating officer of Boeing in August 1997. He was elected vice chairman of Boeing in May 2001 and retired June 1, 2002. Stonecipher returned from retirement when he was named president and chief executive officer of The Boeing Company in December 2003. He resigned from that position in March 2005.

Stonecipher's career began at General Motors' Allison Division, where he started as a lab technician. In 1960, he joined General Electric's Evendale Aircraft Engine Product Operations, where GE produces large jet engines. He began as an evaluation engineer and progressed through the ranks in engineering, product support, marketing and program management.

He became vice president and general manager of the division's commercial and military transport operations in 1979 and then headed the entire division from 1984 to 1987. While leading GE's engines business, Stonecipher also served on the board of directors of General Electric Financial Services.

During his career at GE, Stonecipher participated in the development, support, sale and introduction of a number of engines for civilian and military application. He played a vital role in GE's providing propulsion for passenger aircraft (manufactured by Boeing, McDonnell Douglas and Airbus) and for military aircraft.

In 1987, Stonecipher left GE to become corporate executive vice president of Sundstrand, a worldwide market leader in the design and manufacture of technology-based products for aerospace and industrial markets. Shortly after joining Sundstrand, Stonecipher was elected president and chief operating officer and a member of the company's board of directors. He became president and chief executive officer in 1989 and assumed the additional office of chairman in 1991.

During his seven and a half years at Sundstrand, Stonecipher repaired the company's seriously damaged customer relationship with the U.S. Department of Defense. He also instituted self-directed work teams and developed outstanding relations with the union work force. The company's financial position greatly improved, and the quality-improvement processes implemented by Stonecipher's team helped Sundstrand's aerospace products become some of the most reliable systems in the world.

In September 1994, Stonecipher was elected president and chief executive officer of McDonnell Douglas in St. Louis, Mo. At that time, McDonnell Douglas was one of the United States' top defense contractors and a world leader in the development and production of aircraft, missiles, space systems and defense-electronics products.

Stonecipher is credited with enhancing the company's relationships with all McDonnell Douglas stakeholders -- including customers, suppliers and employees. He started a broad-based employee incentive plan and a "continuous learning policy." Stonecipher's team instituted high-performance work teams, established centers of excellence, refocused the corporation on quality and developed an award-winning advertising campaign.

McDonnell Douglas' financial performance soared under Stonecipher, with the stock increasing from $18.48 just prior to his arrival to more than $70 just before the company merged with Boeing in August 1997.

In late 1996, with aerospace-industry consolidation well under way, Stonecipher requested and received authorization from the McDonnell Douglas board to negotiate a merger with Boeing. At completion of the merger in August 1997, Stonecipher was elected president and chief operating officer and a member of Boeing's board.

Stonecipher received the Wings Club Distinguished Achievement Award for 2001. Other awards include the America-Israel Chamber of Commerce and Industry tribute in furthering US-Israel trade in March 2002, U.S. Army Association's John W. Dixon Award for more than forty years of defense and aeronautical industry leadership in February 2002, the annual Rear Admiral John J. Bergen Leadership Medal for Industry from the Navy League in November 1996 for his contributions to advancements in military aviation, the Air Force Association's John R. Allison Award in September 1996 for outstanding contributions to national defense by an industrial leader, and the Air Force Association's General Ira C. Eaker Historical Fellow Award in April 1996. In May 2002, he received an Honorary Doctorate Degree of Science from Washington University in St. Louis, Mo. In March 1998, he was named a Fellow in The Royal Aeronautical Society.