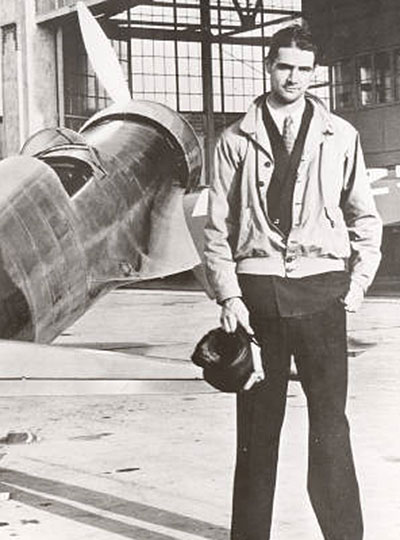 The only child of Howard Robard Hughes Sr. and his wife, Allene Gano Hughes, he was taking flying lessons from crop dusters by the time he was 15 years old. He attended the California Institute of Technology and Rice University, although he never graduated.

During his early years, Hughes was known as a movie director and producer. In aviation, Hughes was recognized as an excellent pilot and established early speed records in his specially designed H-1 racing aircraft. In 1938, he was awarded the Collier Trophy for a record around-the-world flight in a Lockheed Model 14. Hughes also designed the XF-11, a twin-engine, twin-boom, high-altitude reconnaissance airplane, and was almost killed when the airplane crashed during its initial flight in 1946.

In 1942, he began building the H-4 Hercules as the HK-1, a massive troop and cargo-carrying flying boat, nicknamed the “Spruce Goose.” Hughes took it on its only flight on Nov. 2, 1947. It flew 1 mile for about a minute at an altitude of 70 feet.

By 1976, the Hughes Tool Co. Aircraft Division was re-formed as Hughes Helicopters, which competed for both commercial and military helicopter contracts. The AH-64 Apache attack helicopter, still in Boeing production today, received the Collier Trophy in 1983, and Hughes Helicopters was acquired by McDonnell Douglas in 1984.

Hughes was awarded the Harmon Trophy as the world’s outstanding aviator in 1936 and 1938. He received the Congressional Gold Medal in 1939 for his 1938 around-the-world flight and, in 1940, the Octave Chanute Award. He was inducted into the Aviation Hall of Fame in 1973 and invested posthumously into the International Aerospace Hall of Fame in 1987.