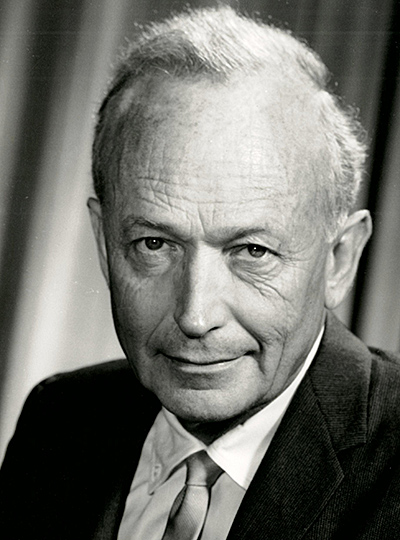 John Leland (Lee) Atwood joined North American Aviation Inc. in 1934, one year before the firm moved from Dundalk, Maryland, to Southern California. He previously worked at Douglas Aircraft in Southern California, builder of such venerable transports as the DC-3, so he would cross the country twice in a short time.

Atwood was born in Walton, Kentucky, on Oct. 26, 1904. He attended Hardin-Simmons University from 1924 to 1926, receiving a Bachelor of Arts, then completed postgraduate engineering courses at the University of Texas, earning a Bachelor of Science in 1928.

A number of leaders in the aerospace industry have described Atwood as "a chief engineer's chief engineer." His technical acumen was the driving force behind the company's evolution into an aviation and space leader that produced more military aircraft than any other company (a record which stands to this day). Among those aircraft: the P-51 Mustang, a swift, agile World War II fighter with an especially impressive record in the aerial war in Europe; the B-25 Mitchell bomber, used by Jimmy Doolittle and his Tokyo Raiders to turn the tide of the war in the Pacific; the T-6 Texan, which almost every U.S. and British WWII pilot trained in; and the F-86 Sabre Jet fighter, which exhibited a superiority of 10-to-1 or better against Russian MiGs in Korea.

As the company's aviation leadership continued after WWII, Atwood used his technical vision and managerial skills to establish his company as an indispensable national asset in new high-technology fields such as rocket propulsion, intercontinental ballistic missiles and the Apollo moon-landing program.

In 1967, Atwood merged North American with Rockwell of Pittsburgh to form North American Rockwell (later to become Rockwell International). During the consolidation, he provided leadership in his role as president and CEO of the new corporation, setting the stage for the company's continuing aerospace leadership as producers of the Space Shuttle and the B-1 bomber.

Atwood retired in 1970 but remained on the board of directors until 1978. Even after that, he maintained an active involvement with the company and its programs, and the company continued to regard him as an invaluable resource.

Under Atwood's leadership, the company and its employees captured three Collier Trophies, the aerospace industry's most prestigious awards, for their work on the F-100 supersonic fighter, the X-15 spaceplane and the B-1 bomber.

Among numerous individual honors and awards bestowed on Atwood were a Presidential Citation from Harry S. Truman for his contributions during WWII; the Air Force Association's Hap Arnold Trophy; and the Wright Brothers Memorial Trophy, awarded by the National Aeronautic Association. That association honored him again at a later date, declaring him an "Elder Statesman of Aviation" in ceremonies in 1976. Atwood was also an honorary fellow of the American Institute of Aeronautics and Astronautics — that organization's highest rank.