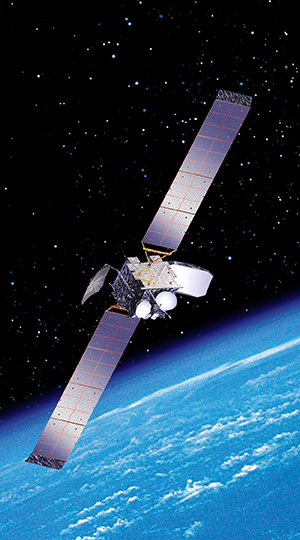 The Boeing 601 satellite was introduced in 1987 to meet anticipated requirements for high-power, multiple-payload satellites. It was designed for such applications as direct television broadcasting to small receiving antennas, very small aperture terminals for private business networks and mobile communications.

The 601 was originally developed by Hughes Space and Communications Company, which Boeing acquired in 2000.

A more powerful version, the Boeing 601HP, made its debut in 1995. The HP versions can accommodate payloads twice as powerful as the classic Boeing 601 models. They feature such innovations as gallium arsenide solar cells, advanced battery technology and an optional xenon-ion propulsion system.

The Boeing 601 body is composed of two modules: (1) the primary structure, which carries all launch vehicle loads and contains the propulsion subsystem, bus electronics and battery packs, and (2) a structure of honeycomb shelves that hold the communications equipment, electronics and isothermal heat pipes.

In the early 1990s, Hughes was contracted to participate in the development of two satellites for mobile communications services throughout North America. Hughes provided 601 spacecraft buses for the satellites.

AMSC-1 was launched on an Atlas rocket in April 1995. At the time it was state-of-the-art for commercial mobile communications. Each satellite has the capability to support 2,000 radio channels in L-band. The footprint covers the entire continental United States and Canada as well as Alaska, Hawaii, Puerto Rico, the Virgin Islands, and 200 miles of U.S. and Canadian coastal waters.

The operators provide complementary mobile telephone, radio, data and positioning service to land, aviation and maritime users. Each operator also provides the other with backup and restoration capacity.

The Boeing 601 satellite has been one of the best selling spacecraft models. More than 80 have been delivered to customers around the world.