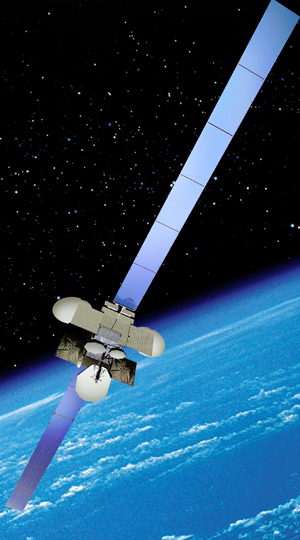 The body-stabilized Boeing 702 was announced in October 1995 by Hughes Space and Communications Co. Evolved from the popular, proven 601 and 601HP (high-power) spacecraft, the Boeing 702 is the world leader in capacity, performance and cost efficiency.

The first 702 satellite was launched in 1999. The satellite could carry more than 100 high-power transponders and deliver any communications frequencies that customers requested.

The 702HP configuration carries a modern lithium-ion power system and other features designed to operate at power levels greater than 12 kilowatts. This higher-power capability is required for satellite telephone systems and fixed satellite services. The 12-kilowatt-range 702MP is powered by a bipropellant system and can accommodate a wide range of payloads and hosted payloads for commercial, civil and government customers with lower power requirements.

By March 2010, Boeing had sold 28 702 satellites. Those in service had accumulated 867,000 hours of service life for both commercial and military customers. In 2012, Boeing introduced the Boeing 702SP (small platform), an evolution of the Boeing 702 satellite. It coupled proven technology from Boeing’s previous designs with next-generation technology and processes, resulting in an affordable, lightweight alternative design. 702SP passed its critical design review in May 2013.

Because of its lower mass and weight, two 702SP satellites can be launched on a single launch vehicle, resulting in a cost savings of up to 20% when compared with existing launch options.